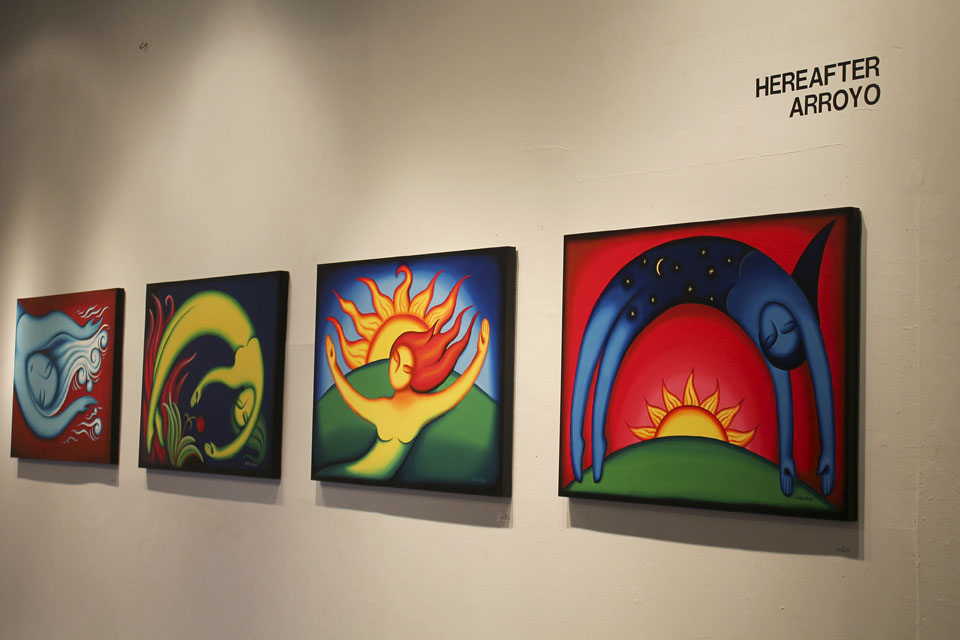 In one of the pieces in Andrea Arroyo's art exhibit "Hereafter," a figure, her body glowing with constellations, forms a gentle arch over the sun. Her eyes are closed, and her posture is graceful, but the impression one gets from the painting is not submissiveness, but the quiet resilience of the female spirit.

The idea of what makes a powerful woman links all of the works in the exhibit, currently on view in the Grady Alexis Gallery at El Taller Latino Americano on 104th Street and Broadway.

The exhibit is made up of artwork from several previous projects, including "Fragments," a series of Arroyo's small paintings that focuses on individual parts of the female body.

Many of the pieces focus on the portrayal of women in myth, an interest that was first piqued in Arroyo by her background in dance.

"When I was a dancer, there were a lot of works in dance based on mythologies and history,"  Arroyo said. "I started from Mexican mythologies, because I'm originally from Mexico, then I expanded and have been doing research on works about women from history and mythologies from all parts of the world. It's a resource and inspiration that never end," she added.

Arroyo's works feature female characters from a multitude of cultures, celebrating the beauty and resilience of the female body and spirit. To do this, Arroyo uses fluid, flexible lines, which she said are also influenced by her dance experience, which she said familiarized her with the "form in three dimensions" and the capacity of "the body as a tool of expression."

Arroyo emphasized that the purpose of her work is to serve as a medium for her audience to make connections between mythological figures like Eve and the Egyptian goddess Nut, and everyday women.

Some of the pieces in the exhibit are taken from her ongoing project, "Flor de Tierra," which pays homage to the 400 women from Juarez, Mexico, who have gone missing or been killed in the past decade.

"What I try to do is draw a parallel between the victims, who are often nameless and faceless, and the great mythological characters that everybody knows," Arroyo said. "These women were murdered when they were young, and humanity lost the opportunity perhaps to have the next Frida Kahlo, Rosa Parks, the next great scientist or politician."

At its core, Arroyo's work, for her, is about making a difference.

"I think I can use art to bring light to some of these issues that are important," she said. "If I can have one of the people who come to my shows, see my website, or read my articles to take action, or at least to find out more about these issues, I believe we actually can change the world."

"Hereafter" is on view at the Grady Alexis Gallery, El Taller Latino Americano, through Oct. 4.