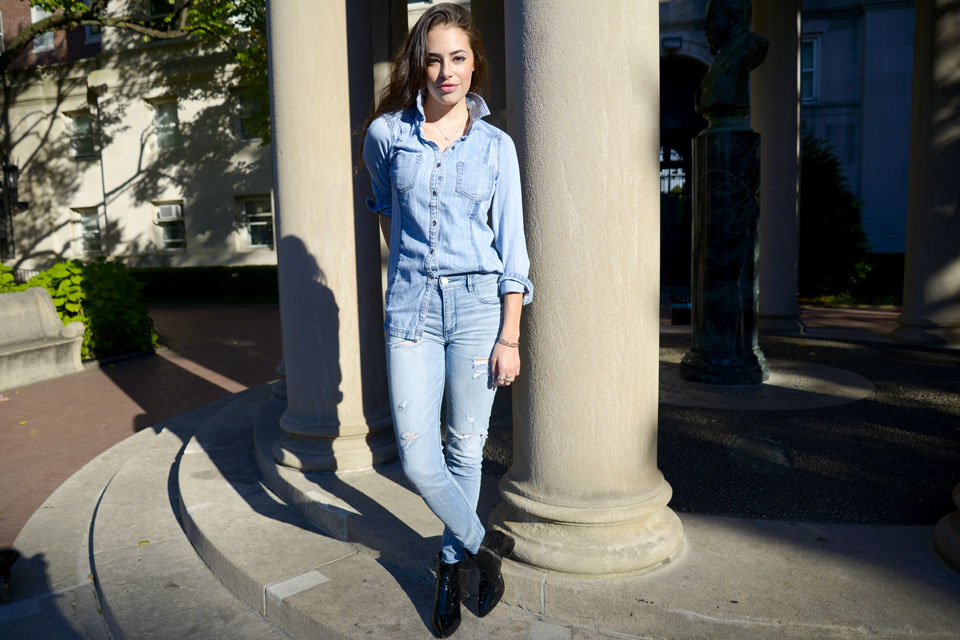 Chloe Bridges, a TV and film star, has just started her first year as a student in the School of General Studies. Known for her roles in "Camp Rock 2: The Final Jam," "The Carrie Diaries," and, most recently, as Sydney on "Pretty Little Liars, Bridges is now taking a break to focus on her education. Spectator sat down with her to discuss her time at Columbia, her life in Hollywood, and her plans for the future.

Hannah Corrie: Why did you want to come to Columbia? You've mentioned educational aspirations, but why Columbia specifically?
Chloe Bridges: Honestly its location was big for me. I only applied to two schools, NYU and Columbia, because I did want to be in New York. I've been here for the past two years off and on, and I just really love it here, so that was a big one for me. I was in Los Angeles for 10 years, almost. So I'm kind of ready to go to a new place. The whole college thing—I never got to do that where you like go away from home. And this isn't quite that, because we are in a huge city, and I have a life outside of here—I'm not like living in a dorm or anything like that—so I'm not getting the full integrated college experience, but it's nice not to be in LA.

HC: Even though you're here, are you doing any projects?
CB: I kind of don't want to work my first semester here, because … you know, it's a lot of work, and I'd have to fly back to LA, so it would be a lot of traveling, ... but I've let Pretty Little Liars know that if need be I can travel because I planned my schedule so it's on Tuesdays, Wednesdays, and Thursdays. So theoretically I could fly in Thursday night and be there Friday morning, work Friday, work Monday, and then fly back, but we'll see. I do want to focus on school, but if they need me, I'll definitely be there.

HC: I heard that your character on Pretty Little Liars was written specifically for you?
CB: Pretty Little Liars did that for me. They had met me years ago, and I wasn't right for whatever it was at the time, and then down the line they waited for me, and they wrote this for me, and a similar thing happened with Camp Rock. I auditioned for Demi Lovato's role, and I didn't get it for various reasons. It was between me and her, and then later down the line I was more right for the second movie. So it's just based on so many factors, and just because you don't get one part doesn't mean they don't like you. You don't really know what kind of connections you're making at the time that might come to fruition.

HC: Would you consider joining the acting community at Columbia, or are you trying to do something different?
CB: Yeah, I mean the idea was that I didn't want to major in anything creative in nature, and I've done the math for my credits, and in order to graduate I don't need any credits for my electives or anything like that. Just my core and my political science credits are more than enough, so I don't need to take anything. But I am here, so you never know.

HC: How do you deal with people recognizing you on campus? I have a friend who told me she stopped you to take a selfie. Does this happen a lot?
CB: It happens a good bit. I'm happy to do it, I'm happy to meet people. It's fun. The only time it's a concern is when I'm on my way to class. And in a couple of my classes, they care if you're late, they'll write you down for being tardy, and if you have a certain amount of late marks then it counts as an absence. … So that's the only time where I'm like, alright you gotta walk with me, you gotta keep moving. But otherwise I like it. It's fun.

It is strange in a way because this is my first time being in a classroom full-time and being on a campus since my junior year of high school, and my junior year of high school was before I had done anything that anyone would know or care about. So that whole thing is new, like having people in my actual classes know who I am going in. But I don't think it really affects anything, it's just kind of like a strange thing to get used to, but it doesn't actually affect anything in a tangible way.

HC: What advice would you give to aspiring actors at Columbia who want to make it in the business?
CB: Obviously, practice. Work on your craft and make sure it's something you really want to do. LA's a really different place. Nobody cares if you have a college degree. I mean, obviously the fact you went to Columbia is cool, and they're going to be impressed, but it's not going to get you jobs. It's not going to affect anything in that kind of way. In Hollywood, people don't really care. It's a lot of just being right for that particular character, or if you happen to have the essence of who they think that person is. So I guess just the biggest thing I try to say is it's not guaranteed in any way. Absolutely follow your dreams, because when it's good it's great. It really is. But it's very unstable and very unpredictable.