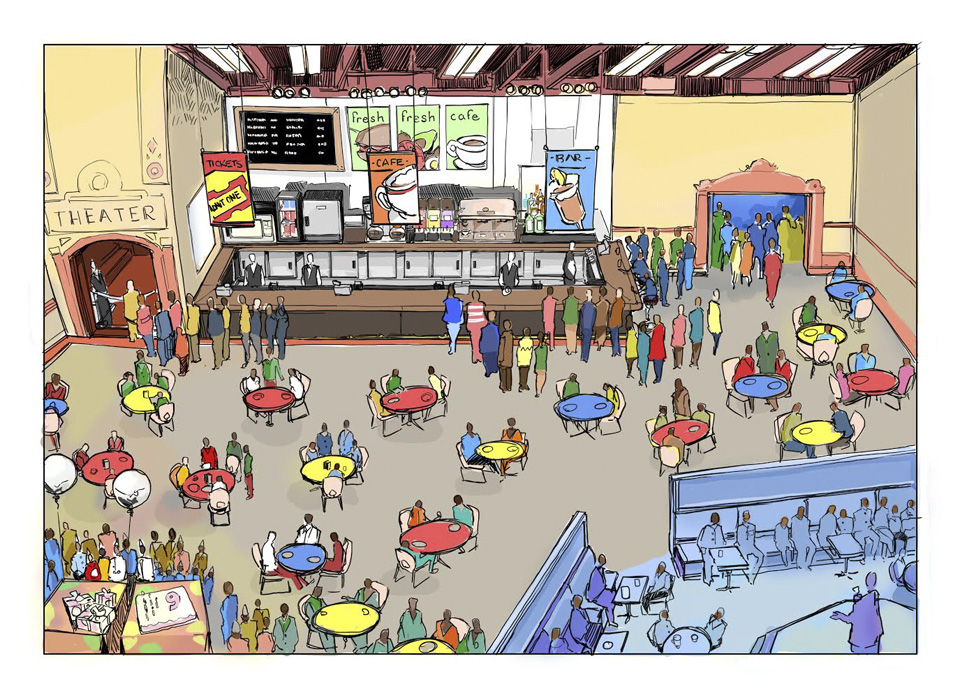 An artists rendering of Harlem Independent Theater, which is working to raise $30,000 by Nov. 25 in order to secure a small business loan to create a theater and community space uptown.

The Harlem Independent Theater—an affordable movie theater, event space, and café and bar on track to open next summer—has launched a campaign to raise $30,000 by Nov. 25.

The idea for HIT was conceived by Mark Blackman—an informal educator, comedian, filmmaker, and eight-year Harlem resident—and Eleanor Luken, an environmental psychology Ph.D. at the City University of New York. A few years ago, Blackman and Luken noticed a lack of movie theaters and spaces where artists could interact with the community in West Harlem and the two have been developing the concept of HIT ever since.

"People will be able to come to HIT to see a movie, but they will also come for drinks, food, shows, and just to chill and use Wi-Fi," Blackman said.

HIT got second place in a New York Public Library business plan competition last year, where it received a prize of $7,500. Blackman and Luken launched the fundraising campaign on Oct. 28 to get the remaining $30,000 needed to secure a small-business loan.

"We are over 51 percent," Blackman said. "We're in the middle stages right now, and it's a lot of work to get contributions—a combination of reaching out to personal contacts and co-hosting community events in Harlem."

Blackman, who partnered with other local comedians to make a feature-length film, "Welcome to Harlem," said that he already has many contacts within the community. For wider outreach, HIT will be hosting events throughout Harlem that include screenings of web series that include discussions with the creators, movie trivia nights, and screenings of films like "The Hunger Games."

"We want to raise awareness, and, assuming we are opening next summer, we will need programming partners in local organizations, artists, and filmmakers," Blackman said. "So it's a great opportunity to be connecting, because we want to be for the community."

The Black and Latino Filmmaker's Coalition and the Harlem Arts Alliance have both partnered with HIT and are contributing to fundraising efforts, Blackman said.

Babatunde Odesanya, founder and chief operating officer of the Black and Latino Filmmaker's Coalition, said in an email Friday that the group plans to assist HIT's fundraising by hosting a "Webseries Wednesday" at Double Dutch Espresso on Frederick Douglass Boulevard on Nov. 12 as well as promoting the campaign at the group's other events.

"Finally, we have the chance to have a venue for true cultural expression of the indie filmmaker in NYC," Odesanya said in an email. "The community will gain access to affordable quality programming."

Luken, who focuses on the interaction of people and places, has done research on the history of cinemas in Harlem.

She said that her research has shown that there have been nine different cinemas in Community Board 9's district in the past century, none of which still exist today.

"Plenty of people are going to movies," Blackman said. "But they are going out of the neighborhood."

Blackman noted that although there is an AMC theater on 125th Street, HIT would fulfill a different niche for Harlem residents. The location would be further uptown, and HIT would screen different movies than the typical AMC selection—second-run, half-price, local, indie, and old films, Blackman said.

"There's really nothing in West Harlem, and it'd be incredible to create a space where ticket prices are accessible to a lot of families in our community, who don't make tons of money and can't afford a $16 movie ticket," said Barry Weinberg, CC '12, a financial analyst who lives nearby, and a member of CB9's Arts and Culture Committee since 2013.

Blackman said that they are looking at spaces around 145th Street of about 12,000 square feet.

They have begun discussions with local architect Robert Washington and local contractor Jesus Nova, whose family formerly owned Nova Theater, which closed in 2002 and is now a dollar store owned by Nova on Broadway between 147th and 148th streets.

The initial floor plans include three screening rooms, with the largest seating 150 to 200 people, Blackman said, and there will also be a large, open space that can be used for various activities.

"It's an all-inclusive sort of venue, so our competition is, if anything, closer to watching Netflix at home, except what we have is the experience you are getting," Blackman said.