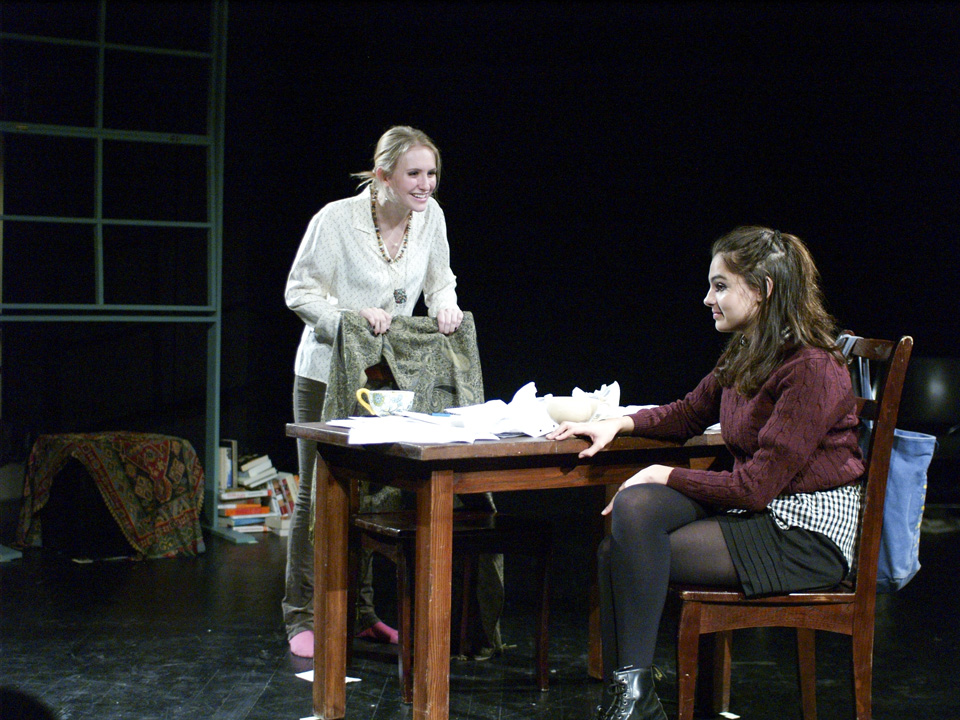 Juliette Kessler, BC 16, left, and Sophia Richards, BC 18, star in Collected Stories.

This weekend a play on campus will examine what happens when the relationship between mentor and student shifts from mentorship to friendship to rivalry.

From Nov. 13 to 15, CU Players will present "Collected Stories," a two-woman play by Donald Margulies that chronicles the relationship between a professor and her student over six years.

The play, set throughout the early 1990s, explores the dynamic between acclaimed writer Ruth Steiner, played by Juliette Kessler, BC '16, and her protégée, friend, and eventual competitor, Lisa Morrison, portrayed by Sophia Richards, BC '18.

"The play captures how their relationship evolves over time, but also how they both abuse that relationship," director Talley Murphy, BC '17, said.

The budding friendship between mentor and mentee begins to deteriorate when, in her first novel, Lisa writes about the relationship between Ruth and poet Delmore Schwartz. This leads to a complex discussion about the ownership of stories—does Lisa have the right to disclose another person's private life for the sake of her own art?

"There are many different, critical ways to think about ownership and appropriation. I think the play causes one to think about those things in a more complicated way," Richards said.

Alongside this multifaceted issue, the play attempts to explore feminism and how its definition has developed over the years.

The play puts two different conceptions of feminism into conversation.

"Especially in a time where the word 'feminist' has become sort of taboo, I think seeing these two women from completely different times of women's history and of feminism is very important," Kessler said.

Because the cast is so small, both actresses are able to delve deeper than normal into character development and analysis.

"It has given us a lot of freedom, in that we can really move as quickly or as slowly as we want to, and really spend as much time in these characters as we possibly can," Murphy said.

Since the story spans six years, the characters are completely different people at the end compared to who they are in the beginning. Their connection is altered over the course of the play as well.

"The relationship that is developed between these two women onstage—it's so in-depth, it's not a simple dynamic," Kessler said. "But because it's just a two-woman show, there is time to elaborate on it. The audience really gets to see life for these two women, and how the relationship develops."

Murphy said that watching only two people interact over a 90-minute period will be rigorous for audience members because of the complexity and rawness of such a relationship. However, she hopes the script's Aristotelian nature will make it a cathartic experience as well.

"In the end, it's this really beautiful story about what it means to be in a relationship with another person—sort of what we owe to each other," Murphy said. "There are very few things that are more universal and more critical to each of our experiences than that."

"Collected Stories" will be performed Nov. 13 to 15 at 8 p.m. in the Austin E. Quigley Black Box Theatre on the fifth floor of Lerner. Tickets are $5 with a CUID.