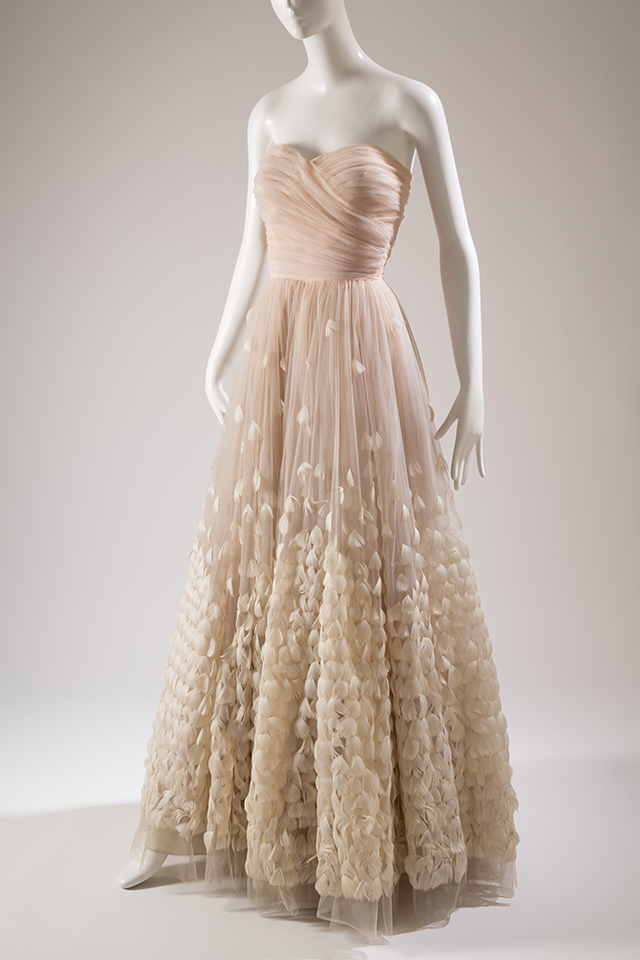 A counterfeit dress on display at the Museum at FIT's new exhibit.

Imagine a lustrous array of the most sumptuous, high-fashion runway pieces fresh from the newest couture collections, all sporting one little label sewn to the inside of each hem. You look at the label—but instead of finding an ostentatious French couturier you find the name of a fruity American boutique. No Balenciaga, no Givenchy.

"Faking It: Originals, Copies, and Counterfeits," is on display at the Museum at FIT until Apr. 25, 2015, showcases the art of counterfeits, replicas, and piracies in the fashion world. It examines how couture culture has evolved to accommodate the production and sale of fakes—from unauthorized copying of '20s evening gowns to Chinese near-identical reproductions of contemporary goods.

This is the reality of counterfeit fashion, a subversively popular practice that stretches as far back as the early 20th century. Since the 1900s, women have fawned over the elusive charm and empowering exclusivity of European haute couture labels and—no different from today—have been too broke to afford it. But some refused to let their economic status stop them. Thus, we see the emergence of a fascinating counterfeit culture in all forms of fashion.

The exhibition is housed in a subtle, low-lit room at the museum, made elegant by the eerie counterfeit gowns of the last few decades lined up in the displays. What appears to be a beautiful Balmain gown hangs unassumingly on a mannequin in a dimly lit corner of the room, but when approached, its label reveals the department store in which this unauthorized copy was pieced together.

Ariele Elia, curator of the exhibition, explains that throughout history, the practice of counterfeiting in fashion has been aesthetically accurate—both authorized and unauthorized copies were almost impossible to distinguish from their authentic counterparts. She points to the very first display in the exhibit, a 1966 Coco Chanel day suit, and a 1967 licensed copy to its right. "You can't really tell the difference between the two at first," Elia explains, "but if you look closely, or look at the inside details of the fabric, you'll start to notice things aren't the same." What sets the originals apart from their replicas (aside from, of course, the overrated prestige of their designer name) is the pure quality of their manufacturing, the attention to detail that comes from the handcrafting of the meticulous artisan as opposed to the crude and efficient work of the factory machine. The unauthorized copies of '50s and '60s Dior dresses sport fake seams, paint-dipped buttons, and misaligned stitch patterns.

The late '80s and early '90s saw the emergence of a strange phenomena in fashion accessory culture. Known as "logomania," label obsession came as a result of increasing trademark and copyright restrictions on designer collections. The emergence of the famous Louis Vuitton, Chanel, and Gucci purses (a few of which are exhibited along with their counterfeit doubles), their logo pattern-printed on leather and molded into their clasps, countered an increasingly accurate factory counterfeit movement emerging in China. Elia points to one of the pieces, a small Chanel 2.55 black flap bag, and explains the differences between it and its knock-off double. "From the outside, they're really identical. The fake actually looks more like a Chanel bag than the real one does, but if you open it, you can tell the quality is much worse. They both still have the lipstick and compact pockets, but the inside lining in the knock-off is much cheaper."

The exhibit ends by examining modern, low-cost boutiques that continue to make good quality replicas of runway fashion. Ariele gives particular attention to the ease with which one can purchase counterfeit products through online platforms like Amazon and eBay. "It is so much easier to buy knockoffs and good counterfeits online now with the accessibility that people have to sell them online, which adds an entirely new dimension to the spread of counterfeits and the difficulty that comes with regulating their sale," she explains.

"Faking It" leaves you with a lingering urge to pick up a factory-made Chanel 2.55 bag from the nearest street vendor just to ask, "Is this fake?"