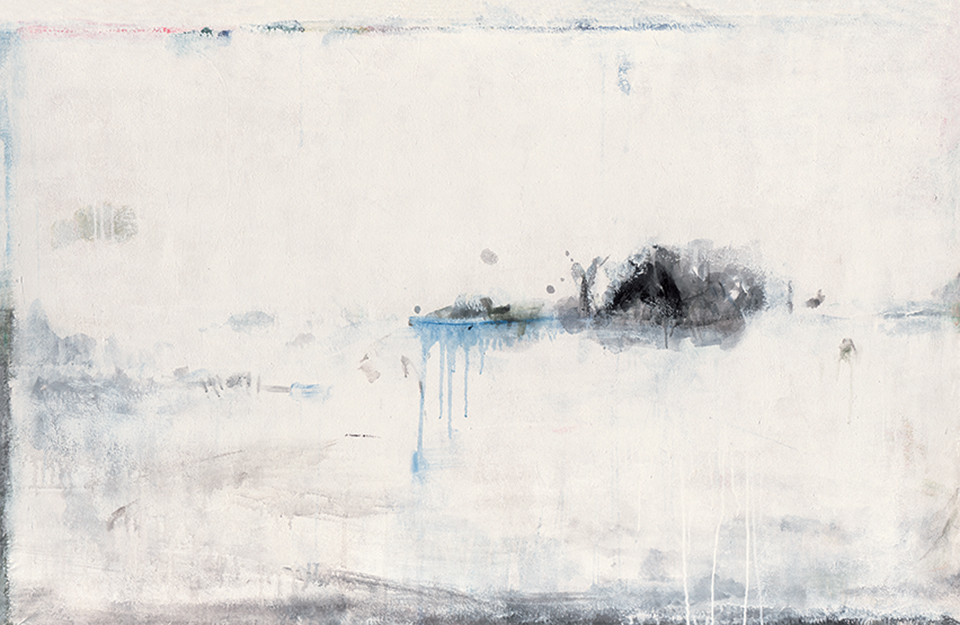 While some contemporary Chinese artists such as Ai Weiwei and Yue Minjun have made waves in the United States with unsettling and provocative works, their more traditional-leaning counterparts have received considerably less exposure. With "West Lake," an exhibition of new and recent work by the painter and printmaker Yan Shanchun, Chambers Fine Art in Chelsea seeks to show how subtlety can be more affecting than shock.

"We think that he is a painter of great merit who is not as well-known as he should be," John Tancock, director of the Chambers Fine Art gallery, said. "Whereas many younger artists have become household names, that's not yet the case for Yan Shanchun, so we aim to make him more familiar."

The "West Lake" series acts as a comprehensive introduction to Yan's work, which has rarely been exhibited outside of China. Consisting of large-scale paintings and prints produced with copper plate etchings, the series portrays the traditional subject of West Lake interpreted through an idiosyncratic and highly contemporary artistic method.

West Lake, a site of immense natural beauty situated in Yan's hometown of Hangzhou, has remained an enduring image throughout Chinese artistic history, with numerous artists and poets drawing inspiration from its serenity and grace. By choosing the lake as his subject, Yan consciously inserts himself into this artistic lineage, making his distinct approach to representing the lake all the more intriguing in comparison.

Rather than emphasizing the blue-grey sheen of the water's surface or the verdant bloom of the surrounding forests, Yan's ink paintings depict washed-out landscapes with translucent layers of white paint obscuring all but the most basic outlines of his scenes. By applying multiple coats of ink and acrylic, he achieves an eerie, ethereal effect, alluding to the accumulation of memories—both personal and cultural—that have been attached to the lake throughout history.

Yan trained at the Zhejiang Academy of Fine Arts, China's first art university, where he graduated in 1982 with a degree in printmaking, but became an accomplished ink painter as well. Ink painting holds an especially revered place in Chinese art history, which has traditionally regarded it as the highest art form. Yan's repurposing of that time-honored technique in a contemporary and abstract context, though subtle, is nothing short of a quiet revolution.

Equally progressively, Yan reworks traditional printmaking techniques to create unearthly, metallic images of the lake. Yan has developed his own method of producing copper plate etchings by mixing sulfur and olive oil to create a corrosive agent, which allows him to incise furrows into the metal and then print images onto Japanese ganpishi paper. The combination of soft metal and the fibrous, parchment-like paper forms detailed images more reminiscent of scratched steel or tree bark than a natural landscape. As a complement to the large-scale paintings, these prints encourage the viewer to examine the finer details of the lake that their canvas counterparts gloss over.

To mediate this interaction between the viewer and the artwork, Tancock approached structuring the exhibition from an atypical angle.

"He [Yan] very much feels that rather than being framed behind glass and hanging on the wall, the prints should be examined carefully by the observer," he said. "So we're going to try to encourage people to examine very closely and examine the incredible variety of textures that he's able to accomplish in this process."

Past attempts to connect viewers more closely with artworks have often been unsuccessful. Famously, Ai Weiwei's 2010 interactive sunflower seed installation at London's Tate Modern was closed off to the public after visitors began pocketing the porcelain seeds as souvenirs. Yan may be set to succeed where his more celebrated counterparts have failed.

Though his work is less eye-popping and outrageous than that of Ai or Yue, Yan highlights how provocative it can be to reinterpret tradition rather than deviate from it. Though he does not have the name-brand recognition of some of his contemporaries, this exhibition is a step toward changing that.