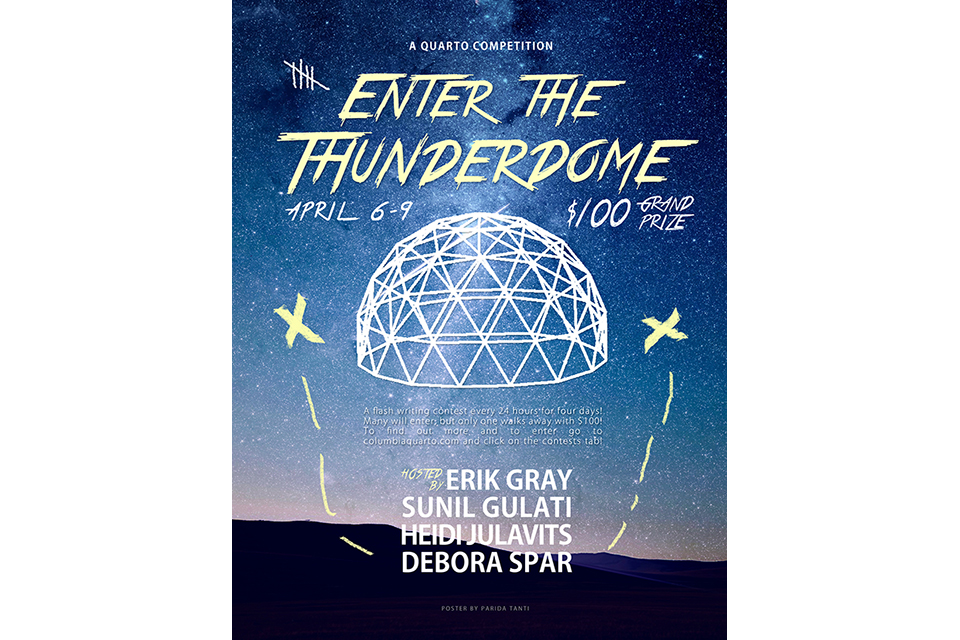 At the end of the contest, one student, chosen from the four winners of each day, will receive a $100 cash prize.

Quarto, the official literary magazine of Columbia's undergraduate creative writing program, is hosting its first flash fiction contest, ENTER THE THUNDERDOME, next week, from April 6 to 9.

"For four days next week, starting 12 a.m. on Monday, we're going to be uploading a video of a guest announcer presenting an object. And then students will have 24 hours to submit a piece of 300 words or less about it," Ikem Leigh, CC '15 and one of the executive editors of Quarto, said.

Quarto, over 65 years old, is one of Columbia's oldest literary publications. It boasts an impressive lineage of contributors, such as Louise Glück, the Poet Laureate in 2003-04, and Nobel Prize winner Wole Soyinka.

But it's not all about old talent. The magazine elects a new board every year, and each board brings something fresh and original, in terms of events and content, to the magazine.

The flash fiction contest, a brainchild of the current board, is nothing like any of the magazine's previous events. It is experimental and searches for something distinctive in fiction—a goal reflected in its unusual name.

"We don't feel that there's enough intensity to writing," Leigh said. "There's not enough terror and fear associated with creative writing, and we want to up the challenge by calling it 'THUNDERDOME.' We really want to scare people!"

Flash fiction is a genre that condenses big ideas into small spaces. It demands brevity and a certain degree of spontaneity. But most importantly, it supports the magazine's aim of getting more people involved in the creative writing scene on campus.

"To write a longer work—like a complete short story, a collection of poems—the reality is that unless you are a creative writing student, you don't have the time. So it's cool to have an event where the limit is 300 words and 24 hours," Leigh said.

Quarto aims, through the event, to bring together more people and to discover talent in the unexpected places.

"The contest offers an opportunity for students to participate in creative writing at Columbia, which can sometimes feel barring for those not directly involved with that community," Leigh said.

Leigh has been thoroughly impressed and humbled by the talent he has seen at Columbia and at Barnard.

"But the incredible thing," he said, "is that sometimes it is a person who has never taken a creative writing class who will amaze you by the stuff they produce."