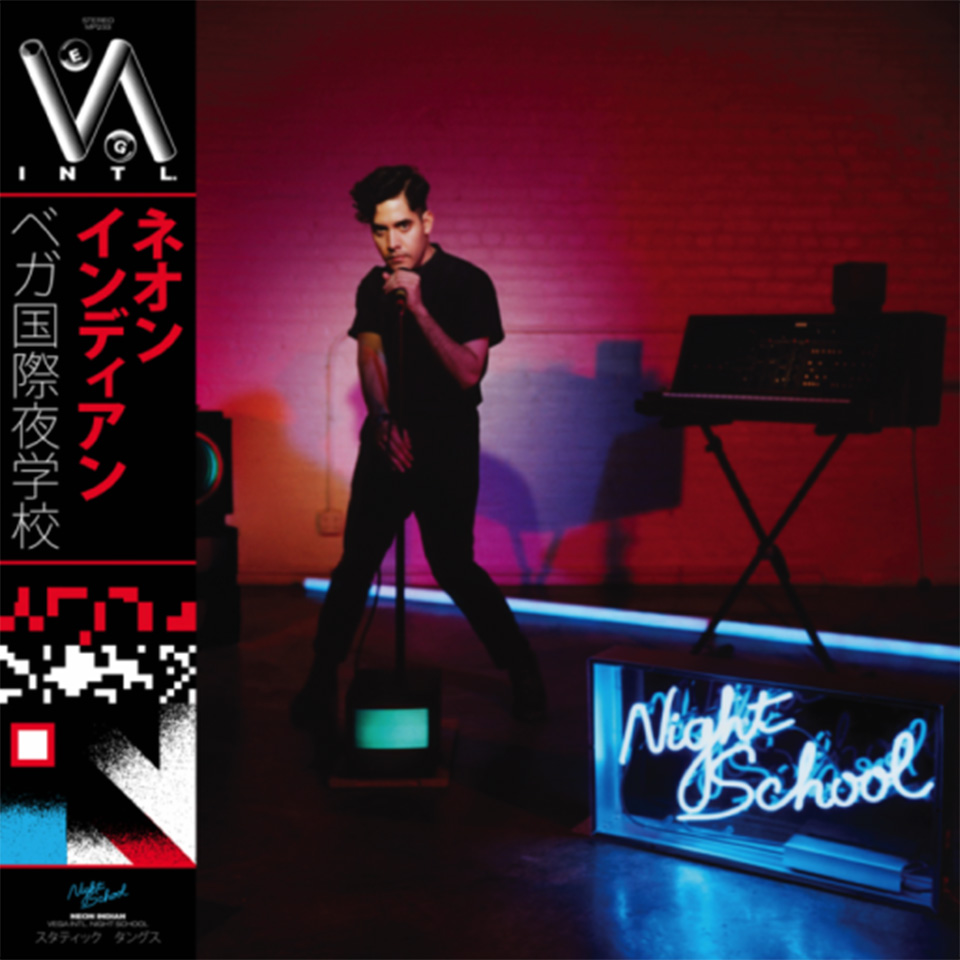 Best known as one of chillwave's forefathers, Neon Indian's Alan Palomo embraces the sleazier side of 1980s pop on his latest record. Inspired by cult New York movies and his own late-night mischief making, "VEGA INTL. Night School" refigures Palomo as a Dan Bejar-like lothario, with an arch and verbose sense of humor. It's his easiest collection of songs yet to dance to, although his joyfully off-kilter production makes them unlikely to appear in any but the most adventurous DJ sets.

Spectator caught up with Palomo to discuss the genesis of the record, Manhattan mythologies, and his formative experience with phone sex lines.

NOAH JACKSON: You released "Era Extraña" in 2011, then practically disappeared for the next four years. What went down?
ALAN PALOMO: Essentially, a lot of things that weren't related to music specifically. I'd done the first two records back to back and it was very much so this "Zeppelin II"-style ordeal with the second record. It was written between tours in hotel rooms, wherever I had time to do that, and as much as I love that record, it signified the difference between making music for yourself as a means of expression and having to do it as a means of vocation. After that experience, I didn't want to write another Neon Indian record until it really warranted its own existence. I'd been living in New York for a few years at that point but I hadn't spent much time there, so I slowly set up shop in my apartment and started chipping away at songs. In that interim, I directed a short film, wrote a screenplay, and did some stuff that to me was really palate-cleansing.

NJ: Talk me through the album title. Why "Night School"?
AP: The night school component was more this analogy to what the content of the record is. I feel New York is a city that gets mythologized by a lot of filmmakers. It's always interesting to see this warped perception of it through whatever that auteur's lens is. My aspiration was to make some kind of fucked-up reimagining of what my time in New York has been, some grotesque, cartoonish account that's partly truth and partly fiction. If I couldn't do it through film, then I would certainly do it through music.

NJ: The visuals for the album are particularly striking. Did you design them yourself?
AP: I worked with Robert Beatty, who's done a lot of creative stuff for Oneohtrix Point Never and most recently the Tame Impala album. The intent was to create these individual totems. Some are completely made up and some are references for those who are able to catch them. We would just be texting each other goofy images that we thought might be funny to see illustrated, then tried to reconfigure that into some larger sculpture. To some extent, the art is kinda like artifacts from the universe of the record itself. If this record were some after-hours screwball comedy about New York, then these would be the props that would symbolize the plot points.

NJ: With song titles like "Smut!", the album comes across as very tongue-in-cheek.
AP: I take the process of making music very seriously, but not myself. There might have been a moment where I drank the Kool-Aid and really began to sweat what it meant to be a musician by trade. At some point, in order to come back to making this record, the comedy was necessary to approach it. Making something of that scope should only be approached with joy, otherwise why do it? That's when I was telling myself, "If it ever stops being fun, you can always go back to film school." Having that freedom to know that it doesn't ever have to happen allows it to simply just happen.

NJ: You also created a pseudo-phone sex line to promote the album. Was that part of keeping it fun?
AP: The sleazier components of the record lent themselves to having something like that. If "VEGA INTL. Night School" is, in fact, some institution, to take the metaphor into a more literal place, it was complete comedy gold to be like, "Oh yeah, it's a phone sex line." It's like any phone sex line I tried to call as a kid, dialing from a pay phone with your brother and giggling at the idea of some scantily-clad girl whispering at you on the other end of the line but not having the adult means of paying for something like that.

NJ: If you taught a night school class, what would you teach?
AP: Crocheting? Maybe furniture restoration or advanced tire changing.