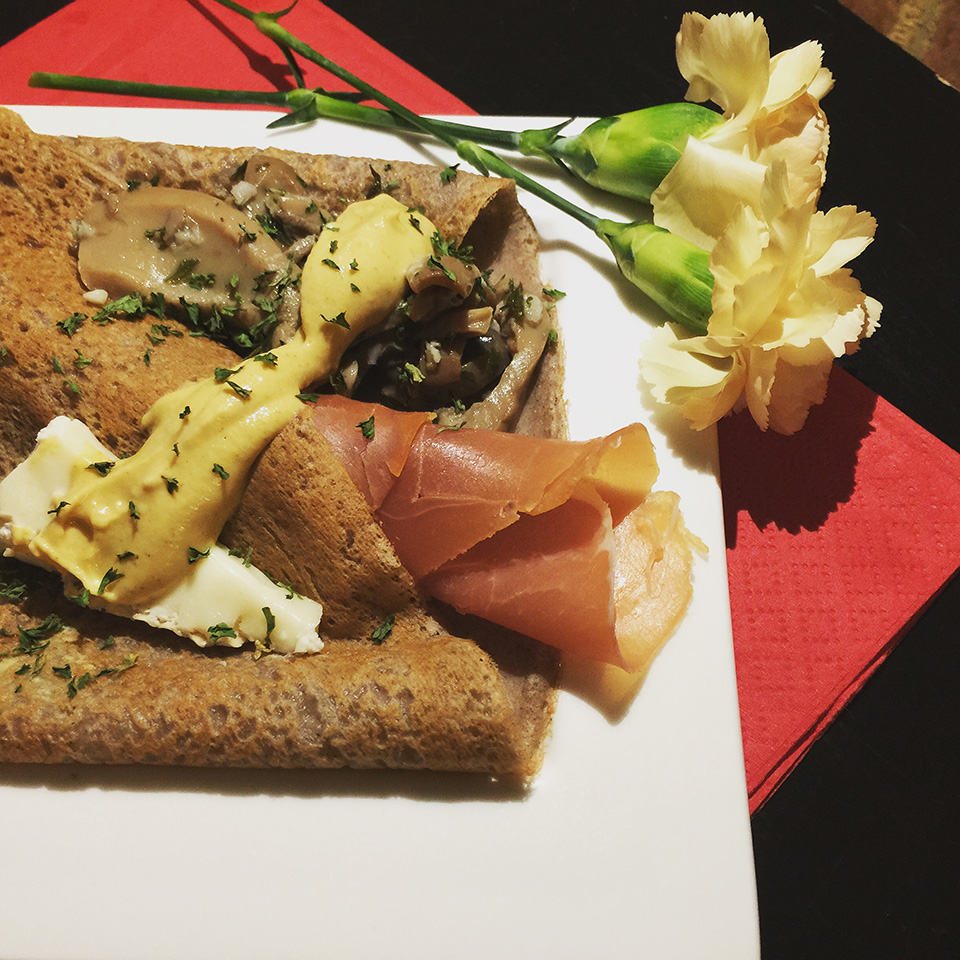 With Délice & Sarrasin, model-turned-restaurateur Cristophe Caron and his parents realized a delicious dream of running a traditional French crêperie in New York.

Délice & Sarrasin, French for "delight and buckwheat," is an apt name for this charming crêperie, which specializes in both traditional savory buckwheat galettes and sweet flour crêpes—all in a cozy West Village ambiance.

The savory galettes, which come in gluten-free, organic, and vegetarian options, range from the classic ham, egg, and cheese to more complex creations, like the scallop, kale confit, and cheese offering. The sweet crêpes combine traditional elements like chocolate and bananas with more elevated fare, such as roasted pears and orange caramel. In addition to these dessert options, Délice & Sarrasin also offers an array of traditional French pastries, including croissants, macarons, and madeleines.

From outside the restaurant, passersby peer in through the flower-laden storefront windows, enticed by the charming Parisian appearance and the smell of the crêpes. The owner himself mans the maître d'station with poise and an uniquely French flair. Délice & Sarrasin warmly welcomes its visitors with its inviting exterior into an elegant café housing a modest number of small tables. Diners  can sit either in the main dining area or at a small coffee bar off to the side, and get a glimpse of the busy kitchen as they eat

The walls are adorned with Parisian-themed paintings and family photographs. Sleek tables and bar chairs contrast with more rustic design elements, including the brick wall and fireplace. Foodies, families, and couples alike dine on heavenly crêpes in an intimate environment, while enjoying a lively French soundtrack and friendly service.

The De Savoie galette, topped with a delicate square of Brie cheese, is filled with cured ham, potatoes, crème fraîche, Gruyère, and more Brie. Served golden brown, the airy crêpe was perfectly crispy and beautifully complemented the creamier interior texture. The ham and potatoes were well-cooked and flavorful, and paired well with the lighter crème fraîche and cheese combination. Delicious and filling, this crêpe is the perfect choice for hungry patrons and cheese aficionados alike.

The Bordelaise crêpe, filled with salted caramel and roasted apples, is topped with a large scoop of vanilla ice cream and a caramel drizzle. The apples melted in the mouth and were a wonderful balance of tart and sweet. The crêpe itself was softer than the galette, but still maintained a flaky consistency. This delight is best enjoyed with a rich and creamy cappuccino.

Caron certainly accomplished his goal of opening a traditional French crêperie in New York, serving flavorful galettes and unforgettable dessert crêpes to loyal customers. Délice & Sarrasin is the perfect location for romantic meals and people-watching sessions alike. If you're still unsure about going, the chalkboard outside the restaurant asks you.