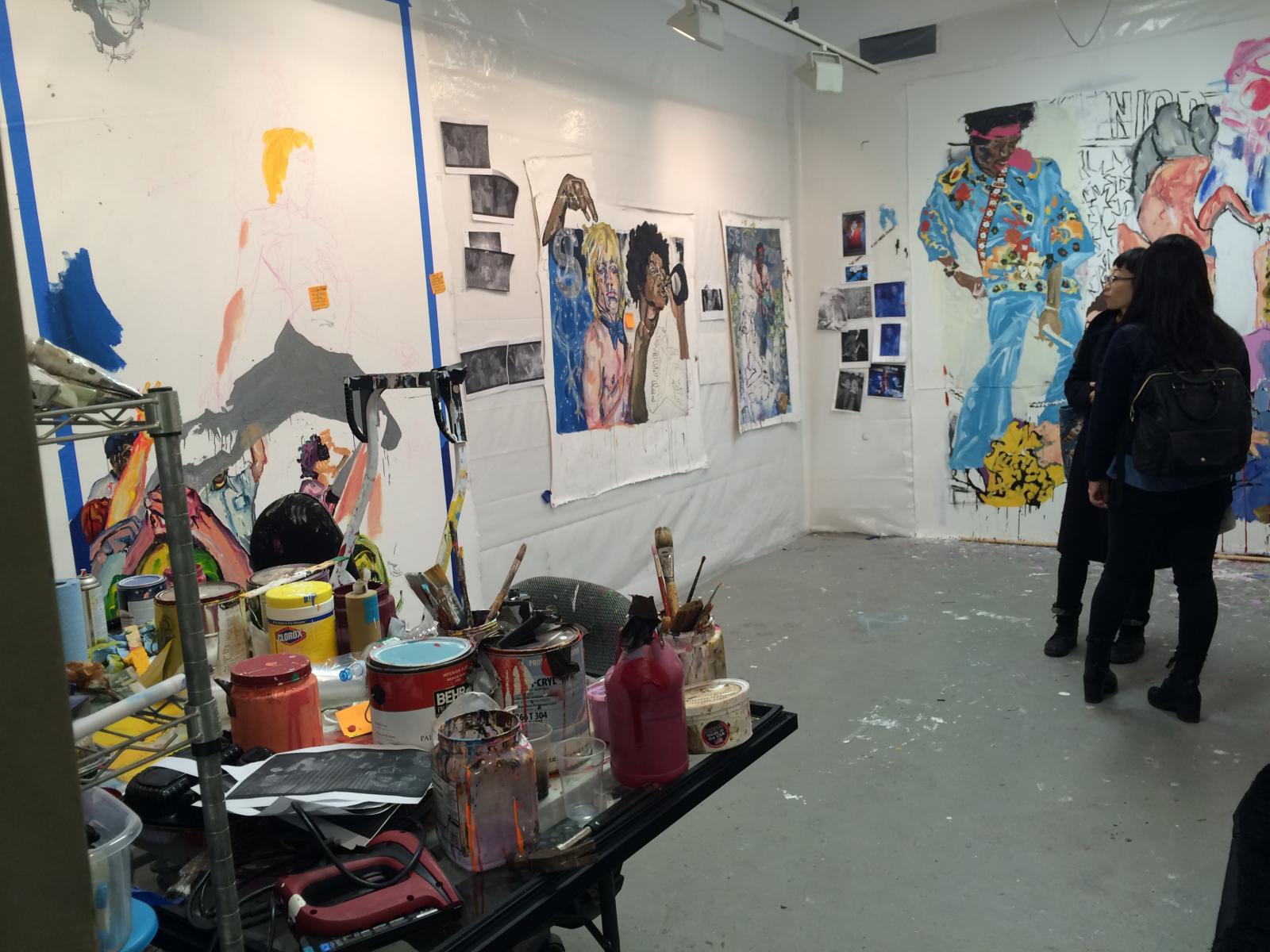 Upon entering Prentis Hall, one encounters a giant construction site. This setting reflects the in-progress nature of art in the Columbia Master of Fine Arts (MFA) program's annual Open Studios event, in which second-year students in the program open their studios to viewers.

The studios of 26 upcoming artists were not arranged in specific order, giving the viewing experience an explorative quality. Red arrows that read, "More art this way!" on the otherwise unadorned corridor led visitors into winding passageways and secret corners, where each door opened up a completely new space. Art was found in unexpected places—the crowd indulged in a scavenger hunt during which participants found more rooms and eccentric objects, such as empty bottles.

Traces of the ongoing production were everywhere. Following the sharp noise of scraping and digging, visitors stumbled into Michael Stablein Jr.'s studio to find a mound of dirt and two construction workers with motorcycle helmets leaning against the wall, with a video of their shoveling playing endlessly on the screen.

On the other side, in Lynn Spanke's working space full of unfinished paintings of Jimi Hendrix and Iggy Pop, guests peered at cryptic Post-its placed on unfinished parts of the canvas that said, for example, "chicken flying out Iggy's stomach—feathers behind him." As if the artist had just hurried out of the room, tubes of paint and old brushes were left in a pile on the table. The footprints of artists in dirt and paint delivered a sense of uncensored immediacy, a plain portrait of art in formation.

But visitors could do much more than meditate on objects and space. With a casual air enhanced by the accompaniment of finger food and beer, the event provided a chance for visitors to talk to the artists and attempt to understand their creative process. In every room, guests approached the artist to ask questions, sympathize with elements of the work, and offer different interpretations.

The conversations put the often complex artworks into context. In her display of photographs documenting the remains of the Jewish community in Lebanon, Rola Khayyat explores an intricate and sensitive cultural history, made clear by her explanation to visitors. Moving on to a collection of her grandfather's handwritten letters, Khayyat narrated the personal history involved in the piece, enabling viewers to indirectly participate in the experience.

Victoria Udondian's project features bundles of knotted fabric that hang down from the ceiling. Based on her personal experience growing up and owning a garment-producing company in Nigeria, she delivers a social commentary through the choice of material. "Second-hand clothing is what I'm really interested in," Udondian said. "They [NGOs] say they are helping poor people, but second-hand clothing get shipped over to Africa, and these have a tremendous effect on the textile and fashion industry." In turn, the different weaving techniques she uses in repurposing the fabric favors women's textile-making in Nigerian culture.

In Devra Fox's studio, paper and tires are transformed into organic forms that crawl on the walls and floor of the room. They are, in a sense, concepts given corporeal existence by the the artist. "It has a lot to do with memory and trying to recreate a physical presence," Fox said about the inspiration behind her work. "I was inspired by biology and systems of the body. That piece is inspired by digestion, how we process information," she said while pointing towards a pipe-like installation on the floor. "I was thinking about the interiors of a house, a pipe running through the house."

Each artist's personality is displayed not only by the actual works, but also by the decorative arrangements and ambiance of the rooms themselves. In his studio on the third floor, Ektor Garcia sat immersed in knitting, the meditative quality of his handcraft echoed by the finished knitwork, working tools, old furniture, photographs, and all kinds of antiques.

Farther down the hall, Rachel Stern displayed her videotaped impersonation of Medea in a room that juxtaposed luxurious objects with elements of death and mortality, like the black skull ornaments placed next to golden curtains. The symbolic expressiveness of each object rendered the entirety of the room a self-portrait. As her pamphlet "Artists Rules 2015" explains, "Put a lot of yourself into the art." At some point, it seemed almost impossible to determine where the art starts and ends.

To witness art as it is being made and the artist in live action is what MFA Open Studios offers to its visitors. While one cannot summarize the truly diverse spectrum of artists who participated in the event, they collectively left a question mark on the boundary between art and the surrounding space, between the complete and incomplete, and between artist and audience.