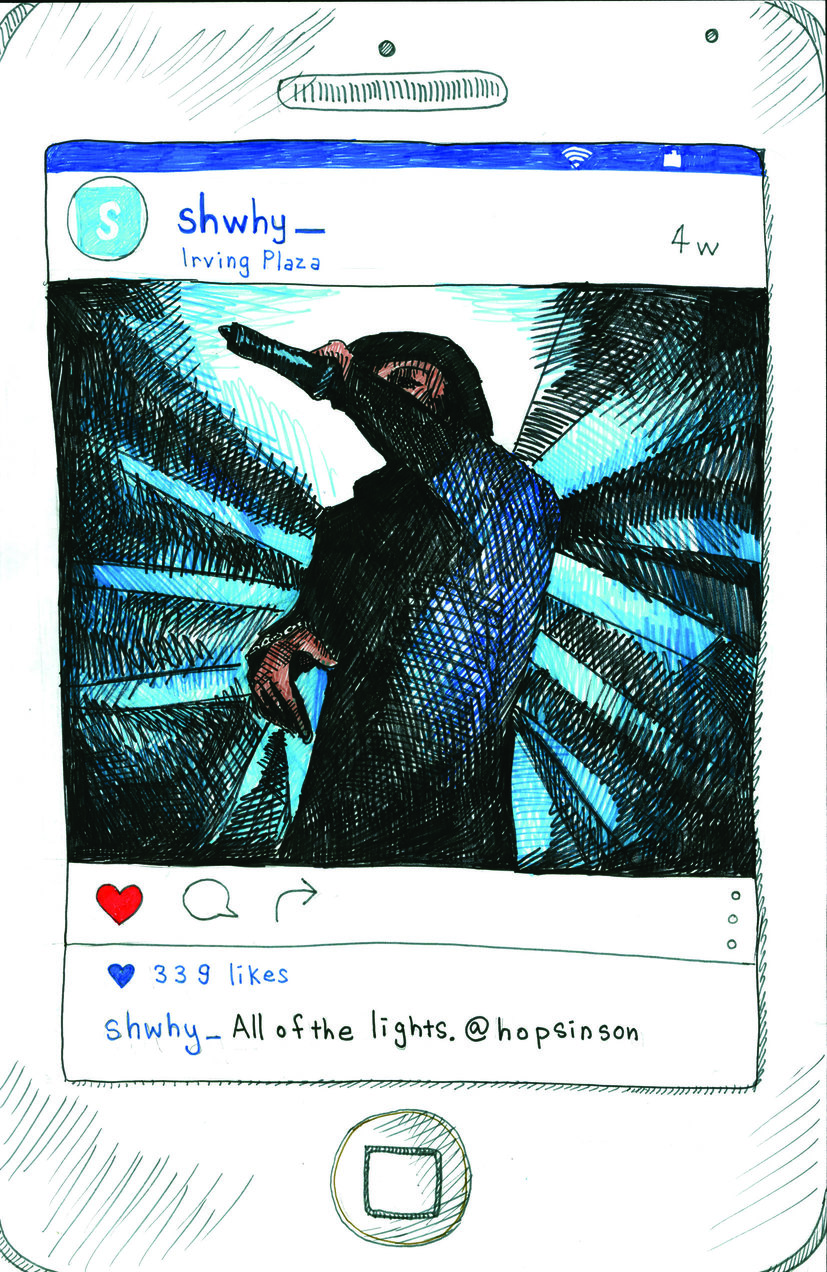 "Building an online presence in this day and age is very important," SHWHY said.

Alec Schweitzer, better known as SHWHY, is a photographer and creative in New York City who helps artists brand and market themselves through portraiture, promotional photos, and performance photos on their social media accounts.

It's no secret that the music industry has changed greatly over the years. While all musicians used to put out physical copies of albums and design the album art and liner notes for the record stores, music has now been reduced to a small file on your computer.

For up-and-coming artists in 2015, putting work online is a necessity. How else will anyone know who you are? But it's not as simple as a quick tweet with a few fire emojis—building an image takes thoughtful work and curation.

"So with my photography, I really try to showcase these artists in the coolest possible way, whether it's me planning out cool locations for shoots, or any idea I may have that I think would kind of help build their online presence through photography," SHWHY said.

SHWHY has shot shows for big-name artists like Wiz Khalifa, Logic, and Chance the Rapper. He has also worked closely with emerging artists Skizzy Mars and Lais, both of whom are part of Penthouse Music, a growing collective of new age artists.

"That got good feedback and response, so it's kind of finding new ways to showcase what we're trying to get out there and not really focus it around the artist as much, but really build imagery and content that people can connect with and enjoy," SHWHY said.

Garrett Hilliker, a graphic designer who creates cover art for Skizzy Mars and Lais, is another artist a part of Penthouse. He recently worked with Halsey—the only female voice on Justin Bieber's latest album—to design the cover for her debut album, "Badlands."

Hilliker echoed SHWHY's sentiments about the importance of visual imagery in expanding one's reach as an artist.

"If you're going to promote something, it might as well be something that's aesthetically pleasing to look at and something that catches your attention," Hilliker said. "When you scroll through these music blogs and you see all these songs and don't know what to listen to, the cover art is a huge factor in what you click on and initially give a try."

Hilliker also noted the importance of both visuals and sounds in putting out art on the Internet.

"It's a 21st-century art medium—why not combine two artists who can put a feel visually and a feel sonically with their sounds together, and see if it all works?" Hilliker said.

As artists working closely with rising musicians, SHWHY and Hilliker both stressed the importance of SoundCloud for building a fan base. To them, SoundCloud is an ideal platform for finding new music.

"I spend probably two hours a day on SoundCloud searching for new artists and stuff, and I just love listening to new stuff," SHWHY said.

"I don't use music blogs anymore. I just go on SoundCloud, so I think it's huge for having people find your tracks and having people enjoy them," Hilliker added. "I think you have an easier time trusting—if you follow people who have good music sense and taste, it kind of flows together."

Masego, a musician from Virginia who defines his sound as "Traphouse Jazz," credits SoundCloud with launching his fan base on social media and his network within the industry.

"I got on SoundCloud about a year ago, and I just kind of kept ripping people's beats and playing sax over it, but I was honest about it, and I made a series about it," Masego said. "People started to see the flattery in it, and they started sharing it, and it was a really natural way for me to get a following. And after that, I started doing some original tunes."

While Masego is actively making music, he works on numerous other projects. One project is an iPhone app called Network, a platform for artistic people to connect.

"I made Network because I wanted to have this artistic phonebook, essentially," Masego said. "It grew into this skill-bartering type of app. So there's a little bit of Craigslist in there, a little bit of Instagram and Twitter—a little bit like Tinder for the arts."

Network helps artists of all trades—from DJs to makeup artists—build relationships with others with whom they otherwise would have been unable to connect.

As the Internet allows people to build careers for themselves in new ways and online commerce takes off, many artists are designing and selling merchandise to build their fan bases.

While working with Skizzy Mars leading up to the release of "The Red Balloon Project," SHWHY designed and released three limited-edition red balloon snapbacks to promote the EP.

SHWHY is working on a similar project in preparation for Skizzy Mars' upcoming album, as well as working on launching a web store that he hopes will help artists promote themselves.

"We basically collaborate with different musicians, designers, visual artists, painters—all that type of stuff—on limited edition merchandise, so we go out and work with all these different types of creatives to create these one-offs, whether it's a hat or a sweatshirt," SHWHY said. "I'm just trying to create this online marketplace that gives these artists a new platform to be heard, if you will, through fashion."

Masego also has made T-shirts and sold them online in order to connect with his fans.

"I like that personal touch," Masego said. "I always wonder, 'What do I wish my favorite artists would do for me?' I bought some T-shirts wholesale and designed them, and I personally send them to everybody. It's relationship-based."