A millennia-old Greek classic gets a modern spin in 'Clytigation: State of Exception'

A millennia-old Greek classic gets a modern spin in 'Clytigation: State of Exception' 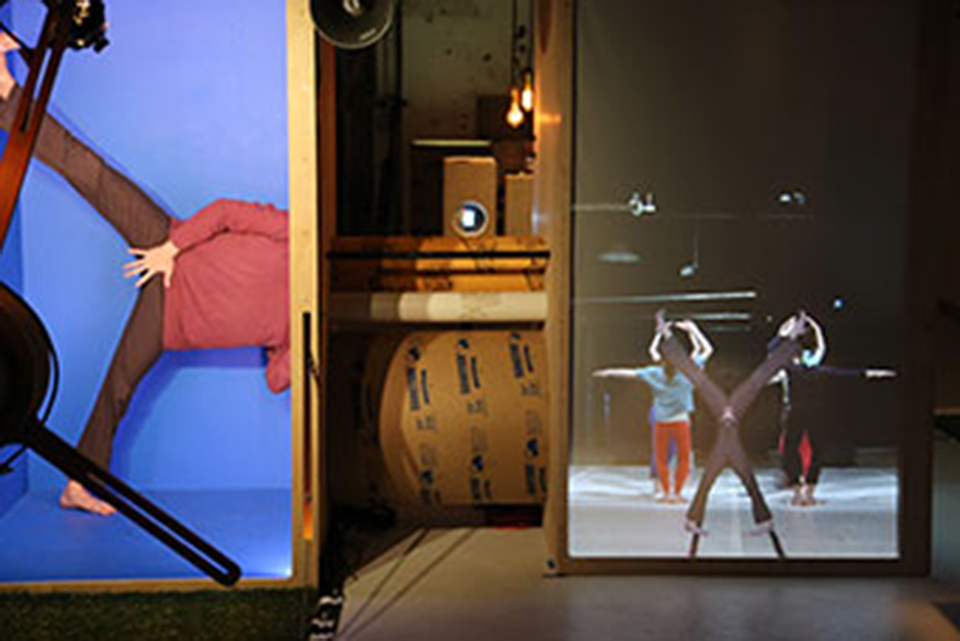 Clytemnestra achieves this through a mind-boggling labyrinth of portals and protocols, each with a unique numbering and bizarre requirements. At the center of this production by Chocolate Factory Theater is Clytemnestra's body double Jadd Tank, who is bestowed with the duty of executing her hiding protocols, such as Protocol 21 "Hiding in Dance," Protocol 81 "Hiding in Religion," and Protocol 17 "Illusion of Pleasure."

In this contemporary take on a classic myth, Ellsworth reframes the millennia-old Greek villain as a middle-aged woman driven to the point of breakdown by the near constant surveillance she faces after murdering her husband. "Clytigation" makes many references to modern symptoms of surveillance culture—the audience can readily identify allusions to Edward Snowden and the National Security Agency—that encourage complicit chuckles from the audience.

The audience is invited into Clytemnestra's manic world through feats of gadgetry: a coin-operated choreography generator with a mobile-ready website, a typewriter to livestream audience comments, and even a crying machine to outsource your catharsis.

Not to be outdone, Tank's live performance from within a wooden box lined with blue fabric blazes just as brightly. Through blue screen processing by Max Bernstein, Tank navigates a rapid-fire array of scenes that showcase his versatility as a dancer. Tank, at one moment entrapped in a Mario game, skillfully jumps into frappés and pirouettes, and then transitions to humping the wall in an aquarium.

Although its titular character is borrowed from Greek tragedy, this performance is pleasantly light on references to Greek drama. And while the performance does tip its hat to scenes from "The Oresteia," such as Clytemnestra's dream sequence in which she breastfeeds a snake, Ellsworth assumes no prior knowledge of Greek tragedy.

Throughout the show, an operator—Ellsworth's sister Ann Ellsworth—stands by to answer any questions on the show phoned in by the audience via an on-location telephone in a considerate gesture to those unfamiliar with the story.

The power of "Clytigation" lies in its ability to distill the themes underlying the ancient Greek work rather than belaboring text and semantics. In the prologue, Clytemnestra promises that she will "stay as true to the original vision." In this regard, the work delivers.

In the original dramatic trilogy, "philos-aphilos" (Greek for "love-in-hate") suggests that the act of murder is always directed at one's own body. Ellsworth takes this literally through the physical ordeals to which she subjects her body double, Tank.

Tank takes feedback from Clytemnestra: He wears a shock collar endured with visible distress, is suspended by the ankles, and puts on socks while balancing on one foot. The sadistic nature of Clytemnestra's protocol also adds a darker layer to Ellsworth's interpretation of Clytemnestra, going beyond the frazzled woman.

It is not easy to make a Greek play centered on bloody spousal murder digestible to modern audiences, but "Clytigation" did exactly what one of Clytemnestra's elaborate protocols prescribed. By "Hiding in Art" the darker themes of vulnerability and manipulation, Ellsworth renders the drama meaningful to all.