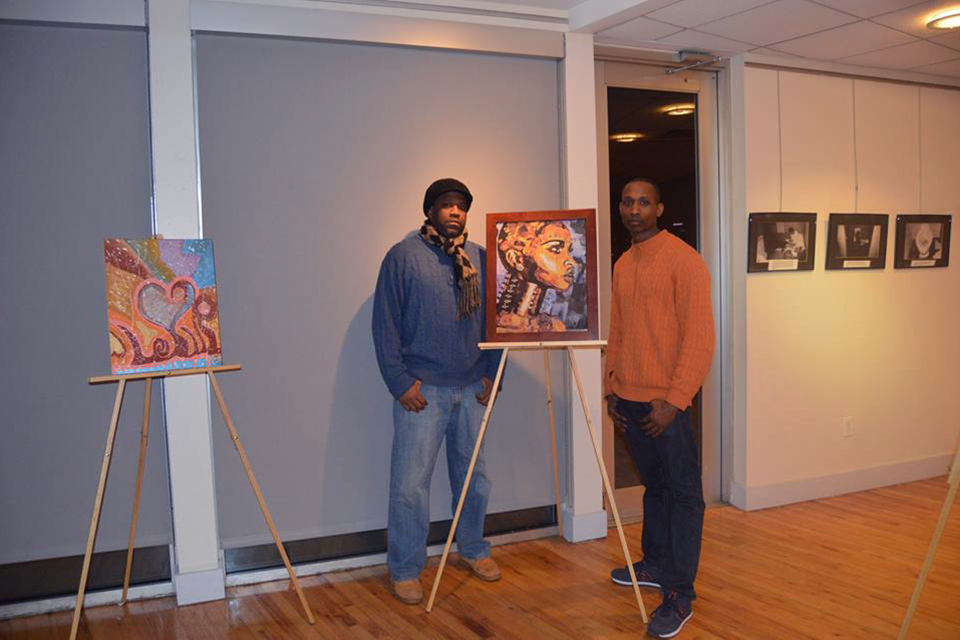 Lorenzo Steele Jr. and Isaac Scott are the curators of "Through Different Eyes," an exhibit that hopes to engage viewers with the issue of mass incarceration.

A new exhibit at Rio II Gallery opening Friday aims to give both Columbia students and local residents a new way to engage with the issue of mass incarceration.

"Through Different Eyes: A Community Impacted" is a collaboration in honor of Black History Month between Rio II Gallery and the Center for Justice at Columbia University, an interdisciplinary initiative focused on criminal justice reform. The gallery, which is free and open to the public, is located in the seventh-floor penthouse at Riverside Drive and 135th Street.

Described as "an artistic response to mass incarceration," the exhibit features 32 pieces that represent the various perspectives of seven artists connected to the criminal justice system. The artists all have underlying connections to Rikers Island and include those who were formerly incarcerated at Rikers, relatives of current and former inmates, and a former Rikers corrections officer.

Contributing artists Isaac Scott, the arts and communications specialist for the Center for Justice and a former Rikers Island inmate, and Lorenzo Steele Jr., a former Rikers corrections officer, curated the exhibit.

Upon his release from Rikers, Scott turned to volunteer work at the Center while working nights at a bakery. Volunteering at the Center ultimately proved fruitful—in addition to being hired as their arts and communications specialist, Scott was selected as a scholar for the test cohort of the center's Justice-in-Education Initiative, a collaboration with the Heyman Center for Humanities that offers credited Columbia courses to the currently and formerly incarcerated.

Scott and Steele hope that the exhibit, by providing a platform for those directly impacted by the criminal justice system, will attract students. Scott noted students might not be used to encountering the theme of mass incarceration in an engaging way, though prison reform has been championed by student activists in the past year—Columbia became the first U.S. university to divest from the private prison industry last June.

The range of perspectives included in the show results in an eclectic mix of pieces.

Scott's multimedia works are the result of his search for a creative outlet and means of expressing himself to his family, while still serving his nine-year sentence. Among the most striking is "Solitary," a piece depicting a headless black man in solitary confinement, chains dangling from his bandaged hands, and tick marks on the wall to mark the days. Scott made the piece during his own time in solitary confinement.

Scott's sister, Tahmineh Zanders, is also a featured artist with a family connection to Rikers. Her paintings "Growth" and "Strength," which depict a human heart surrounded by vines and a serene black woman, respectively, are powerful reminders of the perspectives often left out of the discussion of mass incarceration in the United States.

While pieces like Scott's and Zanders' present more interpretive and emotional commentary, Steele aims to educate through his art, resulting in bleaker, cautionary images.

Standing apart from this collaboration are Steele's most graphic photographs, which forgo titles in favor of sobering captions describing "innocent inmates" who never made it home. A particularly jarring group of photos, which greets viewers upon entrance, shows young male inmates with severe gashes on their faces from razor attacks.

Steele—who despite practicing photography since childhood has only begun to consider himself an artist in the past couple of years—used his photographs in presentations at Rikers in an effort to change behavior he found troubling.

"[Raising awareness about mass incarceration] is a trend for some people. I've been advocating since I was in uniform," he said.

Since leaving Rikers, Steele has continued his fight to educate young people about the criminal justice system, which he describes as a business that commodifies inmates upon incarceration.

Steele summarizes his efforts in a single piece of advice to black and Hispanic youth in particular: "Do everything in your power to avoid the criminal justice system."

This mix of expressive and cautionary art appealed to Rio II Gallery Director Ana-Ofelia Rodriguez, who was particularly impressed with Scott's and the Center for Justice's merging of academia and community organizing.

Rodriguez, who founded the first Rio Gallery in the Broadway Housing Communities apartment building in 1997 as a way to engage residents and use community space more productively, said the exhibit was appropriate for Black History Month since mass incarceration and how it affects black Americans in particular is such a "hot topic."

In the end, the show's appeal lies in its ability to capture firsthand accounts of the issue of mass incarceration.

"There are a lot of different perspectives that need to be spoken about," Scott said. "That mother needs to let you know what it was like when her son was gone, and if the only way she can tell you is through her art, then so be it."

"Through Different Eyes: A Community Impacted" runs Friday, Feb. 19 through Monday Feb. 29 at Rio II Gallery. The opening reception is from 5 to 9 p.m.