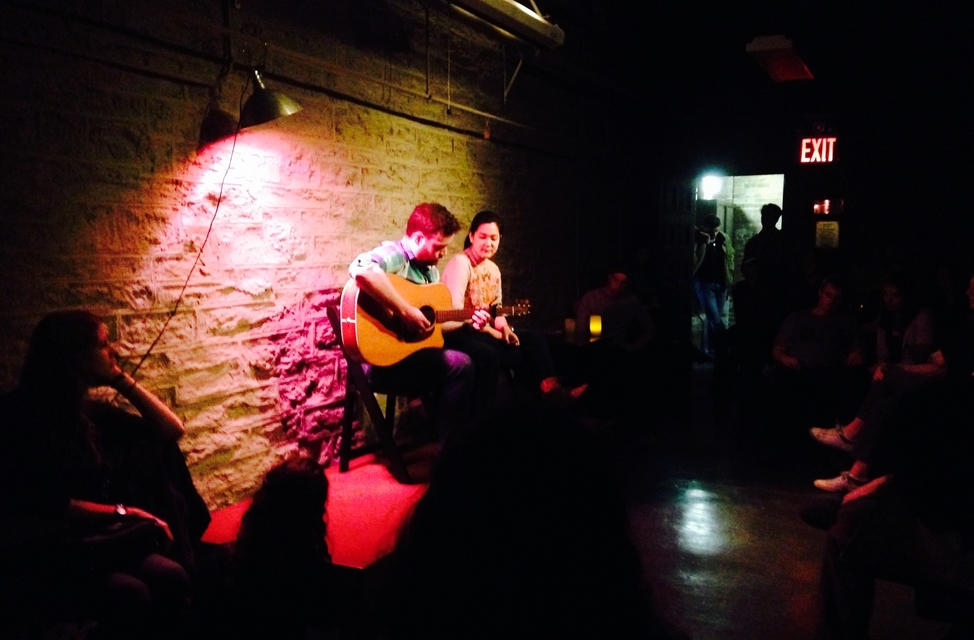 If you're a student at Columbia, it's almost guaranteed you've walked past St. Paul's Chapel at least a few times. The building is a campus landmark, distinct for its stained glass and the occasional wedding clogging up College Walk. But not many students know what happens inside—or rather, underneath—the church's floor.

Postcrypt Coffeehouse, located in the basement of the chapel, is a dim, cozy space full of small wooden tables. Every Friday and Saturday night it comes to life with professional, amateur, and student musicians performing all varieties of acoustic music. After the opening weekend of the semester, Arts & Entertainment reporter Sophie Kossakowski, BC '19, sat down with booking manager Angela Kay Xie, CC '18, to discuss the history of the venue and what it has in store for patrons in the upcoming semester.

Postcrypt Coffeehouse first opened in 1964, in the same space it occupies today.

The coffeehouse certainly resembles any number of small downtown venues—its size limits capacity to 30 people, and its natural acoustics and tiny stage make every performance intimate. The venue's name originated from a Søren Kierkegaard book, "Concluding Unscientific Postscript to Philosophical Fragments," but was shortened to "Postcrypt" as a pun on the location underneath the chapel.

"We've been in that space since the start, and I think that we're going try to stay there for as long as possible. There's no one else that wants in—the space is definitely identified with Postcrypt as a group now," Xie said.

Though the venue and the purpose have remained the same, Postcrypt has evolved over its 62-year life.

"I think it's gotten more popular, especially on social media. People can take recordings, and they're eager to share what's going on," Xie said.

The rise of Facebook's popularity among college students has also boosted Postcrypt's audience numbers—more people than ever are eager to visit the venue after seeing the event online.

"Musically, it's always kind of been changing, because it's completely student-run," Xie said. "Student input about student musicians and which artists to invite is constantly changing. We bring different kinds of artists every year depending on the tastes of the booking manager and the students, and we try to react and work together with the audience."

The vibe has certainly changed since the '90s, when Postcrypt contained a fully-stocked bar instead of a coffee-and-tea counter. When the venue could still serve alcohol, Xie said patrons were a little more rowdy, as opposed to the relaxed atmosphere in place today. The venue has also booked some big names in music over the years, among them Jeff Buckley, Ani DiFranco, David Bromberg, and Barnard alumna Suzanne Vega.

Now, Xie usually finds artists to book through a combination of music-sharing websites, such as SoundCloud and Bandcamp or by word of mouth.

"We have a list of who played here before, and sometimes they're still available, and they'll reach out to us, or if we really liked them, we'll reach out to them. Otherwise, it's kind of free-form. I'll surf Bandcamp and SoundCloud for artists in New York, I'll go to shows around the city, I'll see what's convenient for artists," Xie said.

It can sometimes be difficult for her to find artists willing to play a space as small as the coffeehouse.

"It's hard to strike a balance of [finding] someone who has time to come but is also performing in a small venue without a real amplification system," Xie said. "We can't really get the people who want a lot of attention anymore because our venue can only hold 30 people, and we can't offer the same payment as a big promoter might."

Despite these limitations, Postcrypt continues to find a variety of unique artists to perform—and they'll continue to do so this semester.

"One of my goals this year while booking artists was to try and expand on our diversity of sound," Xie said. In the past, the venue's acoustics and size have limited the genre of musicians to mostly folk and americana music—"lots of harmonica, bluegrass, fiddle, those kinds of instruments"—but Xie has gone outside the box with many of the acts scheduled to play in the upcoming months.

Postcrypt's opening weekend included acts such as Baharat Band, which Xie describes as a "Middle Eastern fusion band led by an instrument called an oud." Xie has also tried to even out the gender ratio of performers, booking more female musicians than previous years. Later performances in the semester will continue to promote diversity, including Connecticut-based folk singer Kath Bloom.

"I'm really excited for her to come, because I thought it would never happen," Xie said. "She's had a really long career, and she's worked with a lot of avant-garde musicians."

Postcrypt also encourages student performers in the community to become more active. Among their normal shows, Postcrypt hosts an open mic night on the first Saturday of each month, and show lineups include a few student musicians as well as two comedy nights hosted by campus comedy troupes. Sticking true to her goal of expanding variety, Xie has created a diverse selection of events for the semester. But that's not to say Postcrypt has completely changed. Its purpose remains the same as it was in 1964, when the doors first opened: to bring students together in the name of music.