Expanding opportunity in a predestined world: KCST's Rosencrantz and Guildenstern Are Dead

Expanding opportunity in a predestined world: KCST's Rosencrantz and Guildenstern Are Dead 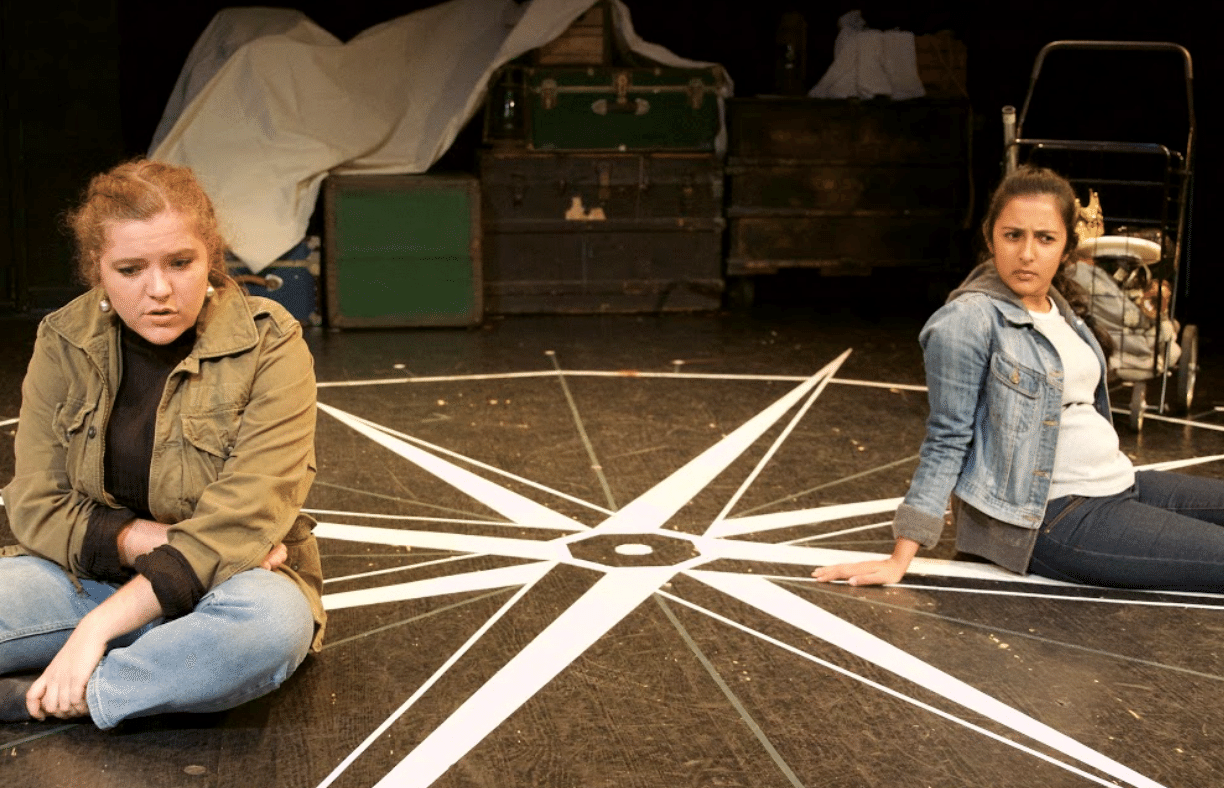 Two girls kneel in the middle of the round stage as the audience files in around them and settles down into their seats. They're Rosencrantz and Guildenstern, already in character, flipping a coin between them.

"To have them choose to enter, to see them walk on, would almost make them complicit in what's happening to them," director Sylvia Korman, BC '18, said.  King's Crown Shakespeare Troupe's first production of the semester, Tom Stoppard's "Rosencrantz and Guildenstern Are Dead," ran from Oct. 13 to Oct. 16 in the Lerner Black Box Theatre.

"Hamlet" has been told over and over again, in a myriad of ways. Stoppard's most iconic play takes on the story from the point of view of two minor characters, Rosencrantz and Guildenstern, who are ultimately just pawns in the larger universe of Hamlet's world. These two clever but often confounded characters are not the masters of their own fates

"We're forced to sort of admit that we [as an audience] are not Hamlet—we're Rosencrantz and Guildenstern. We have no control," Korman said. A giant compass painted over the floor of the stage symbolized direction and cleverly contrasted with the protagonists who were often losing their way. Rosencrantz and Guildenstern were unable to see both where the compass was pointing and where the plot was taking them.

Audience members were immersed into the world of Rosencrantz and Guildenstern through colorful characters and crafty lighting. The set was minimal, bare even, but the actors made the space feel full with the commitment they brought to their quirky roles. Jet Harper, BC '19, brought humor and life to Hamlet, a character often portrayed as brooding and dark. Harper's humorous interjections throughout the work were well balanced by the sternly contemplative Guildenstern, played by Karinya Ghiara, CC '19. Rose Meriam, CC '19, brought to the production a Rosencrantz who was able to remain likable amidst various blunders. The blend of diverse, complementary characters brought humanity and variety to a play that centers on words. The tragedians—a band of traveling players led by a particularly engaging Carolyn Kegel, CC '17, whose energy highlighted her character's existential insights—provided interludes of physical humor that kept the audience laughing as well as listening to the witty banter of the play.

The fates of the protagonists may have been predestined, but Korman had free will when it came to the casting choices. They chose to make Rosencrantz and Guildenstern female, attributing their decision to three major factors. Besides the fact that more women act on this campus than men do, they also wanted to make more compelling roles available to female actors working within the Shakespearean catalog. According to Korman, changing the gender of the protagonists does not change the play in any fundamental way. The narrative at no point focuses on nor is reliant upon the characters' gender. They changed Rosencrantz and Guildenstern's pronouns to match the female actresses portraying them but believes it would not have changed the production in any way if they hadn't.

Korman also decided to change the gender of her protagonists allowed their experience to resonate most with women. The frequency with which women are portrayed as minor characters echoes the way in which Rosencrantz and Guildenstern are frequently pushed aside.

"This play is so much about characters who are sidelined by main narratives and what that does to them. I think that is so much more poignant if you're a woman," they said.

Their adjustments to the script seemed to align perfectly with what they believe to be the spirit of Stoppard himself. In regards to what they hoped the takeaway would be for their audience they said, "I really hope the audience leaves imbued with that Stoppard spirit of 'Words are my playthings,' and just because something seems like it's untouchable like Hamlet, doesn't mean I can't rip a chunk off and play with it."