Studio Talks: Jouen Aatchim and the poetics of installation

Studio Talks: Jouen Aatchim and the poetics of installation 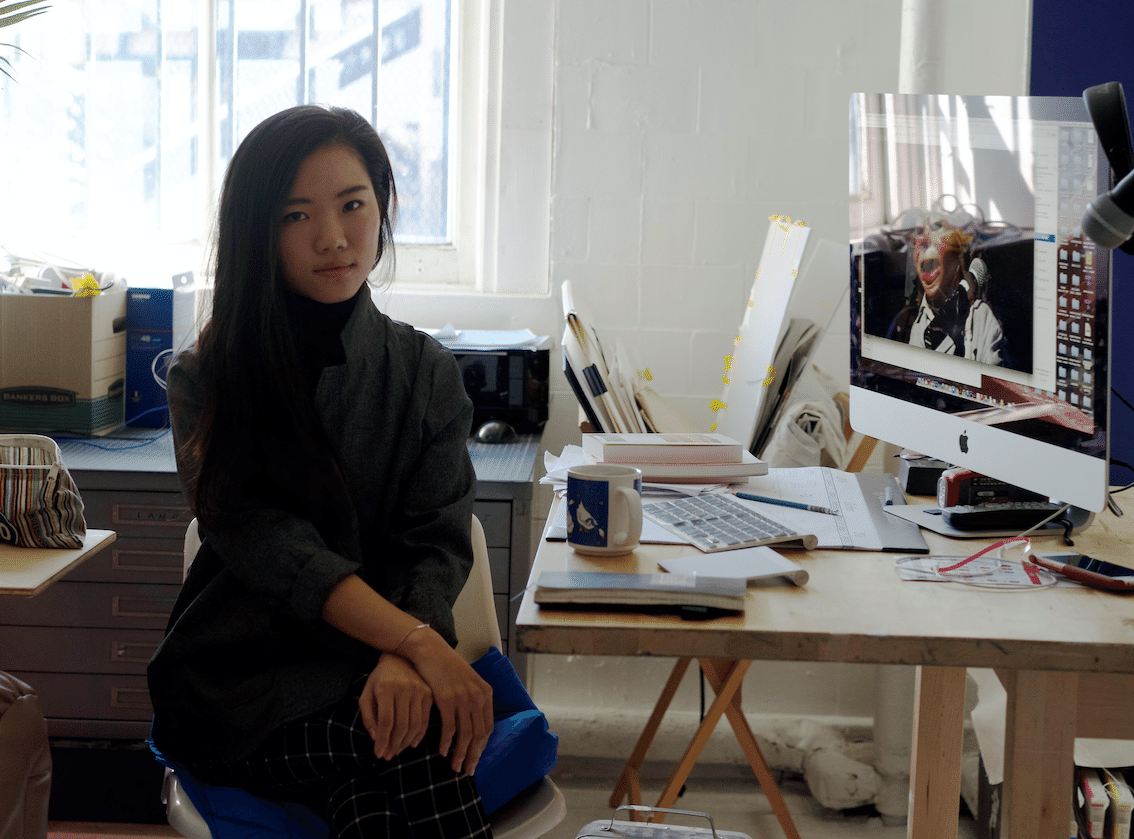 This article is a part of the series Studio Talks, where MFA students are interviewed about their creative process while studying at Columbia.

Jouen Aatchim's art studio is an installation in and of itself. The first thing I see as I enter is the giant mosaic piece sprawled across the linoleum floor. A fisherman reeling his line is printed upon what seems to be an email template, titled Sans Self. Surrounding the mosaic are written drafts and colorful drawings bifurcating the corners of the blank wall. Across, there are all sorts of miscellaneous items: a standing microphone, hanging geraniums, and a pink lighting fixture projecting onto the installation. 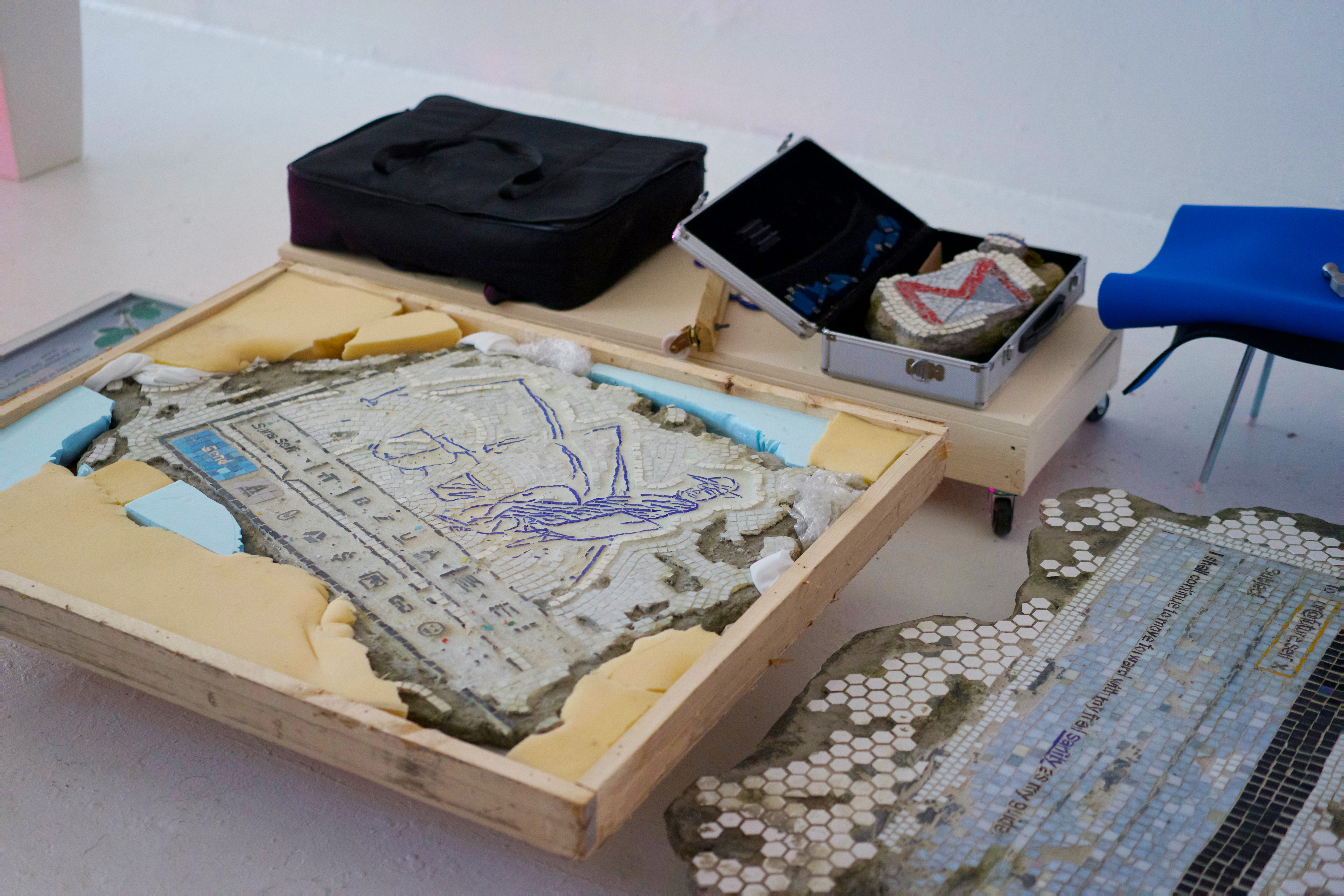 I seat myself next to Jouen, a 2017 MFA candidate at Columbia, who settles into a spinning white acrylic chair. She fires up her computer and proceeds to show me slides of her current projects.

Could you tell me about the mosaic piece in your studio?

This one is called Sans Self. The font is in Sans Serif. The whole project started last year when I was in residency in Lithuania. I was thinking of Robert Musil. He wrote the essay Fishermen on the Baltic. He really died poorly… He's an unlucky man, and I was thinking of the guy and trying to make a monument for him. In the beginning, I was going to make a biography of a fictional fisherman, the fishing as a metaphor for writing. He uses this term, "essays," in his work, which was adapted in my formal installation, so there is no linear narrative. I just display it as it is.

How did you choose the specific materials for your work?

I work with a lot of different materials. The mosaics started because I have this little piece that I found in Coney Island somewhere. I was thinking that I wanted to make a piece like that for my draft, an email draft in a similar form. This one is part of my video work that I showed in the Jewish museum, and I made it into a mosaic piece. People were asking me if I found it in a subway station (laughs).

What inspires you to multiply images?

Because I have a background in printmaking, I like the idea of multiplying images and their relationships and the ownership of those images. When I was installing this piece, I put these little wires. I was making metaphors. Those are earthworms. I placed them where I wanted people to take photos, so, in a way, I was fishing, luring my audience to take a photo of certain places. I multiply images not on my own, but I make other people take photos. They do not know that they were multiplying my images for me.

What prompted your interest in voice as an art form?

I've worked with voice actors and a ventriloquist, so I'm into proxy relationships. I was thinking of learning more about the theory behind the voice, gender-wise. Ventriloquism [has a male conception]—the priest, talking to the god. Later, [men employing women's voices] used ventriloquism to make sarcastic jokes about politics. I didn't like that idea, so I found a really fierce [female] ventriloquist.

Which exhibitions have you been featured in lately, and what did you show?

I did an installation and a performance disguised as an artist talk. I had a summer show at Columbia, and the other one was at Doosan Gallery in Chelsea—it's like a non-profit space for Korean contemporary art. [Doosan] never had the chance to work with young artists [in New York], only people from Korea. The curator wanted to break [barriers] for emerging artists here.

What are challenges you face installing an exhibition?

I have to be in the space. I have to be there and install [my works]. [I need to] feel my instincts and decide [...] if I should put the works chronologically. Those decisions are challenging, but they're also quite fun.

Do you have any advice for artists working with gallery owners and curators?

You need to reply to emails quickly and request what you need. Even though [the galleries and curators] have an idea for how they want to manifest your show, you're the artist. No matter how young you are or how inexperienced, you can decide what you need.

Jouen Aatchim will be featured at a new exhibition in Beijing this winter.