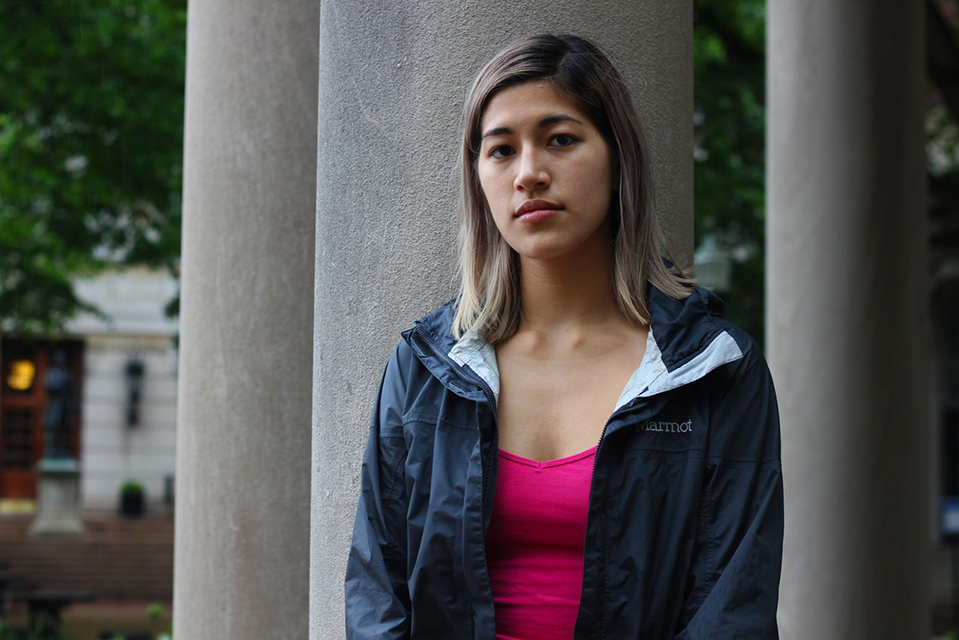 A few steps from the Clinton-Washington Aves C train stop in Clinton Hill, Brooklyn (a.k.a. Pratt Territory) is an empty brick storefront, unassuming—and almost creepy.  The name "JACK" is lit up on a wooden sign over the door, the only indicator that this is the place: It's JACK Performance Space, an iconic underground nook where up-and-coming artists like Emma Sulkowicz, CC '15, are making waves in the art world.

Since graduating a year and a half ago, Sulkowicz has been pursuing studio art training at the Whitney Museum of American Art's Independent Study Program—but she's also had success as an independent artist. Earlier this year, her performance piece "Self-Portrait" at Coagula Curatorial in Los Angeles — where "Emmatron," a life-sized replica of the artist, answered visitors' questions about "Carry That Weight," Sulkowicz's highly-publicized mattress piece at Columbia—was met with critical acclaim.  Like "Carry That Weight," "Self-Portrait" gave the artist's perspective on life after trauma—but also included an innovative critique of the media's sensationalization of this trauma.

Now back on the East Coast, Sulkowicz's pursuits have led her to Brooklyn, where she, her production crew, and a DJ enlivened JACK for three consecutive evenings last weekend, presenting Sulkowicz's brand-new piece entitled "I.D."  The performance space and its tin foil-covered walls, reminiscent of a refrigerator's inside, have made the rounds of Internet notoriety. Sulkowicz admits that the space inspired her from the first time she saw it, and she conceptualized her exhibit to flow within its unique atmosphere.

The trendy location was conducive to Sulkowicz's concept for I.D.: Guests gathered to dance, mingle, and sip beers in the dimly festive light, waiting for their turn to speak with Sulkowicz, who had guaranteed a short, private conversation with each visitor. The atmosphere was that of a laid-back party, with only one rule: no pictures or videos. Guests were instead encouraged to experience the event unfettered, socialize, and reflect on ephemeral impressions.

The concept of I.D. is a far departure from Sulkowicz's controversial mattress piece. Instead of a solo performance, I.D. incorporates both executant and audience in a live interaction where their curated identities are reflected—whether hidden or shared. Sulkowicz likens “identity,” or “I.D.” in short, to both the representation of our “fantasy selves” and the psyche's metaphorical armor we use to protect ourselves against how we truly feel. The performance challenged these defense mechanismsas Sulkowicz said, “identities are temporary, and every party ends.”

At the end of every private talk, Sulkowicz handed each guest a neon-green wristband and a black Sharpie pen, and asked them to jot down an impression—or, rather, a meta-impression: What did each guest believe Sulkowicz thought of them following their brief chat? Sulkowicz did the same with regards to each attendee, donning her own wristband for each of the 30 or 40 conversations that she had throughout the night, until her arm was enveloped in Sharpie-scribbled paper strips.

Suspense lay latent as Sulkowicz made her rounds. Guests kept each other company and collectively wondered: what else—what "big reveal"—did the artist have in store tonight?

Discussion abounded of Sulkowicz's friendly demeanor and bright potential—and some of Sulkowicz's friends in attendance provided insight on her devotion to her craft and personal courage. One acquaintance lamented how people tended (especially since "Carry That Weight's" intense publicization) to pigeonhole Sulkowicz as "Mattress Girl," despite her notable accomplishments after graduation.

Suddenly, a spotlight flickered to life, and Sulkowicz's crew began assembling rows of spectator chairs.  Their anticipation for her big reveal at its peak, guests seated themselves as crew members passed out loose leaf paper and writing utensils, encouraging each guest to record an impression of the speech Sulkowicz was about to give.

Taking to the spotlight for a final few words, Sulkowicz asked audience members to name what they had written on their "impression" wristbands. One audience member shouted out, "smells like an asshole," which was met by unfeigned laughter from both Sulkowicz and the crowd. He explained later that Sulkowicz had told him that her ex-boyfriend wore the same cologne that he was wearing.

Sulkowicz proceeded with her rehearsed speech, touching on French psychoanalyst Jacques Lacan's concept of identity as armor and novelist Justin Torres' theory of political unity to argue her point on self-selected identity. The sleeve of green wristbands on her arm evoked the multiple identities that she had assumed throughout the night, changing from mask to mask as she floated about the party guests.  As she spoke on these themes, it was hard not to see the inherent connection between the space itself and Sulkowicz's thoughts: The metallic walls evoked Lacan's armor metaphor, and the relaxed ambiance incited a sense of self-awareness and meditative reflection.

I.D. allowed Sulkowicz to step back, as an artist, from the spotlight, and encourage others to actively participate in her art. It was a testament to the power of impressions, the unique first-time encounters we share with one another. An interactive experience as much as an artistic performance, I.D. addresses the vulnerability that resides in all of us and asks, instead, that we embrace our entire individual identities, as this is what, in Sulkowicz's words, "pushes us to stop hoping for sameness and start hoping for change."