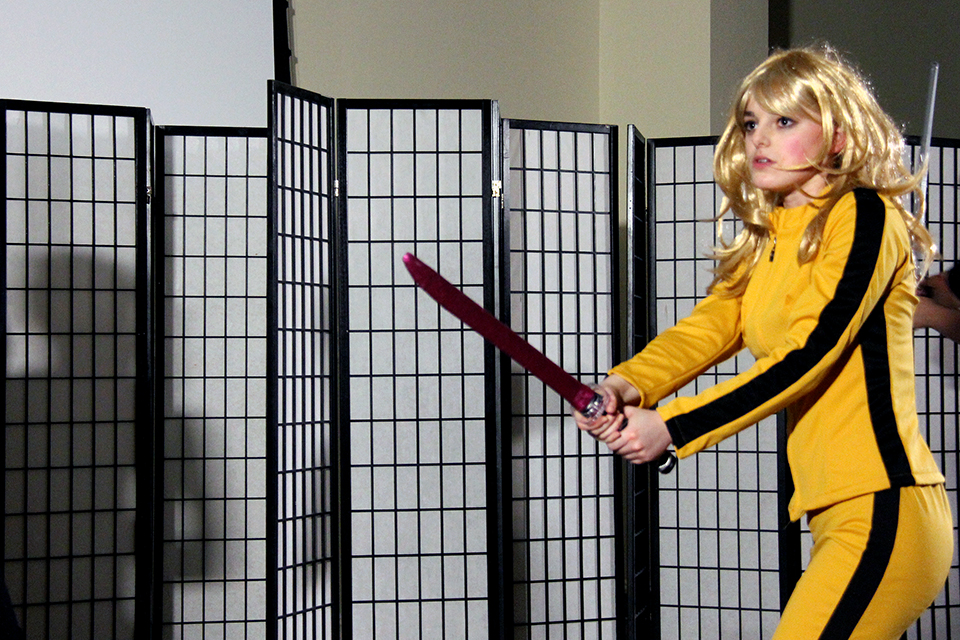 Just as producer Maddy Cohen, BC '19, begins asking the audience to turn off their phones, a loud, high-pitched ringtone interrupts the end of her sentence. Cohen's face scrunches in annoyance at what first seems like the well-timed blunder of a careless audience member—that is, until the offending member is dragged onstage and violently punished for her carelessness. Cohen vigorously plunges a sword into her "chest" (or left armpit, the one facing the audience, as it so happens). The audience member screams and takes an exaggerated fall.

This initial armpit-stabbing was a good indicator of the farcical nature of violence in NOMADS' “Ooh Kill 'Em: A Musical Parody.” The Quentin Tarantino “Kill Bill” spoof, written by Nick Hermesman, CC '19, premiered in Barnard Hall's James Room on Nov. 19.

The production stayed true to the original film, featuring gore in equal measure. The show, however, added its own wacky twist to the blood motif by personifying it, turning it into a cast member wearing a T-shirt with the word “blood” written on it who ran across the stage covering murder victims in a red sheet. Other representations of blood included red felt pinned to the clothes of gunshot victims and strips of red fabric. The only realistic representation came as a shock at the end of the production, when a spurt of fake blood emerged abruptly from the center of Bill's chest.

Bill's comparatively realistic demise ended the show on a satisfying note—our villain was finally vanquished. It was an ending that the director, Isaac Jiffar, CC '18, had intended to be gratifyingly conclusive.

“Where this play really shines, I think, is where it contrasts the comical with the serious. Bill's death, it's what [The Bride has] been pursuing the whole time. I felt like having real fake blood there would add to the feeling of catharsis and a satisfying resolution that we got there rather than laughing it off,” Jiffar said.

Actors not only portrayed blood but warped their bodies into chairs, doors, and, notably, a clogged toilet in a strip club. The audience roared with laughter as a plunger was thrust between a squatting crew member's outstretched arms. The production also featured a few kitschy props such as light-up swords and decapitated styrofoam heads. Chairs were set up in rows in the James Room, facing a strip of space in the front of the stage area. Screens were positioned to create a backstage area, and the pit orchestra sat beside the audience. This staging had a con though, as neither the performance area nor the seats were raised, thus blocking the audience's view with the people in front of them.

The combat scenes were surprisingly realistic for the farcical nature of “Ooh Kill 'Em.” The production also featured several simple dance numbers, choreographed by Carina Goebelbecker BC '18, but these were often out of sync when performed by the cast. The songs were clever and catchy though, especially “Strong Female Character,” sung by The Bride. The upbeat tune featured lines such as, “I bet you're all meninists” and “My vagina is a temple,” which garnered laughs from the audience.

Maggie Vlietstra, BC '20, helped ground the absurd play by creating a relatable character in The Bride. She took her role past a silly spoof by offering emotional depth and a variety of subtle, yet comical facial expressions that represented her character's frustrations with the storyline. Cast members occasionally broke character by smiling or laughing at particularly humorous moments whose comedic value would have been increased had they stayed committed to the gag. However, given the nature of the show as a parody, these mistakes felt in line with the production, and the jokes were still able to land.

“Ooh Kill 'Em” had its flaws but was overall a fun experience of a show. The modern day references to Snapchat and “Game of Thrones” kept it fresh, and the dialogue was witty. The funniest moment was a commentary on all the shots of feet in Tarantino's films in which Tarantino himself, played by Arielle Firestone, GS/JTS '18, came onstage to veraciously own up to his foot fetish in front of a lengthy close-up video of The Bride's feet and a chorus line of cast members singing “Wiggle Your Big Toe.” Never before has staring extensively at someone's toes been so entertaining.