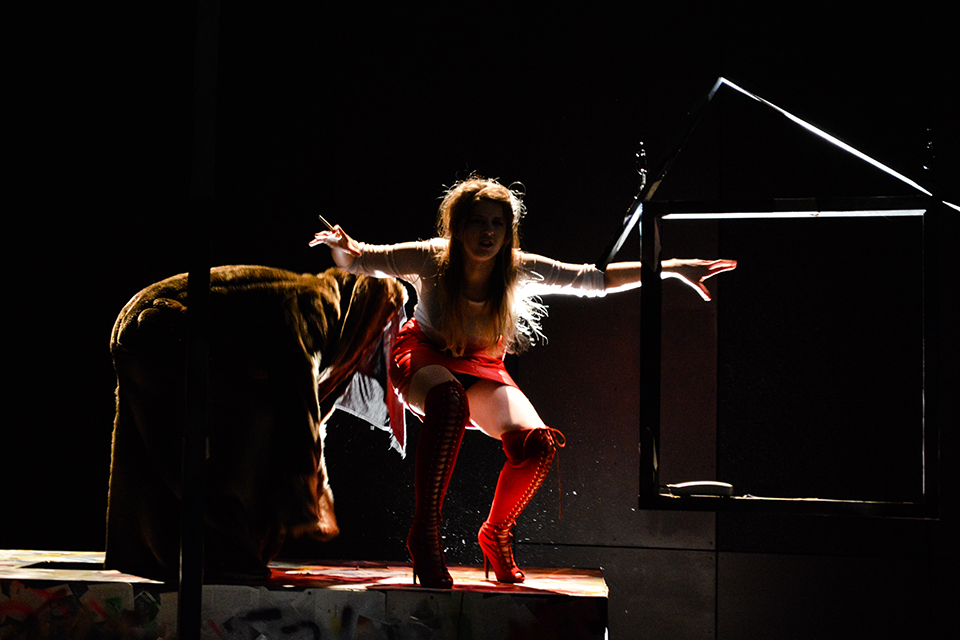 “This show is going to be heavily rooted in magic and resistance.”

Directors Rachel Cramer, BC ’17, and Alana Herrnson, BC ’19, used these words to introduce CU Players’ adaptation of “The Fairytale Lives of Russian Girls,” which took place over the weekend at Barnard’s Glicker-Milstein Theatre. Written by Meg Miroshnik, “Fairytale Lives” depicts a world through the lenses of women, where danger lies in straying from the familiar path and happiness is a prize to be fought for.

Steeped in magical realism, the play at times bordered on the incredulous. But despite the chaotic, strange, and supernatural elements playing on stage, the audience was treated to a moving performance, as they watched these women struggle to claim their own right to a happy ending. It felt gratifying to see them come together on stage.

Annie (Margot Gage, BC ’20) is a first-generation American who travels back to her mother’s native country in order to brush up on her Russian. Wide-eyed and eager to please, she acts as the audience’s introduction to a country that has emerged from an era of oppression and starvation. Annie also meets a handful of its wearied yet effervescent women—including Masha, played by Nell Bailey, BC ’19, and Katya, played by Lhana Örményi, BC ’17—who befriend her and show her the ungentle city nightlife.

The story is set in post-Soviet Russia, but there is a sense of contemporaneity which the directors explicitly nod to in the play’s program.

“This [story] tells people that this is not the time for running away or hiding. This is the time to stand up and fight,” Cramer and Herrnson’s director’s note said. In the case of “Fairytale Lives,” oppression lurks in every corner, hiding in the form of bears, witches, and flying potatoes.

The play works best in the moments when the women come together as a chorus. The use of sound is powerful in “Fairytale Lives,” sending chills down the audience members’ spines as they listen to the actors’ high-pitched keens, growls, and nursery rhyme chants.

The use of sound also elevates the sense of eeriness that lingers throughout the play, especially at moments such as when Auntie Yaroslava (Haley Kane, BC ’19), the sinister babushka, tells Annie she can smell something. “Not body spray,” Kane says. “I smell your bones.”

The lighting in this production, designed by Tracy Walker, BC'19, should also be commended. A fantastical concoction of purples, reds, and blues, it played a large role in shaping the play’s narrative, hiding and revealing pockets of magic and sinisterness by contrasting yellow natural light and spotlights with fluorescent colors.

One weak part of “Fairytale Lives” was the choppy, fragmented way the different stories were stitched together—a rather conventional combination of monologues, breaking the fourth wall, and skits. However, it had less to do with the exuberant efforts of the characters than of the play itself.

Credit must be given to Bailey and Kane for their strong performances. As the chain-smoking and steely Masha, Bailey presented a vulnerability that made the character both endearing and alien. In the case of Kane’s character, the actress managed to balance the delicate line of uncertainty as to whether Auntie Yaroslava was just a little disturbing or downright evil, forever keeping the audience in suspense.

Ultimately, Cramer and Herrnson’s adaptation of “The Fairytale Lives of Russian Girls” was a triumph. It was a rich and distinctive production, buoyed by the talented efforts of the cast and crew. Perhaps the most pleasant part of it all was seeing the different creations come all together on stage: lighting, sound, and strong acting.

As a story about a group of women’s determination to survive in a harsh and often unforgiving world, Cramer and Herrnson’s production is a pertinent reminder of the importance of courage and resilience.