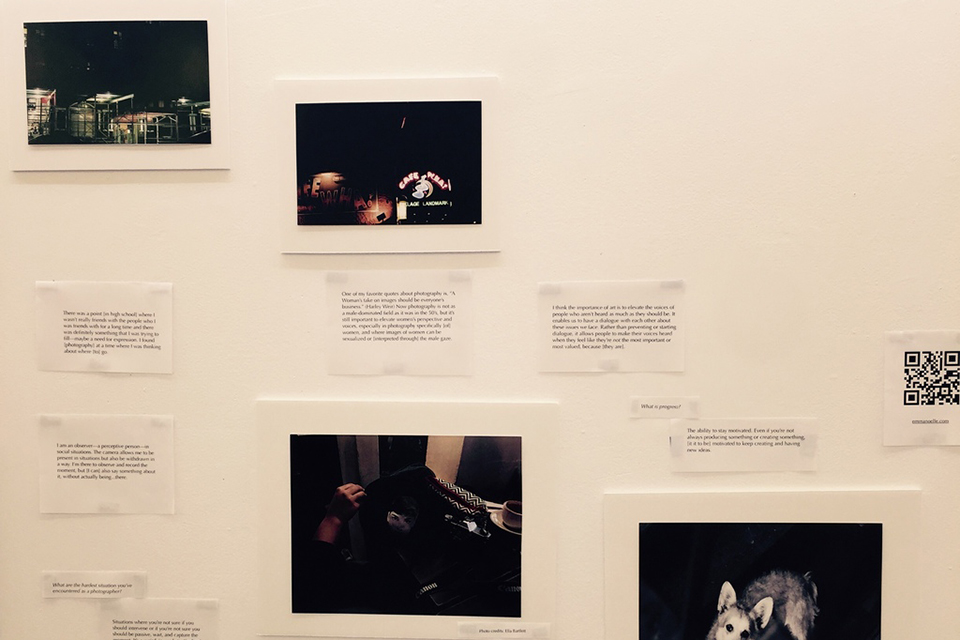 'The Interview' is on display in the Altschul Tunnel Gallery from April 12 to 20.

The basement of Altschul Hall is an unusual location for a makeshift gallery. But brightly lit by sunlight, the Barnard International Artists Series’ mural—on display in the Altschul Tunnel Gallery until Thursday—hangs opposite the mailboxes, exploring the creative minds of six student artists of various disciplines.

Titled “The Interview: student artists display,” the mural is a mix of printed excerpts of interviews with the student artists, copies of their artwork, and photographs of the artists.

“I wanted [the mural] to involve movement a lot, so I just pasted the interview up on the wall. I kind of put the quotes in, like, a wave,” the student administrator of the series, Ella Bartlett, BC ’19, said. “I wanted it to be interactive in that way.”

The main objective of the series, which was founded by Barnard adjunct associate English professor Hisham Matar in 2012, is to invite a renowned artist to Barnard’s campus to speak each fall. This year, Bartlett wanted to start involving students in the series’ projects.

“Students are artists too,” she said. “What is it like to be from another culture and country and come here? Students have a voice too, not only the professional artists.”

The six participating student artists are from various backgrounds with different values, as reflected in their works. One of the artists, writer Simi Akinola, BC ’18, grew up on Long Island, but her family is from Nigeria.

“I write with my experiences in mind, specifically how my family acts in a cultural setting,” Akinola said. “If I were to be greeting someone or to be handing someone something, I would never use my left hand and it would always be my right hand. Small things like that. I would subconsciously write them into the story.”

Dancer Nadia Halim, BC ’19, explained how she uses her art form as a platform to express her views.

Even works of poetry were included in the mural. The author of the poems, Viviana Prado-Núñez, CC ’20, won the the gold medal in the 2016 Scholastic Art & Writing Awards for her poetry and short story and is also one of the finalists for the 2017 Burt Award for Caribbean Literature for her self-published novel, “The Art of White Roses.”

The diversity of media and backgrounds that Bartlett aimed to represent led her to expand her own definition of art.

“Even that makes me question, is engineering an art? Why didn’t I pick an engineer or an architect?” she said.

The disparate pieces of paper containing the interviews and different art forms created a sort of coherence when viewed together on the wall, a mural of images and words and an art piece in its own right. The fundamental question of the mural, in Bartlett’s words, is, “What does it mean to create, and what does it mean to have an urge to create?”

Through the mural, the artists respond to this question in different ways. Exhibit contributor Brent Morden, CC ’19, whose original music composition was displayed in paper form as part of the mural, has one version of the answer.

“To me, art is a very individualistic process. And through the act of creating art, the artist has agency,” Morden said. “They have control over what they can create, which I think is a very powerful and attractive aspect of it.”