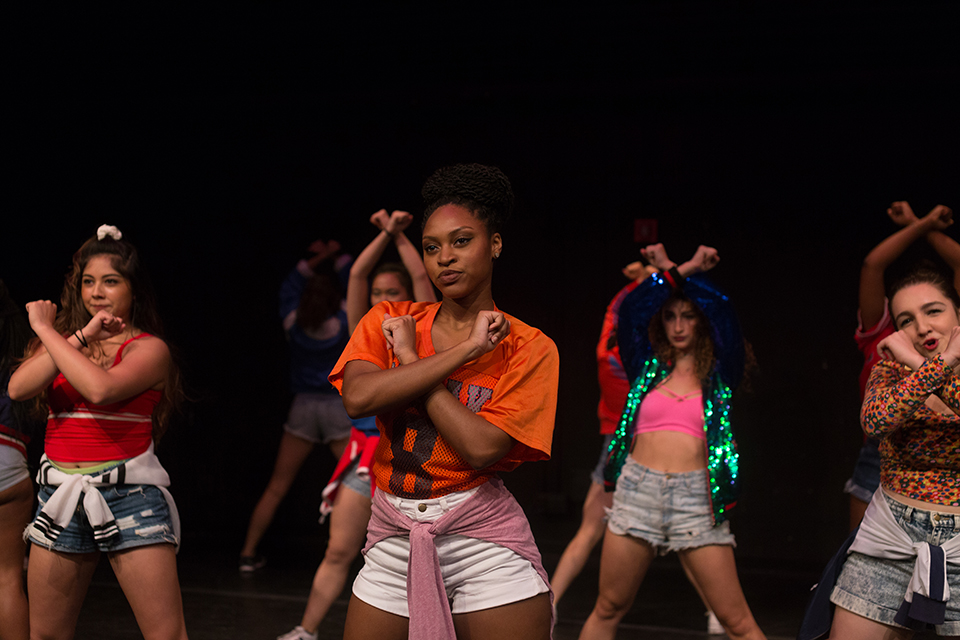 Members of Onyx performed 'Girl's Night Out' in celebration of their new all-female dance group status.

“What do you do to get ready to go out?” an emcee asked the crowd gathered in the Lerner Black Box Theatre on Saturday night. Hip-hop dance troupe Onyx celebrated officially becoming an all-female group with their aptly named “Girl’s Night Out” Spring Showcase, which took place from April 21 - 22.

“Watch the Onyx promo video on repeat!” one audience member cried in answer to the previous question the three emcees posed to the crowd. The response was met by a sea of uproarious cheers.

Onyx delivered four high-energy sets during each performance, interspersed with performances from other campus performing arts groups. Each set featured a different costume, from a varied mix of colorful ensembles for their first set to the uniform red- and black-checked flannels they wore for their last piece. They grooved along to such songs as Ariana Grande’s “Into You” and Ed Sheeran’s “Shape of You.”

Between sets a cappella group Columbia SHARP, looking dapper than ever in matching suits with bright blue pocket squares, performed a medley of tunes. They had the audience singing along to Donnie Trumpet & The Social Experiment’s “Sunday Candy” and Bruno Mars’s “24k Magic.”

Co-ed hip-hop group Raw Elementz also made an appearance, keeping the energy up with a couple of fast-paced numbers in between Onyx’s sets. Drum group Voltage banged out a few ditties before the emcees came back on stage to introduce Onyx’s dynamic last number, reminding everyone of Onyx’s slogan: “You’re mad ‘cause your man’s a fan.”

Given the rowdiness of the crowd, and the nonstop cheering and shouts of encouragement to individual dancers that were a constant throughout every single number, it was hard to argue with that statement.