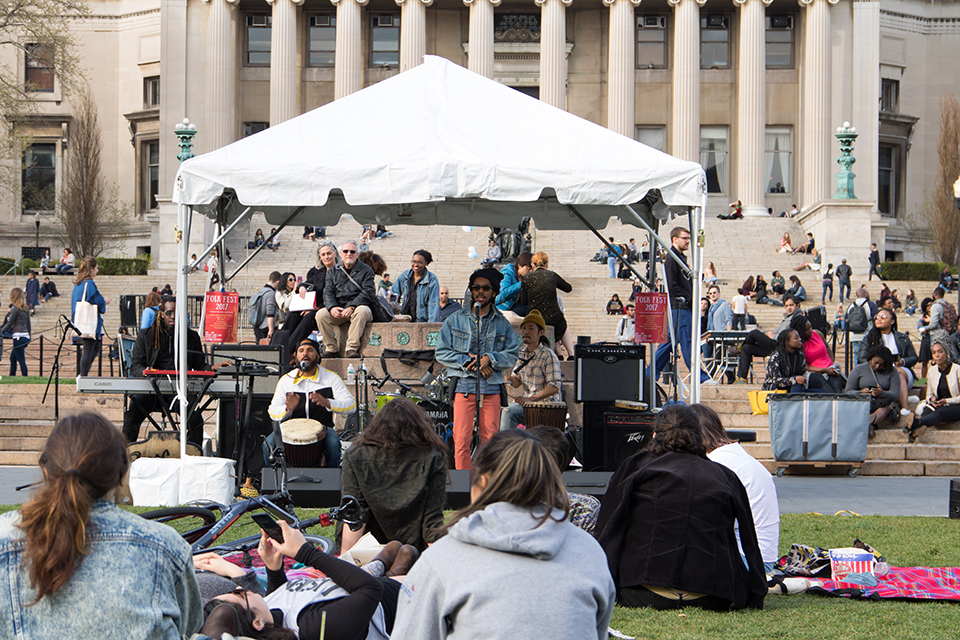 Postcrypt Coffeehouse held their ninth annual folk festival on the lawns outside of Butler Library.

Sunny skies and folk music drew crowds of Columbia students together at the heart of campus last Sunday afternoon for the all-day Postcrypt Folk Festival.

The event was hosted by Columbia’s student-run Postcrypt Coffeehouse, which holds weekly live performances on Friday and Saturday nights at Postcrypt’s café and music venue in the crypt under St. Paul’s Chapel.

Performers included Brown Rice Family, who were recently featured in Carnegie Hall’s Neighborhood Concert Series, and Heartland Nomads, who released their first EP “Small but Fortunate” last year. Additional performers were Charlie Jack Fuertsch and Whiskey River, Megg Farrell & Friends, Dirty Bird, The Daggers, and Vienna Carroll and Keith Johnston. The artists played for not only students gathered outside of Butler Library, but also prospective students and their families passing by the festival on the way to Days on Campus activities.

Performers highlighted the diversity of music styles within the folk genre, including influences from ska, reggae, and alternative indie.

Brooklyn and Cape Cod-based group The Daggers began the show with a blended sound of upbeat, alternative music. Most notably, the tenor saxophone player added an incredible texture to the harmonization of vocals. The group peppered in corny jokes in between their original songs, which included “Socially Conscious Lesbian Beach Party.”

Brown Rice Family performed an energetic set comprised of their own tunes and covers of Soulja Boy songs, which caused audience members near the stage to dance.

“Angela has introduced a bit more diversity into the Crypt this year, which has been great. In terms of sound and also representation, more people of color [are] playing, which is awesome,” Martinez said. “Folk is a notoriously white genre, so it’s been great seeing it kind of change up its sound this year.”