Frolicking through Arden and Columbia’s campus: KCST’s “As You Like It”

Frolicking through Arden and Columbia’s campus: KCST’s “As You Like It” 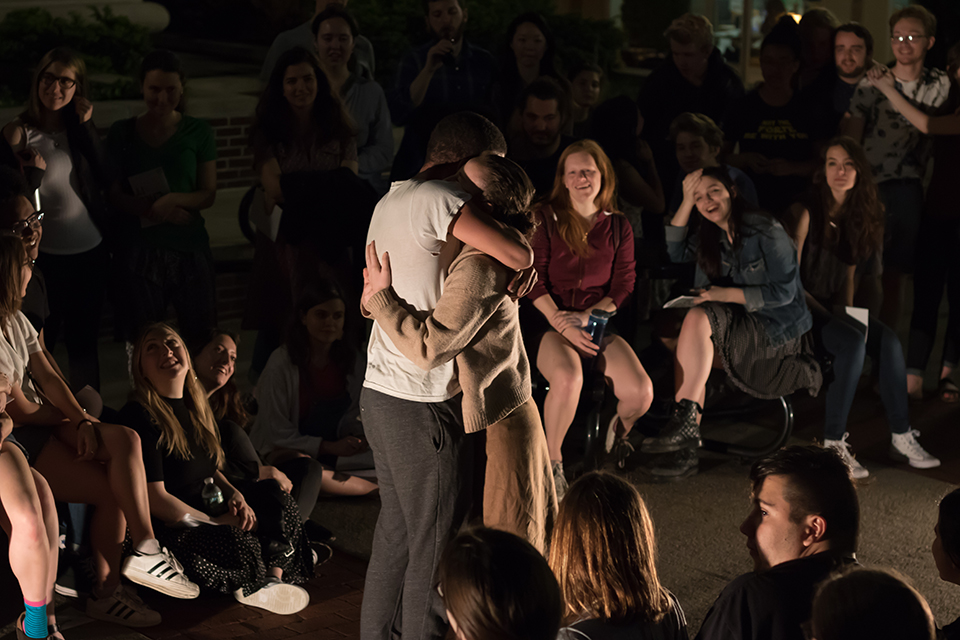 A large group of people milled around Pupin Plaza in the balmy night air—indeed, a much larger crowd than one usually sees in front of the physics building at midnight on a Friday.

But this was not an average Friday night, as a throng of people holding signs and megaphones suddenly burst from the lobby of Pupin and dispersed amongst the crowd to spread their message. “Dump the Duke!” they yelled, provoking onlookers to chant: “Hey hey, ho ho, Frederick has got to go!”

The “Frederick” these protesters were referring to was the fictional Duke Frederick of William Shakespeare’s “As You Like It.” This was not another Columbia protest, but the King’s Crown Shakespeare Troupe’s annual roaming spring show.

Founded in 1995 as a response to the exclusivity of the Varsity Show, which has a very selective casting process, KCST accepts everyone who auditions for their spring show, which performs its Shakespeare play of choice in various locations around campus. This year’s show, which ran from April 27 to 29, was a fun and visually stunning portrayal of the classic comedy.

Only the Friday night show was performed at midnight, while Thursday and Saturday’s started, more typically, at 8 p.m. The midnight audience, as per usual, was larger and rowdier.

“In creating the production we’ve tried to balance the energies of the two shows. The 8 o’clock is a very different kind of audience than [the midnight] audience,” said director Sam Balzac, CC ’17.

It was occasionally difficult to hear the actors over the enthusiastic reactions of the audience. Crew members also had some trouble directing the massive crowd of onlookers, who were not always sure when and where to move.

Despite these logistical issues, the production made beautiful use of the many locations on campus. Scenes which placed actors lounging in blossoming cherry trees and serenading each other in front of a gorgeously lit St. Paul’s Chapel were especially stunning. Columbia’s various lawns made for an excellent location for the forest of Arden, and the pillars in front of Schapiro made for a convincing court of Warwickshire.

Even more than the cherry blossoms, though, it was the outstanding cast that made “As You Like It” a success. Sophia Seidenberg, BC ’19, shined as Rosalind, bringing two impressively distinct and equally enjoyable personas to both Rosalind and her alter ego Ganymede. Playing alongside her, Rose Meriam, CC ’19, was a master of timing and physical comedy, punctuating her lines as Celia with her body language and perfect strategic pauses. Molly Lo Re, BC ’17, got huge audience reactions for her comical role of Jacques and managed to make a fresh delivery of the famous “All the world’s a stage” speech.

Ultimately, the most defining feature of KCST’s “As You Like It” was the amount of enjoyment the audience got from taking in the Shakespearean comedy. As Balzac said, “If people have fun, then it has succeeded.”