“Home Improvement,” A warehouse of art

“Home Improvement,” A warehouse of art 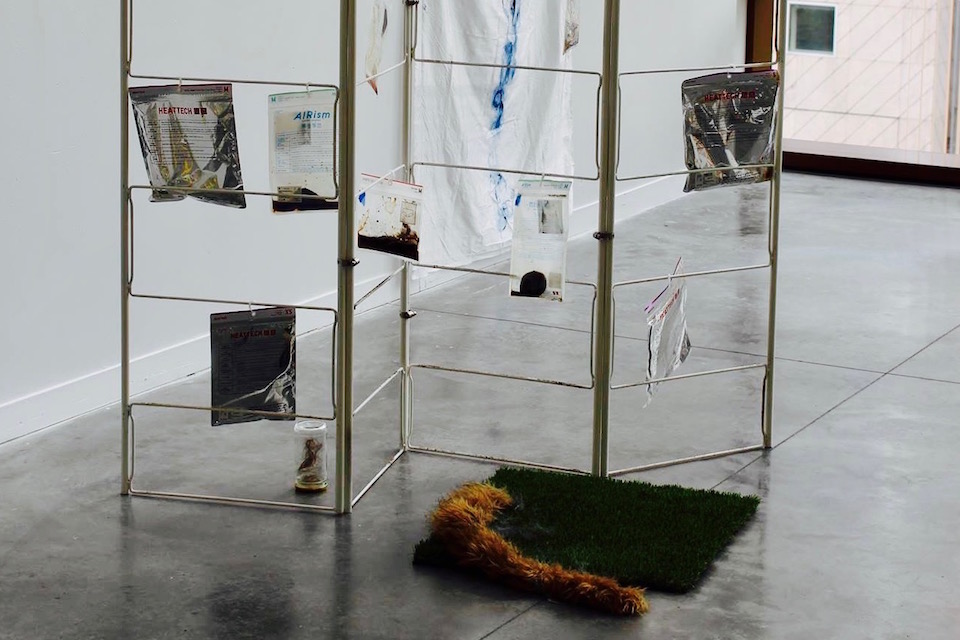 Mira Dayal's work "untitled" was on display at the "Home Improvement" Senior Thesis Exhibition in the Louise McCagg Gallery over the weekend.

The Diana Center’s Louise McCagg Gallery transformed into an artistic warehouse last Thursday, as family and friends attended Barnard’s annual visual arts senior thesis exhibition. Amid the strong smells of cheese and wine, paint and plaster, the atmosphere was quiet but buzzing with energy, with many of the student artists engaged in earnest conversations about their work with visitors.

The theme for this year’s exhibition was “Home Improvement,” which the rugged, warehouse-space vibe of many of the works helped to convey.

“All these students’ works are very individualistic, but if there was an encompassing theme for this year’s collection, it would be DIY aesthetic meets roughness,” Ada Potter, BC ’11 and the visual arts department’s teaching assistant, said. It was inspired by the students’ studio in Barnard’s 600 West 116th Street residence hall, a funky apartment that had the effect of domesticating the space around them as they worked on their art.

The students explored a wide choice of mediums, which ranged from traditional forms such as oil and canvas to copper plates and plywood. One stunning display was the series of untitled pieces by Mira Dayal, BC ’17, which explored the concept of hair. Dayal used a number of objects, such as rotten fruit, turf, ginger, ash, oil, and yes, hair; a lot of it, tangled balls taken from her shower drain and pinned to the walls and scattered across surfaces.

“I was thinking a lot about how to respond to politics without an overt representation of politics, instead focusing on the effects of politics, which for me, included estrangement, fascination, nausea, and disgust,” Dayal said. “Hair specifically as a medium interested me because … as a sculptural element (the thing itself), it can be quite off-putting for people. Taking that medium and using it in an architectural or aesthetic way felt political and visceral.”

Chloe Kim, BC ’17, used a combination of digital print and metal in her work. “This is a commentary on social media and how people represent bodies,” Kim said about her thesis, which she titled “Peach Emoji Series.” They imitate blown-up Instagram photos featuring a naked Kim as alter-ego “Peachy-Peach,” with credit cards and bills layered over her body.

“We’re in an age that’s definitely exhbitionist, but still desires to be anonymous,” Kim said. “The desire to exhibit my body and sexuality is equally challenged by the urge to withdraw in privacy.” Through her work, she sought to explore how society plays a role in aiding these conflicted feelings. She used metal in her art so that, when peering at it, the viewer sees their own reflection. “I wanted people to confront themselves,” Kim explained.

Edra Stafaj, BC ’17, chose to stick with a more traditional medium: ink on small pieces of paper, bold black lines tracing out her memories. Why choose to use only black ink? “I’m depicting memories, and usually one thinks of them as colored in black and white,” Stafaj said. “It’s something that’s of the past.” Stafaj used family photographs as a point of reference, but at some point during the process, put them down and began working from memory. “However, I am aware that my mind cannot capture reality as it is. When it is handed the pen, my mind will try to rewrite the past in abstract forms.”

This year’s Senior Thesis Exhibition showcased an arresting array of sensory imagery through the artists’ use of colors, materials, and smells: a perfect representation of the warehouse aesthetic that inspired them.