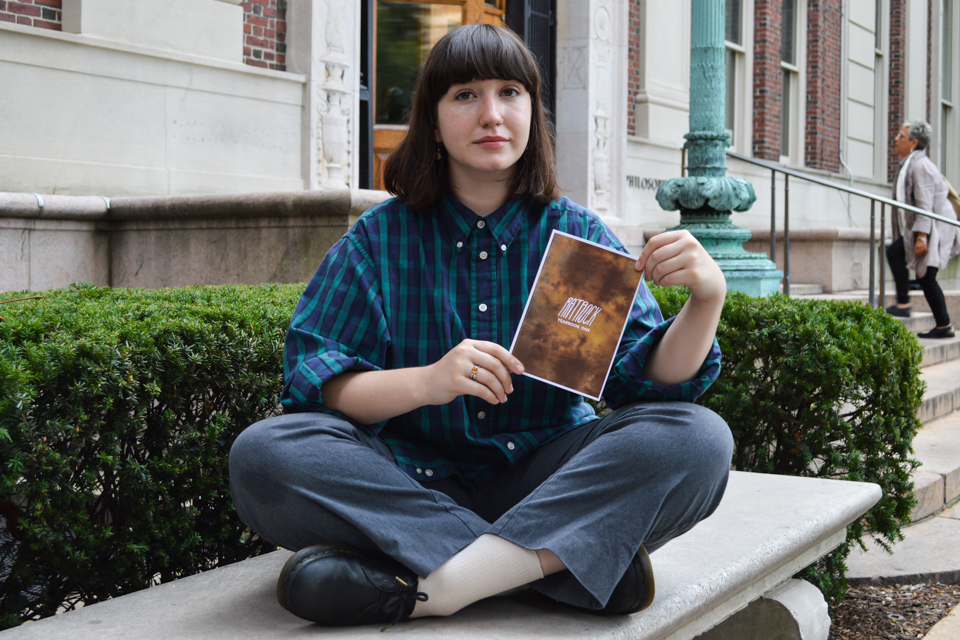 Caroline Wallis, president and editor in chief of Ratrock Magazine, helped to found the organization in 2016.

On a humid Monday night, a diverse group of undergraduate film enthusiasts gathered in the Intercultural Resource Center. They were there to discuss problems they all faced as underrepresented artists on campus, one of which was that while Columbia has strong programs for declared visual arts and film majors, there is a lack of resources for artists on campus who aren’t art or film majors.

It is a gap that some students are trying to fill by creating platforms and communities to support the Columbia artists and filmmakers who do not pursue a major in their craft.

“I think that the arts community, in general, can feel very exclusive,” Camille Ramos, CC ’20, a non-film major, said. “It can be hard to find time to create, especially if you feel like you’re competing with those who are devoting their time to it and are able to do that because that’s what they’re majoring in.”

Ramos is the director of the Society for the Advancement of Underrepresented Filmmakers, one of a few arts-oriented groups on campus seeking to address the gap. SAUF, which formed in 2012, provides support for filmmakers—particularly those who are women and people of color—by creating a community where they can create and share work with one another.

One such way the group supports its members is by helping them acquire equipment. Though the University owns an extensive collection of equipment for students to use, only film majors are able to rent them out, and often only for classes.

“We do not have a system whereby undergraduate systems, even if they are declared majors, are simply able to check out equipment for their own purposes outside of class,” Director of Undergraduate Studies in Film Robert King said.

This leaves students not enrolled in film classes or majoring in the department to self-finance their own projects, an expense that can make filmmaking inaccessible for many students, according to SAUF Executive Board Member Indigo Dewdrop Ghonima, CC ’20. To help address this, SAUF helps students rent equipment through Barnard’s IMATS, which runs the SLOATE Media Center and Equipment Room.

SAUF also connects student filmmakers, helping send out emails on behalf of students looking for directors, actors, or producers for their projects.

As of this semester, the group is looking to expand its focus to include the entire underrepresented arts community at Columbia.

“There is a need at Columbia for there to be a platform for those who are typically underrepresented in arts and media, not just film,” Ramos said. “Even though we were founded by filmmakers and all of our executive members are filmmakers, we want to make it a space for all artists to feel welcome.”

Another group of students spotted a similar issue with underrepresentation and a lack of platform for artists to display their artwork, but with a greater focus on student art groups over individuals. The group of students—Caroline Wallis, BC ’19, Jacquelyn Klein, CC ’19, Alexandra Warrick, BC ’17, Joelle Milman, BC ’17, and Jeannie Rhyu, CC ’17—created arts and culture magazine Ratrock in response.

Launched in fall 2016, Ratrock Magazine serves as a forum for any student artists to display their work online—whether it be film, poetry, or painting. It publishes an online issue each month and a print issue at the end of the year.

“We figured out what we really wanted to do—what Columbia needs is an art magazine that can encompass all of the arts, and not just visual art,” Wallis, the president and editor in chief of Ratrock, said. “There just isn’t a forum for it the way there is for theater, dance, music.”

The magazine has since featured 90 student artists, each of whom have their own profile page on the Ratrock website, alongside occasional accompanying interviews.

In addition to helping student artists have a platform to be published on, the magazine is trying to encourage students on campus to become more engaged with the arts community.

“There’s a big focus on pre-professionalism at Columbia, so, while some arts groups are incredibly rigorous and have students who are high achievers in their art form, many see the arts as frivolous and non-essential to their financial future,” Wallis said.

Though the group is awaiting recognition from the Activities Board at Columbia, which requires that recognized groups be active for at least two semesters, Wallis is looking to further Ratrock’s mission by partnering with other arts groups, like SAUF.

Both groups are working toward a common goal of creating a more inclusive artistic community at Columbia, whether that means helping students gain access to equipment or creating an online portfolio. As Ramos said, “Just because you’re not majoring in art doesn’t mean your work is any less valid.”

SAUF Ratrock Magazine Society for the Advancement of Underrepresented Filmmakers