LateNite Theatre is DTF: Down to (Have) Fun

LateNite Theatre is DTF: Down to (Have) Fun 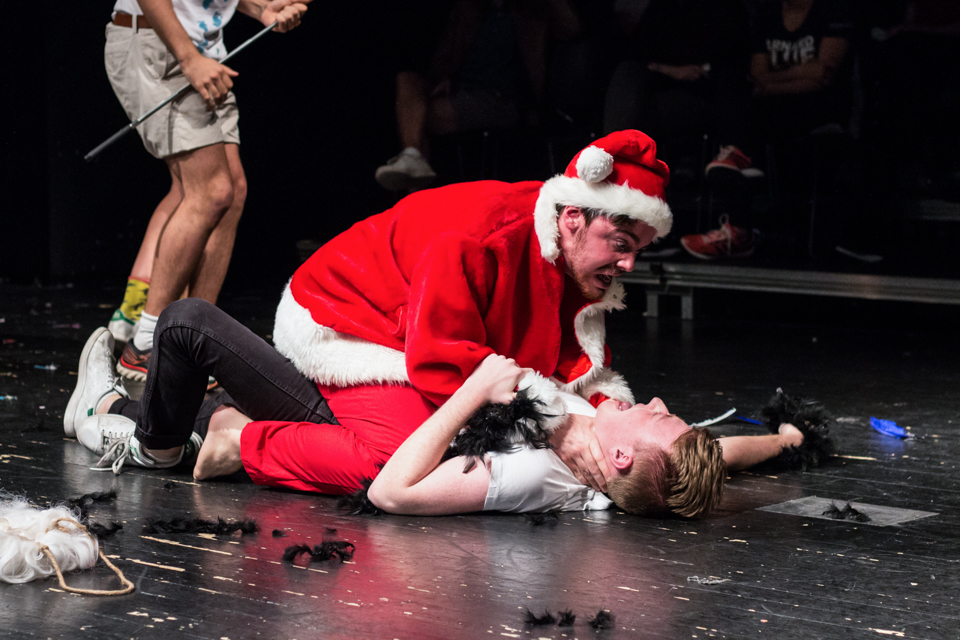 What makes LateNite different from other theater groups on campus?

“Everyone takes [Columbia theater] so seriously,” fellow co-president Matt Malone, CC ’18, added. “Let’s say you wanted to audition for KCST [King’s Crown Shakespeare Troupe],” Alvidrez continued, “you’d have to be Shakespeare’s best friend to get in.”

LateNite, a sketch theater group with a focus on absurdist skits, is a far cry from typical campus theater groups. Its semesterly ‘anthology’ performances--held at 11 p.m. in accordance with the group’s name--include six to eight skits with bizarre subject matters.

LateNite has been around since 1995, when it was founded by four Barnard English majors who, according to Alvidrez, “wanted a space to experiment and create … whatever we do.”

Although LateNite is selective and accepts only 30 to 40 out of the 100 actors who audition, it requires no previous theater experience.

“My roommate, who’s never acted before in his life, who was on the track team, was arguably one of the funniest people we had last year,” Alvidrez said.

The group’s popularity has increased in recent years as more people have come out to audition, with the group growing more selective as a result. Malone attributes this to the rising popularity of groups of friends deciding to join together, and because “when people join it once, they don’t want to stop doing it, so it keeps on amalgamating and getting larger.”

At the end of each semester, the group performs its anthology of student-written, directed, and acted plays. It also does various smaller events throughout the semester, such as last year’s talkback with SNL director Don Roy King. The group opens submissions for the scripts at the start of the semester, when it puts out a call to the entire Columbia community for play submissions of up to 30 pages in length.

The main factor in choosing actors for the anthology, Alvidrez explained, is “People who are ... DTF: down to fun.”

The mood of each semester’s anthology follows that theme as well.

“We have a very particular branding for ourselves,” Alvidrez said on LateNite’s brand of offbeat comedy, which he and Malone described as “goofy, mean, and experimental.” For instance, last year’s performance included flowers dropping acid and the distribution of plastic utensils to audience members for no apparent reason.

While the irreverent nature of LateNite’s material may make the group seem purely comical, Malone says there is a balance between humor and art.

“There’s a lot of work put into the skits, and the acting and the directing and all of that stuff, so I would say that it’s the perfect combination of silly and serious,” he said. “The humor seeps into the atmosphere in a way that it doesn’t in other productions”

Joining LateNite means joining a community. As Alvidrez said, “even if you’re not in the cast for that semester, our parties and our events and everything ... as long as you’ve done LateNite you can come through. Everyone’s welcome, regardless of if you’ve done it once or eight times. We pride ourselves on being a community.”

Malone explained that the goofy nature of the material helps the group bond.

“You could not take this seriously if you tried,” he said.