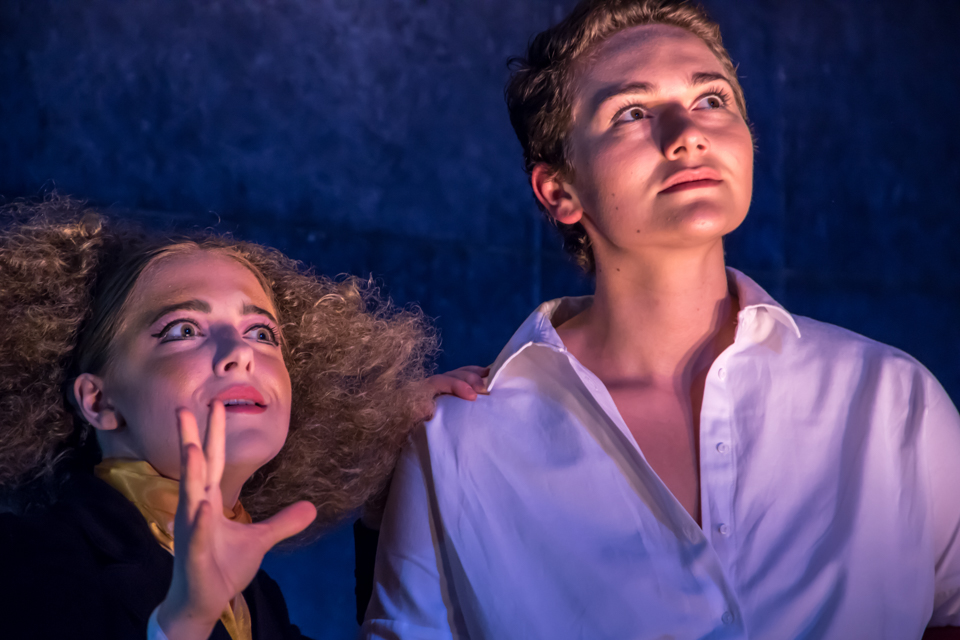 “Mary Stuart” opened Thursday night and will be running at the Minor Latham Playhouse from Friday through Sunday.

The production is directed by Gisela Cardenas, GSAS ’04, who directed Rainer Werner Fassbinder’s Katzelmacher at Barnard in 2013. It centers around the clash between Queen Elizabeth I, the reigning Queen of England, and Mary Stuart, the Queen of Scotland captured in the Tower of London by Elizabeth, waiting to hear her punishment for allegedly conspiring to capture the English throne.

Opening in the darkly lit and stark prison cell in which Mary has spent the past months, the play explores the last days of Mary’s life and the dramatic political events that push Elizabeth toward signing the warrant for Mary’s death.

“We wanted to make the play present, make it voracious, tangible, full of life, and to kill the idea of classics as something old and boring, and to make it speak to us now,” Cardenas said.

“Mary Stuart” successfully accomplishes this goal, pushing an old play into a modern context and making explicit that humanity has always dealt with political conflict.

The costume design, done by Ntokozo Kunene, leaves the time period in ambiguity, and evokes the futuristic and zany Capitol citizens of the “Hunger Games.” Mary and her ladies are dressed as if they are in an all-female rock band, and Elizabeth’s court is an amalgamation of traditionally Elizabethan clothing and modern formalwear. This balance of time periods is also seen in the way the language of the play is handled, as the actors speak the formal dialogue in a casual and colloquial tone, bridging the gap between the past and the present.

The play is a challenging one, with extreme emotions, complicated language, and a fast pace. The ensemble cast navigates this challenge together, and the strength of the performance is definitely seen in the ensemble’s combined efforts. Each cast member contributes to the tension and drama of the play, delivering complex and emotional performances.

One standout element, however, is the similarity in approach of the actors playing Queen Elizabeth (Julia Dooley, BC ’20) and Queen Mary (Lily Whiteman, BC ’19). The two approach their roles confidently, and their queens are both self-assured and regal but with deeper emotions and frustrations always bubbling beneath the surface. Their parallel styles make a powerful statement about how the two queens are both trapped by their positions in politics and the public eye.

The first act culminates in the meeting between the two queens, as they passionately clash over the events that brought them together. While this moment is historically inaccurate, it allows the play to speculate about what would happen if this meeting had happened in reality.

“I am you. I am exactly as you are,” Mary says to Elizabeth, prostrating herself and begging for mercy. These two have their own personal dreams and desires, but those are crushed by the political nature of their relationship. The show highlights what a shame it is that the two were unable to coexist, as both are extraordinary female leaders in history, and leaves the audience speculating about what could have been.

In Schiller’s original play, about half of the characters are male. In order to adapt the play for the Barnard Theater Department, Cardenas decided to cast many of these roles with female actors, shifting the power dynamics of the play.

Cardenas thought that this recasting would provide a “challenging and resonant” opportunity for undergraduate women to explore the power of femininity.

“This takes an old, German, and classic play and flips it up, allowing us to explore who we are as women and how we fit into society,” she said.

While the two remaining male actors give strong performances (Krit McClean, GS, as the Earl of Leicester and Wilson Greaton, CC ’18, as Talbot), the women are obviously in control. Between warring queens and manipulative female politicians, the women clash and argue, often tearing each other down for the sake of political gain.

Cardenas said the production is ultimately exploring how “patriarchy is living inside some women as well.”

“This play is debating how women can sometimes be the worst with other women,” Cardenas said.

“Mary Stuart” opened Thursday night and will be running at the Minor Latham Playhouse from Friday through Sunday.