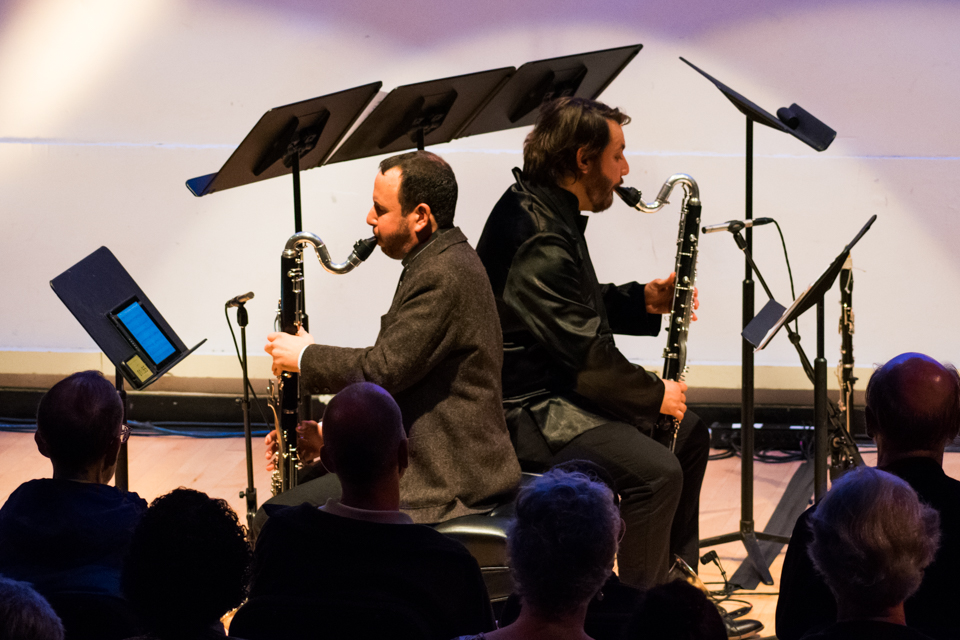 Agosto, who is currently studying at Montclair State University, was inspired by a concert featuring a Beethoven septet that both Agosto and Rubin attended. “I was sitting next to a man with a portable oxygen machine [that was] clicking and hissing what sounded like breath to me,” Agosto said.

The sound reminded Agosto of the bass clarinet’s deep, resonant timbre and extraordinarily wide range, which was explored during both “Rift” and the other pieces performed. Repertoire for bass clarinet was rarely written until the contemporary era, and the concert featured pieces written almost exclusively after 2000, with the exception of one written in 1993.

During the concert, Rubin and Dukovski emulated the long, sharp intakes of breath associated with trouble breathing and used the bass clarinet’s many keys and other features to create the mechanic sounds of an oxygen machine.

“I liked this idea of the oxygen machine because the oxygen regulates your breath. It keeps this rhythm so you can keep functioning,” Agosto said. The idea of functionality also tied into the exploration of social anxiety in the piece and how it separates a person into a public and a private persona.

To highlight this internal separation, Agosto asked the two clarinetists to sit with their backs facing each other. “I wanted to explore the idea of them representing one being and show how they separated. I wanted to show this separation of a person’s character,” Agosto explained.

Like many modern and contemporary artists, Agosto and the two performers tried to come up with new sounds for the bass clarinet to create. “I would produce a sound by accident, and she would try to present it because it seemed natural to me. She had such a sensitive ear,” Rubin reflected. Many of the sounds in the piece did succeed in sounding organic in a way that perfectly pure and clean tones often do not.

The concert also included “Derwischtanz” by Peter Eötvös, which was far from tonal. The different moods it explored were conveyed much more through the textural and rhythmic aspects of the piece. The actual pitches of the piece were so secondary that the sounds emitted by the bass clarinets often more closely resembled microphone feedback than wind instruments. The intimacy of the concert heightened the experience—the audience was seated on the stage along with the clarinetists.

During both Eötvös and Agosto’s pieces, speakers stood beside the clarinetists and played two additional bass clarinet parts that had been pre-recorded by the two artists before the show.

“In the actual performance, we found a way to synchronize our performance with the tape. We had timers on our stands, and we had little cues so if we got off we could come together at this one moment. The piece was flexible so we could always kind of find where we were,” Rubin said.

The sounds from all four clarinets blended seamlessly onstage, each one presenting the novel ideas and themes that Agosto wished to convey. Many of the sounds were so organic that it often appeared as if the players were improvising them. Throughout the 20-minute-long piece, the audience members waited with baited breath for each new sound and effect, the music dictating their inhales and exhales—as if it were the oxygen machine of Agosto’s piece.