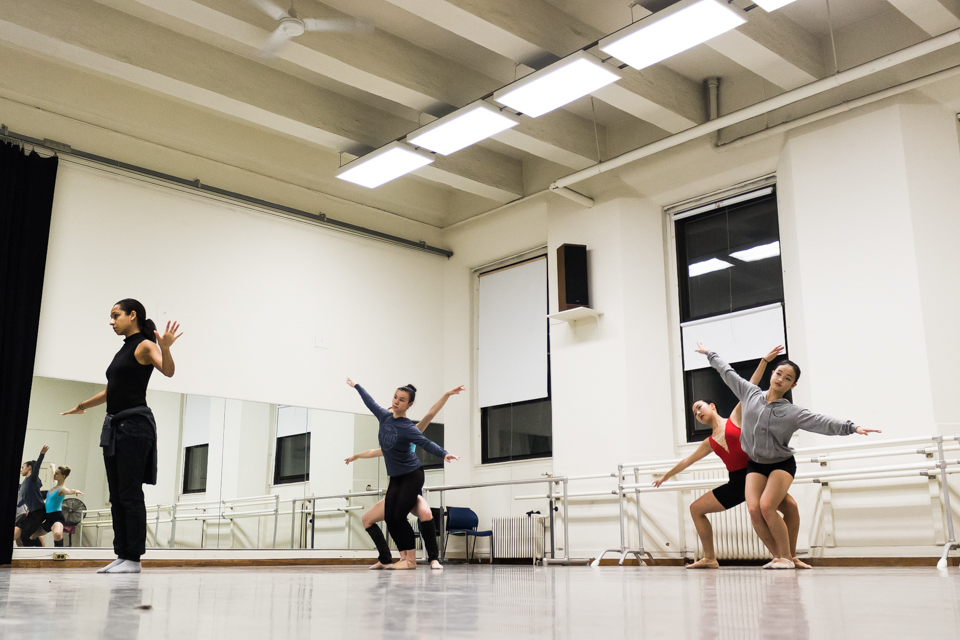 Schreier has choreographed for the Columbia Ballet Collaborative four times, and is returning to Barnard for the Dance Department's annual NYLA performance.

Choreographer Claudia Schreier is pushing boundaries in ballet. She is one of the first full-time freelance ballet choreographers in the art form, as well as an exceptionally innovative artistic voice.

Schreier’s ingress into the world of choreography was developed by the dance community at Columbia, where she choreographed for the Columbia Ballet Collaborative in 2010, 2011, and 2013. She returned this spring to restage her early work, “Harmonic,” for CBC’s spring showcase. The exposure she gained from these opportunities primed her for her future endeavors with companies and dance festivals around the country.

She came back to Columbia again this fall and is choreographing a new work, “Splinter,” on six students for the Barnard Dance Department’s upcoming performance “Barnard/Columbia Dances at New York Live Arts,” Nov. 30 through Dec. 2.

Schreier’s aspirational attitude and powerful work ethic have shaped her unorthodox career path, which has engendered equally original work. She employs the language of classical ballet technique, but her choreographic voice has a unique dialect, sometimes exchanging ballet’s traditional etherealism for a more modern earthiness, or incorporating jazzy steps and intense linear geometries.

Schreier said her movements spring largely from the music she chooses, and this is visible in much of her work. She often uses quirky, energetic instrumentals. It’s no surprise that the pieces she gravitates toward are classical with a twist, just like her choreography.

“Splinter” is choreographed to a manifold reed quintet of the same name by Marc Mellits. In the musical composition, rhythms of different tempos sometimes harmonically compound. Schreier highlights these parallel musical strains by mapping them onto different groups of dancers: One group melts with an overarching melody while another performs fast footwork to a pulsing metrical beat.

The non-classical influences in Schreier’s work led her to list versatility as the primary quality she sought when auditioning dancers at Barnard.

“They’re really adaptable and incredibly intelligent,” Schreier said of the six dancers chosen to be in her piece.

For these students to experiment with steps outside their classically-trained muscle memories, a mind-body connection is imperative.

“We don’t have a vocabulary for it, unlike traditional ballet steps, so she gives us key words or images. She also [physically] shows us a lot,” said Ellie Frith, GS ’20 and a dancer in “Splinter.”

Both Frith and fellow dancer Nicholas Rio, CC ’19, initially felt uneasy while attempting some of Schreier’s modernistic movements, but said their discomfort turned to gratification and exhilaration upon mastery.

“You have to walk into the studio doing things you’re uncomfortable with and just be open to the experience. You do feel exposed at times, but you know it’s a safe space to try new things,” Frith said.

“Her movement feels really good to perform when you get it right,” Rio said. “It’s refreshing to work with a choreographer who strikes a balance between a ballet base and something new.”

Schreier’s education at Harvard studying sociology and dramatic arts has served as a critical foundation for her choreographic ventures since she first began them as an undergraduate. Having damaged her body with numerous dance injuries, she found choreography to be similarly artistically fulfilling, but more physically accessible.

“By going to college, I became a different artist because I was exposed to worlds beyond my own,” she said.

Scheier described her choreographic pursuits as a “side-hustle passion project” after graduation, nourished outside of her full-time job as the manager of editorial content for Alvin Ailey American Dance Company.

Choreographers, especially in ballet, often begin as affiliates of a company. This is often the result of a company dancer’s interest in choreographing, or the hiring of an outside artist as a choreographer in residence. Schreier started as neither.

After her time at Harvard, she continued to choreograph on collegiate dancers at Harvard and CBC. A monumental opportunity came unexpectedly in 2013, when a friend brought Craig Salstein, founder of Intermezzo Dance Company, to one of the rehearsals in Barnard Hall.

“Craig walked up to me afterwards and asked if I was free the following January,” Schreier said. He asked to commission a piece from her for his company. “And it was that, just a one and done, out of nowhere. It changed my life,” she said. “I owe a lot to the Columbia community. A lot.”

Schreier has since seen her choreography performed at the world-renowned Vail International Dance Festival and the New York Choreographic Institute. She presented her first evening-length program, “Claudia Schreier & Company,” for the Joyce Theater’s Ballet Festival this past July. Six of her works were performed by dancers from New York City Ballet, Dance Theatre of Harlem, Los Angeles Ballet, and other companies. She recently made the shift to being a full-time freelance choreographer, a very rare position in the ballet world.

“I’ve been trying to carve my own path because there aren’t a lot of places to look to, to see what I’m supposed to do,” Schreier said. Little precedent has been set for ballet choreographers independent from large, well-financed companies.

“It’s really important to recognize that you don’t have to box yourself into what’s been placed upon you. There are options, and it’s up to you and how big you want to dream,” she said. “And I don’t say that to be fluffy...I do believe that.”