KCST’s Measure for Measure measures up

KCST’s Measure for Measure measures up 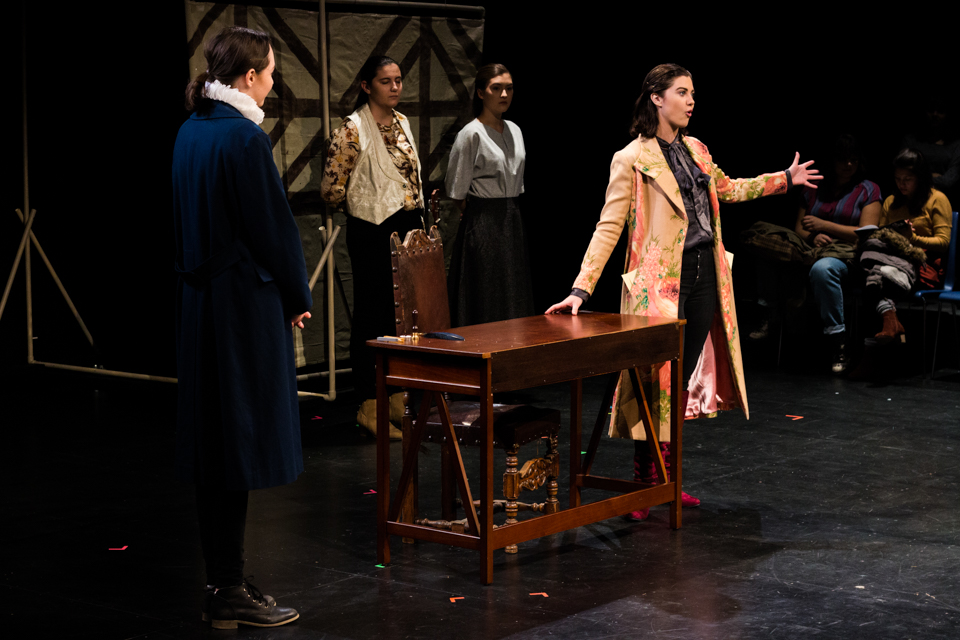 "Measure for Measure" echoes stories of sexual abuse and power dynamics prominent in the media.

It seems there could not be a more important time to stage William Shakespeare’s “Measure for Measure,” a play centered around the sexual coercion of a woman about to enter a nunnery by a powerful government official.

The King’s Crown Shakespeare Troupe performed the problem play, a certain type of Shakespeare play that is a mix between comedy and tragedy, this past weekend from Nov. 9 to 11 in the Glicker Milstein Theatre. The group delivered an emotionally intense performance of the work that landed well, despite a rocky start.

Director Sylvia Korman, BC ’18, was well aware of the play’s resonance with current sexual assault controversies, but said that the themes underlined in the piece are always relevant.

“I want to push back on the idea that we’re doing this play because people are talking about sexual assault right now in the media and in the world and in the Columbia community,” Korman said, “because I think that to say ‘Well, right now we’re talking about rape, and so we’re doing plays about rape’ is how you end up next year being like, ‘Well we did that last year, now we’re done.’ I think it’s all part of a larger [ongoing] conversation. It needs to be.”

KCST’s all-female cast brilliantly conveyed the emotional depths and internal conflicts of the play’s characters. AJ McDougall, CC ’21, was compelling as Angelo, the deputy left in charge of Vienna in the Duke’s absence, who tries to sexually coerce Isabella, passionately portrayed by India Beer, BC ’20. McDougall’s commitment to her character, which was evident in her body language and facial expressions, propelled her character far beyond the caricature of a villain to a complex human being with an evident inner struggle. Nell Bailey, BC ’19, also demonstrated a mastery of comedic timing in her role as Pompey.

The production began with the actors finishing getting dressed in their costumes and milling about on the stage.

“I wanted the audience to get a chance to see the actors as well as the characters,” Korman said. “There’s an even bigger suspension of disbelief that goes into seeing single-sex Shakespeare [than when seeing a coed cast]. I wanted to lean into that rather than trying to gloss over it. I knew that no one watching this play would think that those were men. So why not see them as women?”

While helpful in bringing the audience closer to the actors, this tactic set the performance off to a rather rocky start. It was harder to adjust and settle into the world of the play. The performers themselves also seemed to struggle settling into the roles they ultimately beautifully executed, stumbling over lines and leaving awkward pauses early in the show. The minimal set pieces, composed of four interlocking frames, made good use of limited space but were distracting due to their unclear purpose in many scenes.

However, the overall quality of the performances made the set a minor detail. The costumes felt fresh, incorporating a clever mix of modern dress with Elizabethan fashion. There was enough physical movement onstage to provide audience members on all three sides of the black box theater with a view of the performers and to keep the performance itself from feeling static.

“Measure for Measure” might deal with a world of moral ambiguity, but KCST’s rendition was a clear success.