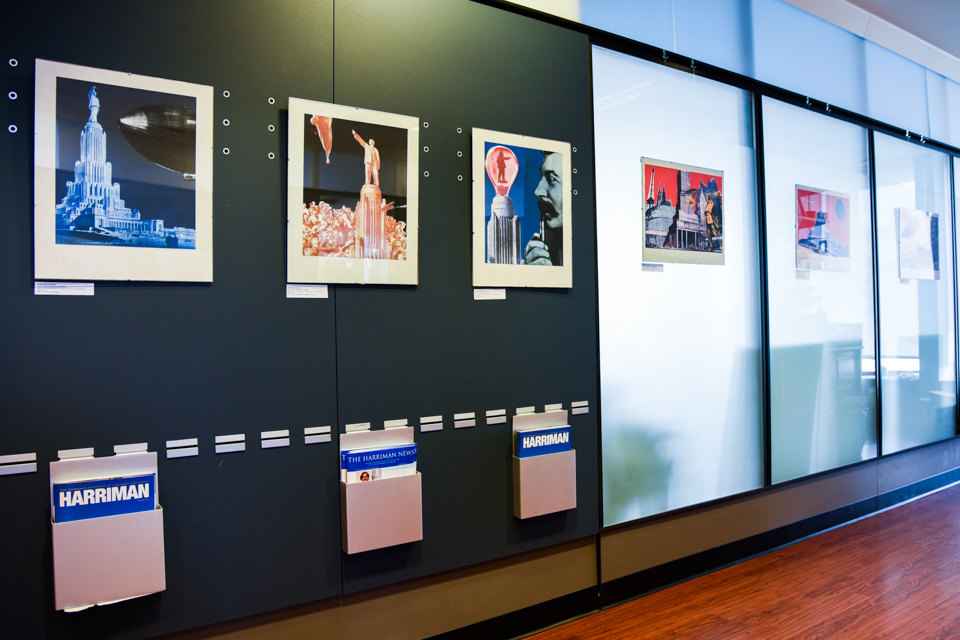 The Harriman Institute, Columbia’s academic center dedicated to Russian, Eurasian, and East European studies, celebrated the centenary of the Bolshevik Revolution of 1917 with the prints of Russian artist Mikhail Karasik in a new exhibit that opened this Monday.

“Mikhail Karasik: The USSR’s Tower of Babel,” co-sponsored by the Russian American Cultural Center and located in the International Affairs Building, celebrates 20th century Russian history and its legacy.

“This project has the interpretation of historical events that helps all of us to understand [that we are] witnesses of this glorious and failed socialism, to see how before our eyes, history became mythology,” art historian Regina Khidekel, founder of the Russian American Cultural Center, said.

Karasik, a graphic artist and a publisher at the forefront of theart movement known as the artist’s book, chose the Palace of the Soviets as the underlying theme in his series of lithographs.

Palace of the Soviets was a competition held in 1931 to design an administrative center and congress hall in Moscow, Russia. The final winner was Soviet architect Boris Iofan, who proposed a design of a building that would be 1,362 feet tall—making it the tallest building in the world. However, the construction of the palace stalled during World War II, leaving it unfinished with only a foundation.

According to the Russian American Culture Center website, Karasik saw two ideas that underlay the construction of the Palace of the Soviets project: the Bolsheviks’ desire to create under Soviet rule and to see the ideals of socialism begin to physically manifest themselves.

The show displays 22 lithographs from two of Karasik’s albums, “The Palace of Soviets. Design Competition” and “The USSR’s Tower of Babel.” The prints are relatively small—475 x 575 mm and 210 x 435 mm in dimension—and utilize bold, vivid elementary colors. His lithographs are comprised of prints of various architectural designs submitted to the Palace of the Soviets contest—including a building topped by a statue of Vladimir Lenin designed by Iofan. In some other prints, Karasik included surreal images of vegetables, insects, and fish among the monuments.

The exhibition is deeply rooted in the history of Russia, strongly resonating with Russians who saw the rise and fall of socialism and its symbols firsthand.

“To Karasik, the Palace of Soviets is more than an architectural project. It is a symbol of utopia, a symbol of country dissolved,” Khidekel said during her speech at the exhibition’s opening.

“I think you have to have a Soviet background to relate [to the artworks],” said Olga Shoka, a member of the Russian American Cultural Center who attended the gallery opening. “People moved to the United States from Russia but this history is still part of their soul.”

Khidekel expressed a similar sentiment regarding how the historical event takes on a personal significance.

“It’s a really huge historical experiment and this project unfortunately failed, and the main building was never built,” Khidekel said. “But we’re left with this sense of being part of this creative experiment … where we suddenly found ourselves participants in the creation of this mythology.”