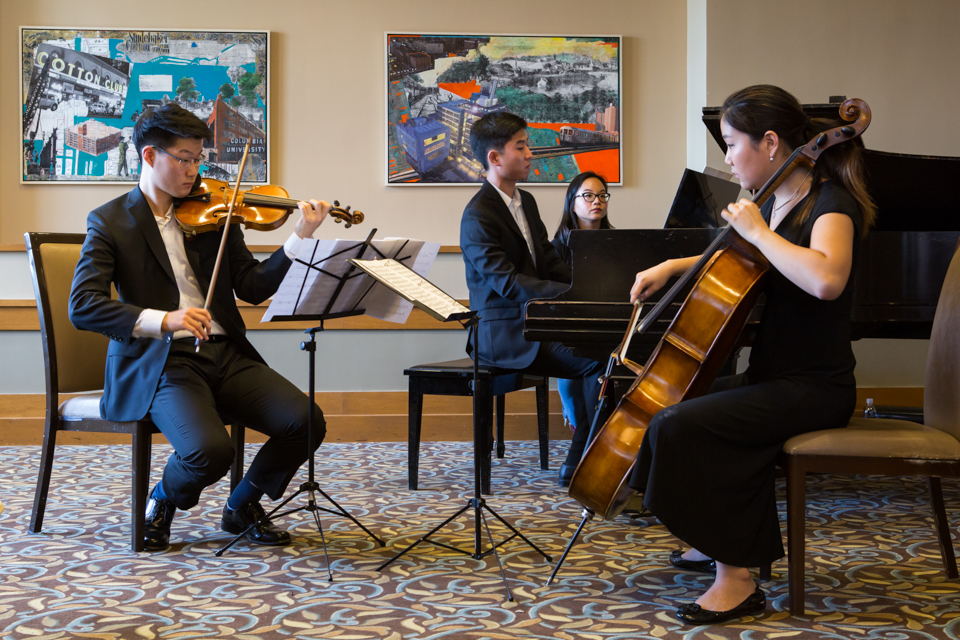 At Mid-Day Music @ Columbia, Columbia Music Performance Program students are given the opportunity to perform in a uniquely intimate space.

There are not many concerts where you can find a four-month-old and a 92-year-old enjoying music side by side. But in the Garden Room at Faculty House every Wednesday at 1 p.m., audience members of all ages gather to listen to students in Columbia’s Music Performance Program perform.

The Faculty House Garden Room was originally used for a concert series that featured non-affiliated students. After Director of the Music Performance Program Magdalena Stern-Baczewska joined the faculty in 2014, however, she and Chair of the Columbia Music Department Susan Boynton found that the lack of performance spaces available for music students could be ameliorated if the music department took over the Faculty House concert series. In 2015, they gained permission to do just that, starting the Mid-Day Music @ Columbia series.

No matter how large the audience is each week, the concerts serve a larger purpose. As Columbia’s music program is not a conservatory-style program, the students in the MPP often crave, yet lack, performance opportunities.

“We have testimonies from students saying that music is what keeps them sane and centered. It is what gives them structure in their lives,” Stern-Baczewska said.

The concerts feature either a small chamber group or a solo performer. Each concert lasts about an hour, and audience numbers range from a smattering of regular attendees to standing-room-only crowds. The performers are the key to publicity for each event, as they are encouraged to invite their friends and family and to advertise for themselves.

The series has been so successful that a new concert series, created with the same structure and goals as the Mid-Day Music series, has been established by the MPP this year at Maison Française called M@MF, which stands for Music at the Maison Francaise.

Cindy Liu, CC ’18 and a pianist who has performed in the Mid-Day Music series, described the experience as a great opportunity to perform for friends and family in an on-campus venue.

“Being part of the [Mid-Day Music concerts] has really made me more comfortable with my own playing,” she said.

The setting of the concerts also allows musicians to become comfortable performing in front of an audience without the pressure of being on a stage. The audience and performers sit on the same level, without any sort of stage or stage lighting separating the two groups. Flautist Annie Nikunen, BC ’20, described the venue as intimate, with the small distance between audience and musicians creating a closer atmosphere.

Along with being a performance opportunity for students, the concert series is also unique for the audience. As the concerts take place around noon, the audience members are usually affiliated with the University, but community members who are free during that time often stop by.

“Even with everything going on in your life, you can take an hour of your day and listen to someone share music with you,” Nikunen said.

It is this wish to share music with a wider audience that really keeps the performers going, as the rehearsal process is often time-consuming, especially on top of a full academic schedule.

But because the performers featured in the series are always students, performers have the flexibility to be more creative with how they present their programs.

Liu, for example, put a tongue-in-cheek spin on a program she played last fall featuring pieces by Scriabin and Prokofiev.

“She introduced the pieces in a very millenial way,” Stern-Baczewska said. “She showed the audience a Snapchat of Scriabin as a cat, and before she played the Prokofiev she put on a Prokofiev T-shirt.”

No one knows if either Scriabin or Prokofiev would have approved of Liu’s embellishments, but the audience appears to enjoy the concerts immensely—over the years, the concert series has gained significant traction and a steady following.

“It has really had a positive impact on the musical landscape of the neighborhood,” Stern-Baczewska said.

For student musicians, the series remains as a unique forum through which to present their talents to the greater community.