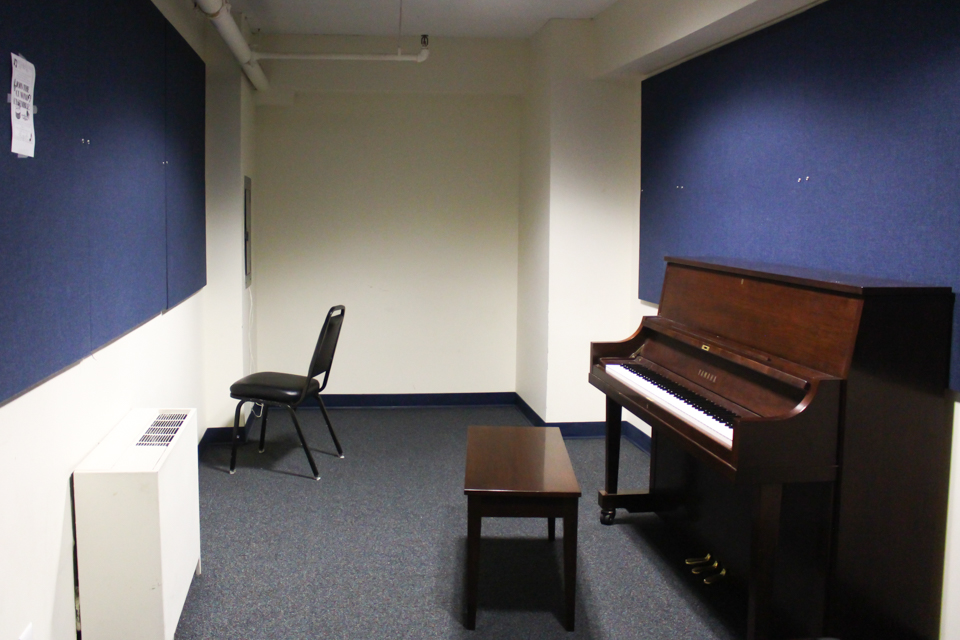 For many student musicians who are not part of a select few University music programs, practice space is difficult--and sometimes impossible--to attain.

In the fall of 2016, first-year Caleb Cook, CC ’20, was eager to join the CU Wind Ensemble as a percussionist.

Cook chose not to pay for lessons. Despite being a percussionist of a university-recognized organization, he was not allowed access to the only drum equipment on campus.

“I really can’t do much. Sometimes if I have just a non-pitch part, then I can do it on my bed, but that’s nonideal,” Cook said.

According to Dr. Magdalena Stern-Baczewska, director of the Music Performance Program, the number of music performances in campus buildings has increased by approximately 75 percent since 2015.

The Music Performance Program is aware of the scarcity of practice space. In a survey it sent out to students in 2016, students cited problems with pianos being frequently out of tune, rooms not being soundproof, music stands being absent from some rooms, and an inability to sign up for practice rooms.

While the Music Performance Program is working to make improvements to problems, including the addition of practice rooms in Carman Hall in 2015 and a new swipe access system for some rooms, the lack of available space for practice is still a difficulty.

“It is not a Columbia problem, the lack of space, but also very much a New York problem,” Stern-Baczewska said.

According to student testimonial, the three practice rooms on the first floor of Carman Hall have no ventilation. Consequently, musicians have to practice with the doors open, making the rooms’ soundproofing useless. Furthermore, the drum practice rooms in Dodge are not soundproof, and piano lab teachers forbid practicing between 10 a.m. and 6 p.m.

In the fall of 2016, Cindy Liu, CC ’18, and Timothy Diovanni, CC ’18, wrote and circulated a petition to University President Lee Bollinger and Provost John Coatsworth asking them to address the lack of proper performance and practice space on campus.

The petition, delivered to the University on Oct. 31, 2016, received over 1,000 signatures from the Columbia community, testimonial from community members, and testimony on the importance of proper performance and practice spaces from professors at fellow Ivy League schools and other prominent universities.

“Our primary goal was to put a face to the issue,” Liu said.

This lack of practice space impacted not only the Columbia community, but also prospective student musicians.

“I almost went to Columbia, but was disheartened by what seemed to be the lack of a flourishing music community,” Megan Chung, a student at Princeton, testified in support of the petition. “[It] appeared that Columbia relied on New York City to provide this. I wanted a community of Columbia students, on the Columbia campus, that had their own respected space at the University.”

Columbia alumni also signed the petition, arguing that Columbia needs to allocate space to show that the university values the arts. Staff members from comparable schools echoed the statement.

“To lack a venue on campus that acts as a proud symbol for student musicians to rally around (and for nonmusicians to enjoy) is to leave a gaping, unmet need in the arts scene on your campus, and by extension the pursuit of a true liberal arts education that Columbia so often espouses,” Andrew Jabara, president of the Stanford Symphony Orchestra Committee, said in his testimony supporting the petition.

After the petition was received by Columbia and Provost Coatsworth met with Liu and Diovanni, the University has made improvements. Starting this semester, Lerner 555 will only be available for reservation by music performance students during the day, and they will be given first priority when scheduling events and rehearsals at night. In addition, two new student music performance series, Music at Maison Française and the Mid-Day Music program at Faculty House, provide more opportunities for students to perform.

“The petition helped the administrators understand the need and quirks about various students using the space at Lerner Hall,” Baczewska said.

However, for frustrated student musicians, the need for further administration and departmental improvement on practice space, especially individual practice space, is essential to stay competitive with fellow schools.

“If the Ivy League wants to be rounded out and brilliant in every subject area, then they need to provide not only the funding, but the space to do that,” Columbia University Orchestra timpanist Michael Coiro, CC ’21, said.