Feminist Zinefest unites artists and activists through craftsmanship at Barnard

Feminist Zinefest unites artists and activists through craftsmanship at Barnard 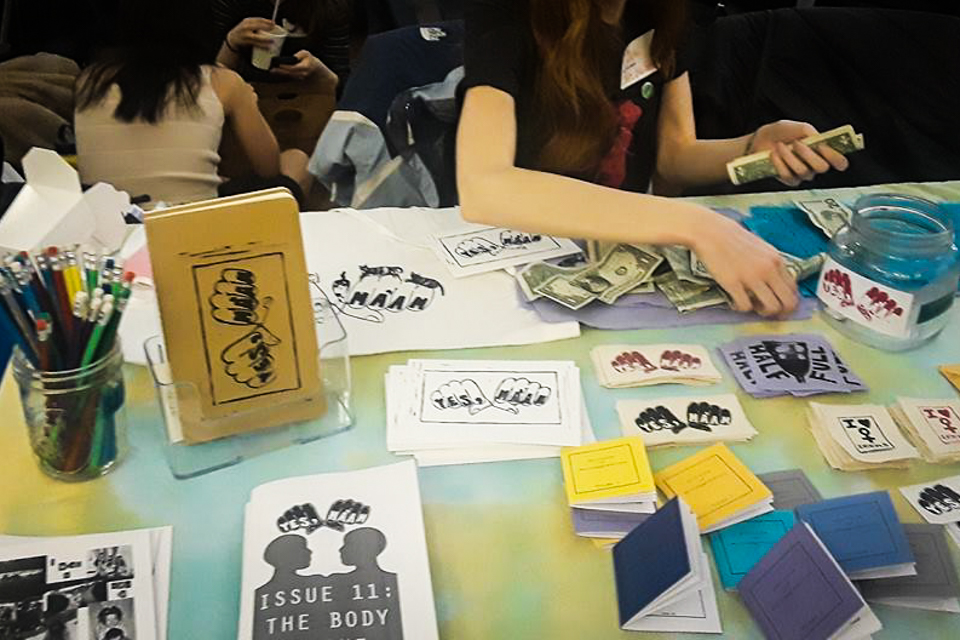 Over 70 booths and an estimated 700 guests attended this year’s festival. The festival, which is unaffiliated with Barnard, made its first appearance at the Brooklyn Commons in 2012. Barnard has been the festival’s venue since 2014 thanks to alumna connections and the efforts of the current Barnard Zine Librarian, Jenna Freedman, who participated in the inaugural festival.

The free event, which advertises itself as an all-ages and trans-positive space, has also served as an inspiration for the Massachusetts Feminist Zinefest, Feminist Zine Fest Pittsburgh, and the Hamilton Feminist Zine Fair.

Sellers and zine makers presented a range of content and products, including zines, patches, pins, and tote bags with their feminist and political inclinations reflected in the craft. While some booths communicated broader feminist messages, others represented specific organizations or causes, such as La Horchata Zine, which focuses on artists with Central American ancestry, and We’re Hir, We’re Queer, a Brazilian-American collective which publishes works primarily by non-male, queer, and transgender people.

One organization present was the Doula Project, a non-profit dedicated to supporting people throughout all stages of their pregnancy. Their first zine—“DIY Doula: Self-Care for Before, During, & After Your Abortion”—was also sold at last year’s festival.

“Zines are a way of creating access to things that aren’t talked about in the media,” Moran said. “They’re inexpensive, you don’t have someone else telling you what you can or can’t say, and they have a history of being political. You are the media with zines, and we actually host our entire zine online as a PDF, because while we sell them and take donations at places like this zinefest, we want people to have as much access as they can.”

Festival organizer Jordan Alam, BC ’13, spoke about what the zinefest looks for in its vendors and the products they will bring.

“On a structural level, we make a curated decision about what we consider a zine, and the other decisions we make are representational based,” Alam said. “How many people of color are we bringing into the space? Do we have trans voices in the space? Do we have space for people who are differently abled, and all of that, just so we have a variety of voices.”

Alam elaborated on where the need for a feminist zinefest stems from, and how themed spaces or art fairs can construct a safe and inclusive community.

“Art fairs are supposed to be open, but they don’t necessarily set up parameters that say, ‘We’re gonna make it safer for folks who identify in a certain way, or who are black and brown folks, et cetera.’ Not to say that we’re not learning in that process, but I think the fact is we set out with an intention,” Alam said.

Festival co-founder Elvis Wolf spoke of the relationship between Feminist Zinefest and Barnard, which has served as its venue for the past five years.

“Barnard being a school that costs over $60,000 to go here is always in tension with something about zines that are non-commercial,” Wolf said. “That alone is a weird tension, and I think people have different feelings about entering a very academic space, depending on their experiences in the past with those spaces. We try to bring something cool here, and I hope that’s how people perceive it, because we aren’t synonymous with Barnard College.”