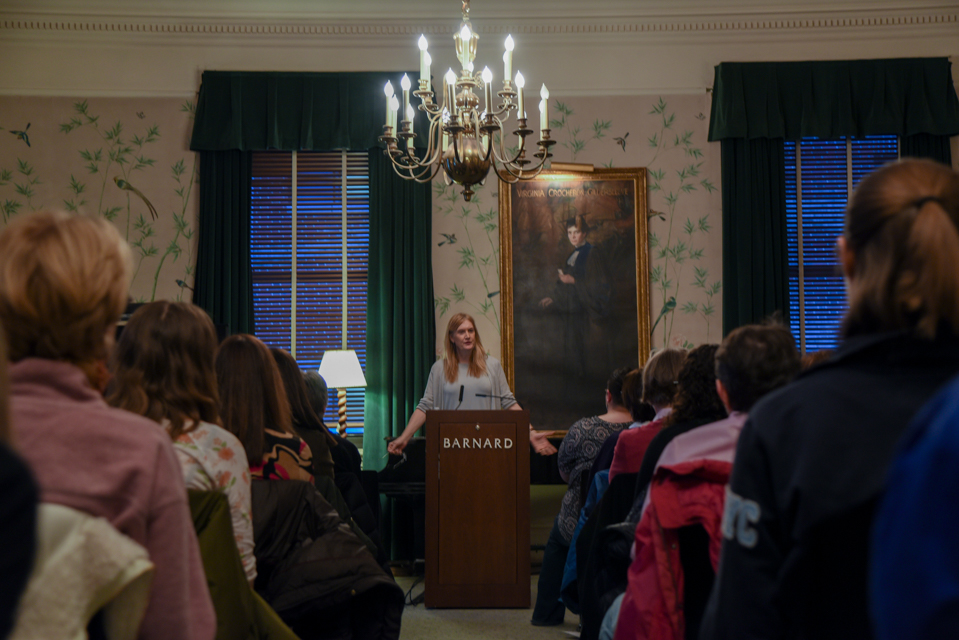 “Love, love, love”: The resonating phrase concluded the original short story by prestigious authors Jennifer Finney Boylan and Mary Gordon at their joint reading, part of the Writers at Barnard series, on Tuesday night. Familial love, love of the self, and even the abuse of love were powerful subjects in these writers’ short stories.

Boylan and Gordon spoke at Sulzberger Parlor, Barnard Hall. Boylan is the Anna Quindlen Writer-in-Residence at Barnard College and a New York Times op-ed contributing writer. Gordon has received a Guggenheim Fellowship and has authored such titles as “There Your Heart Lies” (2017) and “The Liar’s Wife” (2014). Both Boylan and Gordon read segments from original pieces to the audience.

Whereas Boylan’s piece had an autobiographical element that followed a young transgender individual through nighttime adventures, Gordon’s piece narrated the conscience of a young, independent girl visiting an art gallery, who is approached by a charming, mature man.

Boylan’s charismatic performance of her story, “Catastrophic Restoration,” was testament to her inspiring personal narrative of self-discovery.

“[It is] the tale of a woman who had to keep herself hidden lest the world should discover her identity,” Boylan said. “It took me years to discover I wasn’t writing a novel, I was writing a memoir.”

Boylan’s realization of the heavy autobiographical element to her work gave her a different lens through which to view life as a whole. The author cited one of her early professors, John Barth, as defining plot as “the incremental perturbation of an unstable homeostatic system and its catastrophic restoration to a new and complexified equilibrium.”

Despite the convoluted vocabulary Barth deployed in the description, Boylan reframed the imbalances in her life as creating a plot for her writing. Through thinking about her own life as having this progression to a “complexified equilibrium,” Boylan’s work became inherently influenced by her actual life.

“Exposed,” the short story that Gordon read, describes the visit of a young girl to a modern art museum where she meets a charming older man. As the conversation between the girl and man progresses, a haunting sense that the older man is taking advantage of the enchanted younger girl builds suspense in the narrative, climaxing in a rape scene.

“It wasn’t like what she wanted at all. His tongue is inside her mouth. She feels like she can’t breathe,” Gordon read, “He is trying to make her lie down on the couch, but she doesn’t want to lie down. She doesn’t want his body on top of her like this.”

As disturbing and visceral as this description is, Gordon’s writing itself brings the criminal in the story to justice through exposing the rape narrative. Although the young girl never exacts revenge on the rapist in the story, the declamation of Gordon’s piece in a Barnard College auditorium brought to light the stories of many young women who have gone through similar experiences.

Both being professors at the Barnard College English Department, Boylan and Gordon convey the caliber of work Barnard’s creative writing program encourages. While the narratives contrast in their content, they both impressively and intensely empower the personal identities of individuals, one through its significant autobiographical element and the other through metaliterary justice.

Boylan ended her reading describing an agapeic embrace between her and John Barth, her teacher, who encouraged her to fully take hold of her true identity.

“I should have just let go of him then and let him return to his chair,” Boylan read, “But instead I held him in my arms just a little bit longer. That great kind genius of American literature—my teacher—and I thought well, what else would you do? Love, love, love.”