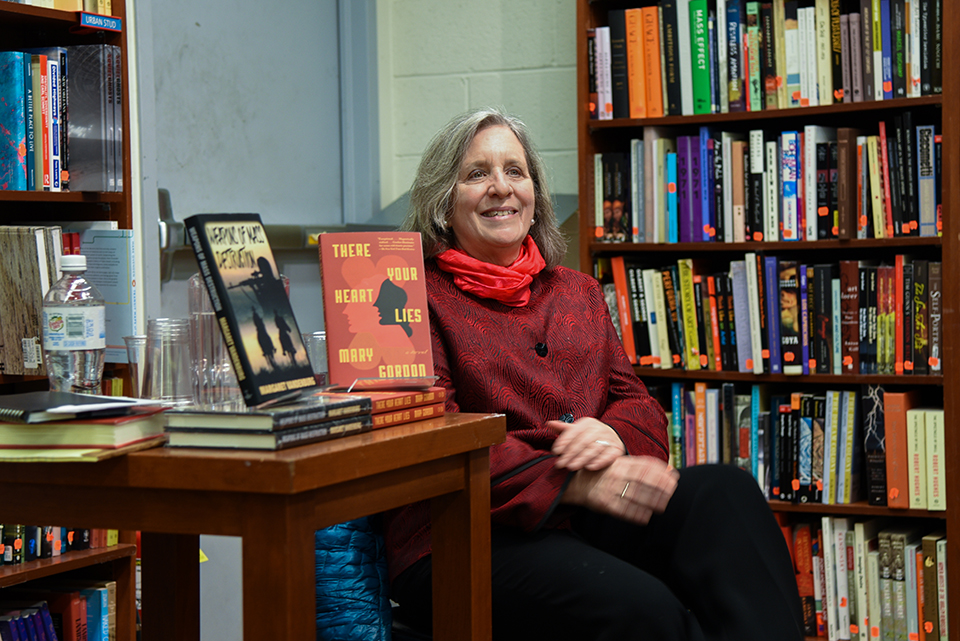 Gordon's newest release, "There Your Heart Lies," confronts issues with Catholicism in both a historical and modern setting.

In front of an eager audience on Book Culture’s second floor this Thursday, one of Barnard’s most prolific authors, Professor Mary Gordon, sat down with fellow Barnard English professor Margaret Vandenburg to talk about Gordon’s latest book, “There Your Heart Lies.”

Gordon’s novel, simultaneously set in 1930s Spain and contemporary Rhode Island, follows the relationship between Marian Taylor and her granddaughter Amelia. It alternates between Marian’s memory of the Spanish Civil War and her last phase of life in Rhode Island.

Known as a Catholic writer, Gordon’s portrayal of the Church and Catholicism has assumed varied lenses over the course of her career. Gordon’s latest work lands squarely on the side of critique.

The novel tells the story of when the Catholic church, along with Benito Mussolini and Adolf Hitler, backed the fascist Francisco Franco in his rise to power in the Spanish Civil War. As a young woman, protagonist Taylor denounces her Catholic identity and moves from the U.S. to Spain to fight with the Republicans against the well-armed fascists for control of the country.

Yet even within this narrative, Gordon’s critique of the Church is complicated by the creation of equally venerated Catholic characters. One Catholic priest who takes it upon himself to listen to hour after hour of confessions of brutalists as an act of sacrifice is the moral pinnacle of the novel.

In Book Culture, searching for a way to explain the strain of “evil” within her own religious tradition, which has been capable of horrors like those of the Spanish Civil War, Gordon drew on theology. She traced the root of much of the Catholic church’s evil and bloodshed to an idea of purity originating from Paul.

Explaining the consequences of such an end, Gordon said, “That desire for purity is a desire to exclude and to punish … At the same time there’s a notion whose source is the gospels, that … you give and give and give.”

Catholicism seems to be the framework through which Gordon understands the mysterious edges of human behavior—the dual human capacity for good and evil.

Vandenburg’s presence across from Gordon, both physically and intellectually, provided opposition to the very basic ideas that shape Gordon’s narrative.

In the course of their conversation, Vandenburg and Gordon came out resolutely on opposite sides of the “evil debate.” Vandenburg stated, “I don’t believe in evil,” and Gordon referenced the mystery of the “appetite for humiliation and harm” as motivation for further inquiry within her book. Though the conversation touched on several other topics, Gordon and Vandenburg’s conversation repeatedly returned to this fissure and lingered on it.

While Gordon’s interest in Catholicism seemed at first representative of a delineation between good and evil in the Catholic tradition, Vandenburg presented an alternate picture. While Gordon’s belief in evil was vindicated by her faith, Vandenburg’s disbelief is congruous with the same faith.

“I’m deeply...Catholic too. And I believe in redemption,” Vandenburg said. “We do these terrible things, but at the heart of it, there’s always a way out.”.

The question of “What is evil?” seemed to evolve through the course of the conversation as the two pontificated on evil’s relevance in present-day America. The conversation was pulled into current politics as the two professors struggled through the implications of the rise of Trump, which became a proxy for ideas of good and evil versus redemption. The two struggled with a common debate of whether to condemn or empathize.

“When I think a critical mass of people in my country thought this was desirable, I have not been able to get over that ... It stains every breath that I take,” Gordon said of the deep chasm wrought by the 2016 election. “The best I can say is that people are stupid. And then it gets a lot worse than that. Which is that they are racist and misogynistic.”

Vandenberg’s reaction abstracted the current political climate, pulling away from the minutiae of Trump’s personality into a larger picture.

“To me, he’s a symptom. See, I don’t think he’s a location, he’s not the site of something. He’s a symptom,” Vandenburg said. “Evil is not a thing. We like to say it’s a thing, and it’s very convenient; it’s a very simple answer for complex injustices that we author. It’s not a site. It’s not a thing. It’s the inability or the hopefully lack of will to deal with things that we could actually untangle.”

One of the most profound questions of the evening was raised not by either academic, but by an audience member. Two rows from the front, a student raised her hand and asked, “I’m curious as to what you think about the possibility of loving the imperfect.”

Following up on her question several minutes later, the student said, “I guess I was just thinking of the Dostoevsky quote that true suffering is not being able to love … I think that one also suffers from being unable to love that which contains evil.”