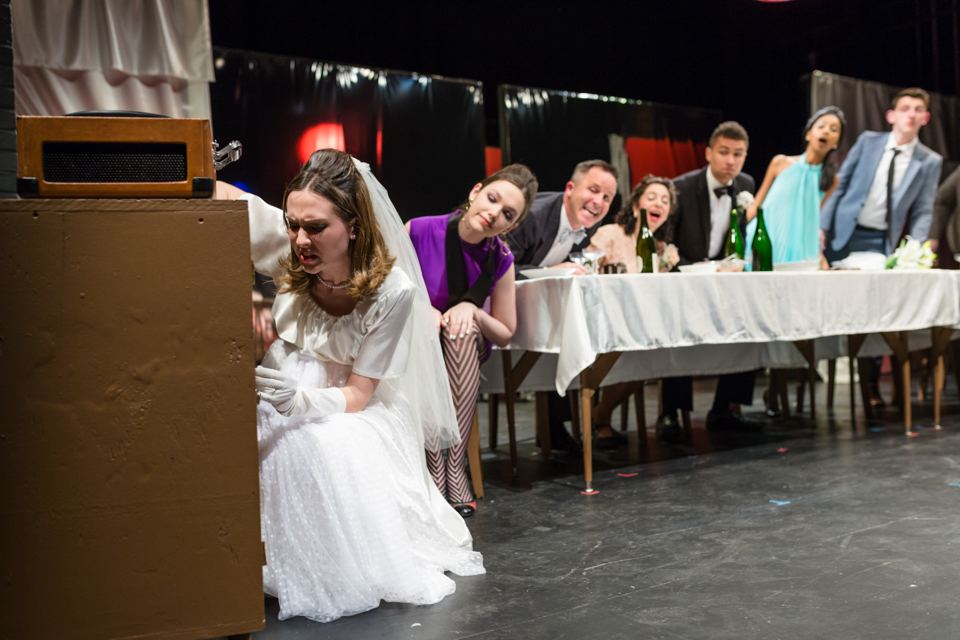 Berke's “A Respectable Wedding” experimented with gender roles within the play's original script, giving a fresh twist to the plot.

Pairing emboldened reds with palliative blues, the first weekend of Barnard’s Senior Thesis Festival was a literal juxtaposition of the comically brash and the calmingly artful with the festival’s two recent directorial offerings. Both were wild in a sense—one delightfully, comically so, the other more artistically avant-garde. However, both directors were certainly wildly successful in their respective theatrical translations of their thesis productions.

The Barnard College Theatre Department presented the first weekend of its Senior Thesis Festival from April 19 to 21 in the Minor Latham Playhouse. The performances, shown in succession, were “A Respectable Wedding” by Bertolt Brecht, translated by Rory Bremner, directed by Britt Berke, BC ’18, and “Hotel Cassiopeia” by Charles L. Mee, directed by Lauren Cannon, BC December ’18.

“I’ve always been a Brecht fan, and I think that he creates really important work, and I was excited to work with this very early piece of his,” Berke said. “He wrote [the play] when he was 19 years old, so I like that when he wrote it, he was… a dumb college kid, just like us.”

“A Respectable Wedding,” or when directly translated from German, “The Petit Bourgeois Wedding,” follows a post-wedding party sitting down for a meal and conversation that progresses throughout the evening. A sort of precursor to the current Broadway hit “The Play that Goes Wrong,” the veil of perfection disintegrates over the course of the performance with the dual collapse of etiquette and the groom’s homemade furniture.

The play was originally written and set in 1919 before Brecht had developed his signature “epic theatre” practice, so Berke worked to, in her words, “Brecht-ify Brecht”—adding elements of alienation, moments of characters breaking the fourth wall, and gestus, with overtly physical performances from the ensemble. And by placing the play in a 1960s setting, Berke was able to contemporize the narrative, spinning it into one of feminist empowerment. By switching the role of “friend” (Chloé Worthington, BC ’18) from male to female, the bride (Julia Dooley, BC ’20), originally wooed by this character’s sex appeal, is instead entranced by a strong, independently minded female figure.

With collectively droll performances by the cast, highlighted by the playful chemistry between Worthington and Dooley, vivid 60s costuming, and comically crumbling set, “A Respectable Wedding” was entirely delectable from head to toe. Simultaneously, the production was aptly modern yet distinctly Brechtian—an orchestrated catastrophe, finely tuned.

Cannon, director of “Hotel Cassiopeia,” is the current president of the Columbia University Players. For her thesis production, she was drawn outside of her directorial comfort zone, experimenting with the atypical.

“Everything I’ve directed before this has been controversial and thought provoking, but is extremely linear and makes a lot of sense and the direction is kind of written on the page,” Cannon said. “And that’s not this play, this play somewhat makes no sense, and is confusing… and I wanted to see what that would be like.”

“Hotel Cassiopeia” certainly embodies the bizarre and the confusing with the interplay of the theatrical, the physical through dance, and the poetic. The play follows Joseph Cornell (Jason Bowen, CC ’21), a 20th-century artist specialized in the creation of boxed collage pieces, inspired typically by female muses. However, in a post-Weinstein and #Metoo world, Cannon struggled with celebrating the story of an artist stripping women of their multidimensional identities by literally and figuratively boxing them into the simple and pure. She then shifted “Hotel” to focus on the stories of the muses themselves, and the personalities of the various female figures Cornell encountered.

“Hotel Cassiopeia” shows the banal, like Cornell’s basement-dwelling life, juxtaposed with the ethereal, twin ballerinas (Sophie Freedman, BC ’20, and Carolyn Friedman, CC ’21) floating across the space, the story revealed through their movement. Although overtly ambiguous, a conglomerate of visual stimulants filled the hollow left by lacking narrative continuity, the dancers utilizing items placed across a shelved backdrop to transform themselves into the personas of Cornell’s various muses, with the help of slickly integrated projections of flowing stars or a shadowed silhouette and exquisite lighting. Though certainly situated in the abstract, Cannon aptly created a feast for the senses with an hour of pleasurable enigma.

Berke and Cannon’s productions, exceedingly impressive showcases of Barnard student prowess in directing, testified to the competitive and coveted nature of spots within the directorial concentration within the Barnard theatre major. After two successful first-weekend presentations, the second festival weekend on April 27 to 28, which will present theses in solo performance and playwriting, is sure to be equally alluring.