Nothing was rotten about KCST’s Hamlet

Nothing was rotten about KCST’s Hamlet 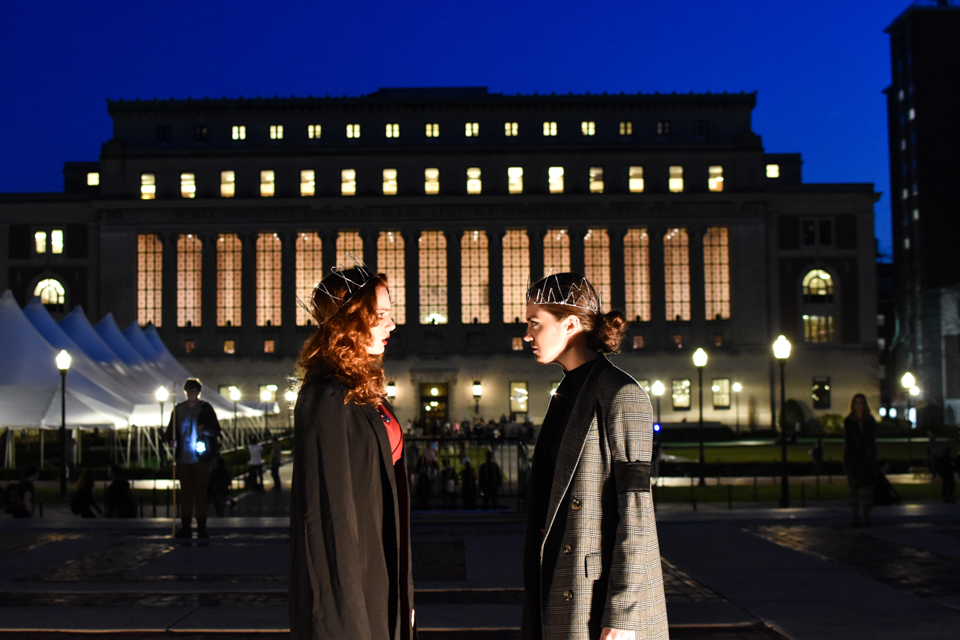 The King’s Crown Shakespeare Troupe’s roaming performance of Hamlet, performed last weekend, was by far the most impressive acting performance Columbia has offered this year—Bailey Coleman, BC’19, should give herself a round of applause for her performance in the leading role. The production was so invigorating that it warranted more than one viewing.

Antonia Georgieva, CC ’18, expertly directed the performance, which moved around Columbia, starting on Low Plaza and stopping at landmarks such as the steps of Earl Hall and the garden brick structure opposite Fayerweather.

From start to finish, the acting was stunning.

Each line that Coleman declared was pointed and weighted with meaning. Even outside in the open air with sirens and fire engines wailing in the background, Coleman’s clarity of diction and pronunciation dominated the mobile stage. Throughout this energetic and animated performance, Coleman had a cheeky spark whilst interacting with other characters. With a wink to the audience or a unscripted kiss with Ophelia, played by Gabrielle Bullard, BC ’18, on Friday and Saturday night, the wittiness of Hamlet the character was embodied in Coleman herself.

Moreover, Coleman’s performance of Hamlet’s soliloquies brought goosebumps to the skin. The suspense she created building up to the infamous ‘To be or not to be’ monologue as she took off her princely crown, lowered herself onto the steps, and brought tears to her eyes epitomised the quality of acting that Coleman brought to the stage. Having seen the Maxine Peake production of Hamlet (2015), Coleman could have confidently taken Peake’s place.

However, the production would certainly not have been as successful without the acting quality rippling throughout the cast.

Alexander Keefe, CC ’20, played Polonius and took to his role with aplomb. Playing the flustered and foolish father can often undercut the sincereness of the actor playing the role, but Keefe maintained Polonius’ moments of dim-wittedness while simultaneously serving his children as a caring father. After Hamlet declared that Ophelia should get herself to a nunnery and exited the scene, Keefe descended from his hiding position on Earl Hall steps and gave his daughter a heartwarming and reassuring embrace. Keefe’s sentimentality for his children was key to his brilliant performance.

Another pillar in the cast was Bullard, who played Ophelia. Her tearful interactions with Hamlet and her air of innocence emphasized the abandonment and loneliness Ophelia experiences in Shakespeare’s tragedy. Even after her death, the choice for Ophelia’s corpse to lie face-up on the grass outside Uris Hall, directly in front of the moving audience, upheld the haunting memory of the suicidal Ophelia past her exit from the script.

Credit should also be doted lavishly upon the regal duo of King Claudius, played by William Cagle, CC ’20, and Queen Gertrude, played by Grace Hargis, BC ’20. As characters subsumed by their monastic identities, Cagle and Hargis upheld their regality and sternness before letting it crumble like the State of Denmark itself. Cagle’s soliloquy admitting to the murder of his brother saw him drop to his knees as he cradled his penance rosary in his right hand, humbling himself in his guilt.

In addition to the stellar acting performances, the ensemble and production team created the world of Hamlet expertly as they guided the audience from stage to stage. When they moved from the stage centered around the eastern fountain on Low Plaza to the lawn outside Philosophy, the ensemble chanted “Come” rhythmically with outstretched arms, beckoning the audience further into the world of Hamlet. Moments such as these helped build the mystery and suspense within the familiar plot. The enthusiasm of the ensemble and their organization in leading the spectators gave the performance the professional feel that the acting and direction deserved.

The King’s Crown Shakespeare Troupe deserves the crown in its acronym for this performance of Hamlet. Truly, the show was a masterpiece that deserves a plethora of praise. I am uncertain as to whether I will see a better performance of this Shakespearean tragedy in the rest of my lifetime.