Julia Bacha, GS ’03, tells of the First Intifada in her new film “Naila and the Uprising”

Julia Bacha, GS ’03, tells of the First Intifada in her new film “Naila and the Uprising” 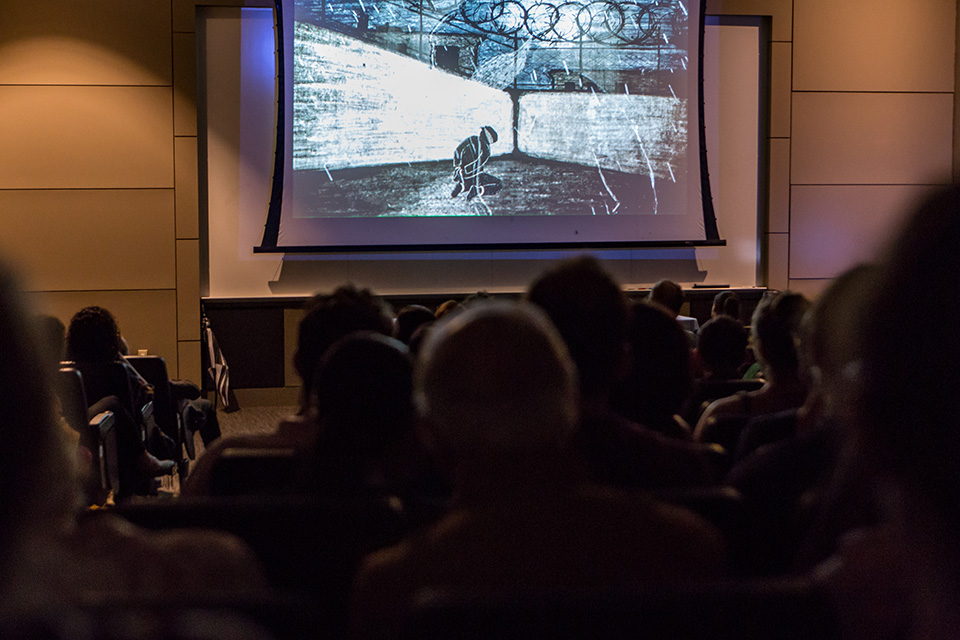 Bacha detailed the life of Naila, a Palestinian activist, through animation, news footage, interviews, and reenactments in her documentary.

Students, faculty, and community members filled Schapiro Hall’s Davis Auditorium on a rainy Wednesday evening last week to watch the new documentary from Julia Bacha, GS ’03, “Naila and the Uprising,” followed by a discussion with the director. The film, co-hosted by the Columbia Center for Palestine Studies and the Institute for the Research on Women, Gender, and Sexuality, recounts Palestine’s First Intifada through the story of political and women’s rights activist Naila Ayesh.

Bacha combined animation, news footage, interviews, and reenactments to trace Naila’s life from her early childhood to her activist adulthood. The film is packed with historical and contextual facts while emphasizing the personal and often heartbreaking struggle fought by Naila, her family, and colleagues during the First Intifada, which began in 1987 and took place throughout the West Bank and Gaza in protest against Israeli occupation and military presence. The film depicts an uprising that was was almost exclusively organized by citizens and was largely non-violent on the part of the Palestinians. Through political pamphlets, publications and organized protests, the citizens of Palestine featured in the film expressed their demands in negotiating the removal of Israeli forces.

Naila suffered a miscarriage during her first arrest in 1986, was separated for over two years from her husband after his deportation, and spent six months in prison with her infant son. Despite these and many other tragedies, the documentary depicted Naila remaining committed to organizing and mobilizing the men and women of Palestine to stand firmly against the Israeli occupation. Under close watch by Israeli military, Naila would carry flyers from door to door with her young son strapped to her back, hiding the papers within sacks of bread so as not to give away her motivations.

People of all ages, genders and professions participated in the uprising, a fact that Bacha stressed to the audience during her discussion with modern Arab studies professor Rashid Khalidi.

“There was something to be tremendously proud of: Palestinians to this day talk about it as a moment when they felt dignity. They felt like they actually could stand up, be proud of this mass uprising they had created,” Bacha said. “They were doing all voluntary work, and the community was operating all on the same frequency.”

This populist uprising makes for an inspirational story, but Bacha pointed out the difficulties of working with such an underground movement.

“The reality is that this was a clandestine movement that by and large couldn’t document itself. So there was very little footage. The women in particular were largely invisible in the media,” Bacha said.

It was in fact the Palestinian women who powered much of the First Intifada, as the documentary revealed. Bacha credited this to the number of men who were imprisoned or deported, leaving the women to organize and execute the peaceful uprising.

Through local committees and unions, the women of Palestine kept basic practices such as medical care and schooling available to the population despite the Israeli government’s attempts to shut these services down.

Bacha ended the film after the signing of the 1993 Oslo Accords between Israel and the Palestine Liberation Organization. The film notes that the Accords felt like a betrayal to Naila and many members of the uprising who felt the citizens had not been consulted about what was to be included in the peace talks. Many of the community groups and unions that formed during the first Intifada have disappeared in the years since, but the message of citizens exercising their right to protest struck a chord with the film’s audience.

“What we have seen around the world, but certainly in the United States where we’ve been screening the film, is that people who would otherwise be closed to the narrative of the film are incredibly touched,” Bacha said. “Often people feel less threatened when an event happened in the past. They can use the film to examine the present with more context.”

Julia Bacha Columbia Center for Palestine Studies Institute for the Research on Women, Gender, and Sexuality