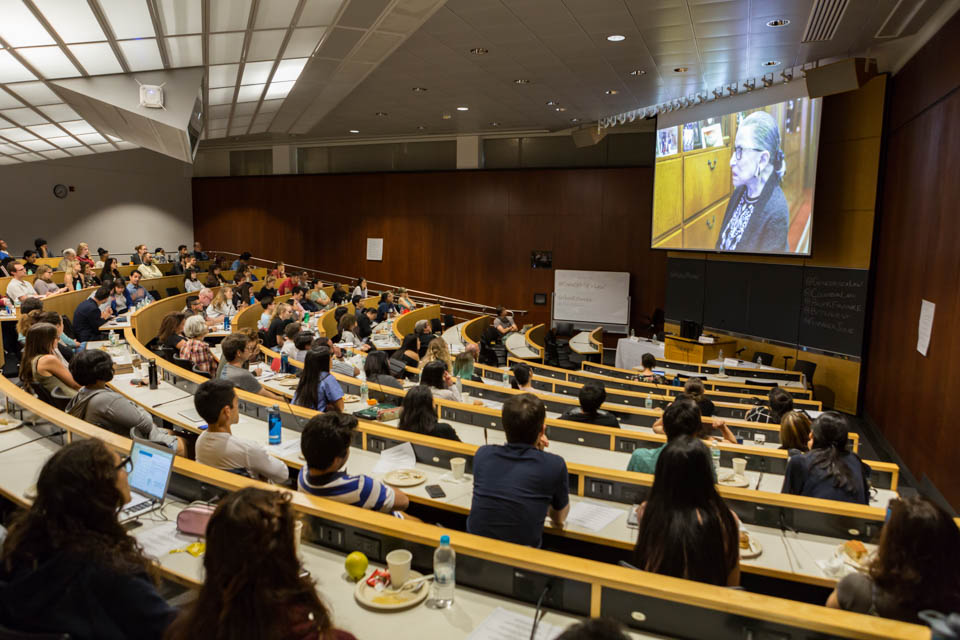 A screening at the Law School of the documentary "RBG" was accompanied with a panel featuring the director, producer, and Ginsberg's daughter and granddaughter.

In a world ruled by questionable politics, one justice perseveres with her dissenting opinions—the notorious Ruth Bader Ginsburg, Law ’59.

On the evening of Monday, Sept. 17—Constitution Day—the Law School held a screening and discussion panel of the recent Magnolia Pictures documentary release, RBG. This panel featured the co-producers and co-directors of the film, as well as the daughter and granddaughter of RBG. The film was first screened at the Sundance Film Festival in January 2018 and has already won best documentary at the Sarasota and Wisconsin Film Festivals.

“We think this is a film about constitutional law,” producer and co-director Julie Cohen said. “And I don’t just say that on Constitution Day. It is a showing for an audience of legal scholars, but really more for the point, we made it with the lay audience in mind to remind people the importance of the constitution as a living, breathing, extremely relevant document.”

The documentary weaves Ginsburg’s legal and personal life together in both a serious and lighthearted way—rather like her popular nickname. By examining her ongoing mission to eradicate gender and sex discrimination from the justice system, the film explains how the outcome of each case became a unique piece of the puzzle in her larger vision.

Fresh out of Columbia Law School, RBG was rejected from every law firm she applied to because of her gender. Through the ACLU, however, she took on her first case as an amica curiae—fighting for the housing allowance of a female U.S. Air Force pilot. The pilot, Sharron Frontiero, approached Ginsburg believing that the dispute was the result of a clerical error and that there would be an easy solution. Little did Frontiero know that her case, which she lost in an Alabama court, would be taken up by the Supreme Court.

RBG had to capture the experience of being a second-class citizen for a male-dominated court. She had to convince the justices that gender discrimination actually existed. While Frontiero won her benefits, RBG failed on review to overturn the law. Only four out of five justices signed on to overturn it.

“The heart of the film was her legal work in the 1970s as a litigator on behalf of women’s rights,” said co-director Betsy West, a professor at the Journalism School. “And obviously when we get to the Supreme Court, we understand there are certain things a sitting justice is not going to discuss.”

Weinberger v. Wiesenfeld was the next significant case RBG took on in 1975, and it cleverly examined gender discrimination from a distinct angle. After his wife passed, Mr. Wiesenfeld was denied child benefits on the grounds that he was a father and not a mother. RBG argued that the Social Security Act discriminated against Mr. Wiesenfeld based on his gender. The Supreme Court unanimously voted in favor of RBG’s arguments and overturned Section 402(g) of the Act, adding another piece of the puzzle to the vision.

While depicting her legal successes, the film also explores the love story of Ruth and Martin Ginsburg, her former husband. Starting with a blind date, the documentary affectionately brings out the flourishing dynamic between the couple, with Marty being more outgoing and Ruth more contemplative.

“We brought in fun, funny, and deeply romantic and personal elements of a human life, integrating that with the larger story of the constitution,” Cohen said.

Panelist Clara Spera, granddaughter of RBG and law clerk for the U.S. Court of Appeals, was hardly three years old when RBG was nominated for the Supreme Court Justice position in 1993. During Spera’s legal education, RBG’s fame exploded, establishing her as a cultural icon.

“I’d walk down the hall, and there would be people with pictures of my grandmother on their shirts,” Spera said. “It was very weird—but it also instilled a sense of pride.”

While it was clear from the documentary that RBG cannot particularly be described as gregarious, the Supreme Court justice has taken to her fan name—The Notorious RBG—with style and aplomb. Using footage taken from a recent interview, the documentary revealed how she felt about the nickname.

“It was a rapper—the Notorious B.I.G.—and why should I feel uncomfortable?” RBG said. “We have a lot in common.”

With her youthful fan base ever growing—accelerated by her passion for providing dissenting opinions against the current president—RBG feels her and Biggie have more in common than just being born in Brooklyn.

Cohen and West have set the ball rolling and on Dec. 25, the biographical drama “On the Basis of Sex” will be released, featuring Felicity Jones and Armie Hammer. It is set to tell an even more cinematic story of RBG’s first several cases.