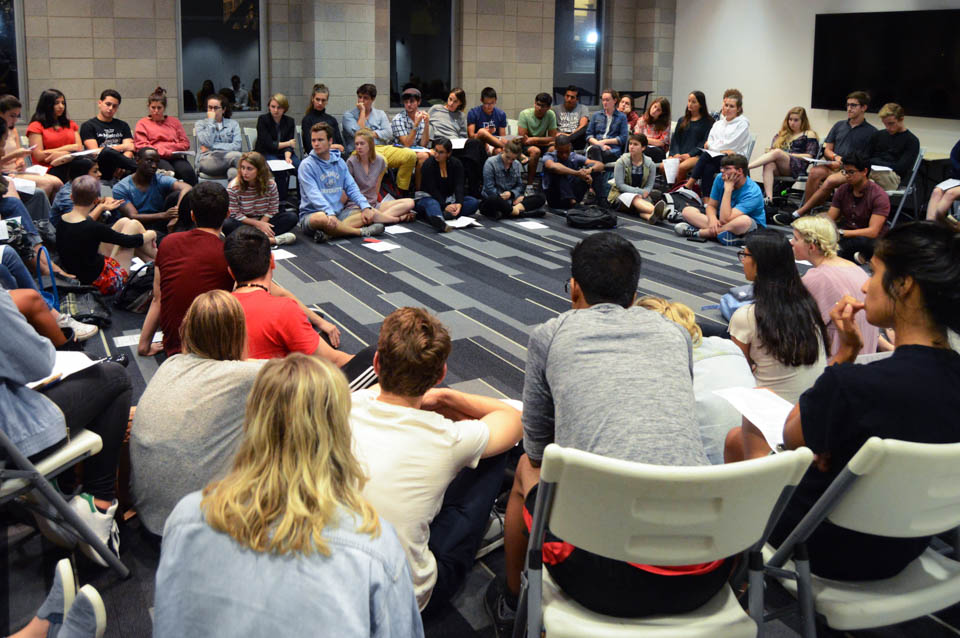 Tuesday's forum, hosted by the Roosevelt Institute, featured an open conversation about the perils of fast fashion.

Students gathered at Lerner Hall on Tuesday evening to participate in Columbia’s chapter of the Roosevelt Institute’s first open discussion of the year, which focused on the global impact of the fast fashion market.

In the open forum, the progressive think tank addressed issues such as safety and wages of workers in countries such as Bangladesh and Pakistan, international property violations, and waste produced by American consumers. The conversation was moderated by Roosevelt’s Director of Economic Development Cameron Davis, CC ’19.

“Fast fashion is a microcosm of a series of really interesting broader questions,” Davis said. “Things like trade, sustainability, and international relations are all scary and big topics that even I have trouble discussing, and [that] I think a lot of people feel overwhelmed by. But everyone wears clothes and has been to Zara, or knows someone who’s been to Zara. It’s a much more tangible conversation to have.”

Of particular interest among students was the American consumer’s ability to self-regulate the impulse to purchase on-trend clothing at the accessible price points of stores like Zara, Forever 21, and H&M. The room was split on whether consumer guilt campaigns, made to highlight labor violations, actually shift the mentalities of low-income Americans, who often depend on fast fashion for basic clothing necessities.

An additional point addressed was the American savior complex at the core of the sentiment behind intervening in countries that produce our clothes, and whether that complex can be positively channeled into consumer guilt that actually creates change.

“I don’t think it’s a particularly good idea to place the guilt on the consumer with the idea that we can all just shop at thrift stores,” attendee Caravaggio Caniglia, CC ’19, said. “If being Catholic has taught me anything, it’s that guilt doesn’t really work. We need to hit companies and countries that abuse workers at a blanket level which will impact how consumers buy clothes without necessarily implicating the consumer’s moral judgment.”

Although the conversation mainly focused on international policy, its occurrence only days after the close of New York Fashion Week—which ended on Sept. 14—highlighted the topic's relevance at the local level.

“It wasn’t necessarily a specific plan to time it near New York Fashion Week, but I think a lot of it was linked to a culture in which fashion is a big deal in New York,” Davis said. “But even more broadly outside of New York, just being at college and people being very cost-conscious is a big thing.”