Kingsmen look back on over 70 years of history at Columbia

Kingsmen look back on over 70 years of history at Columbia 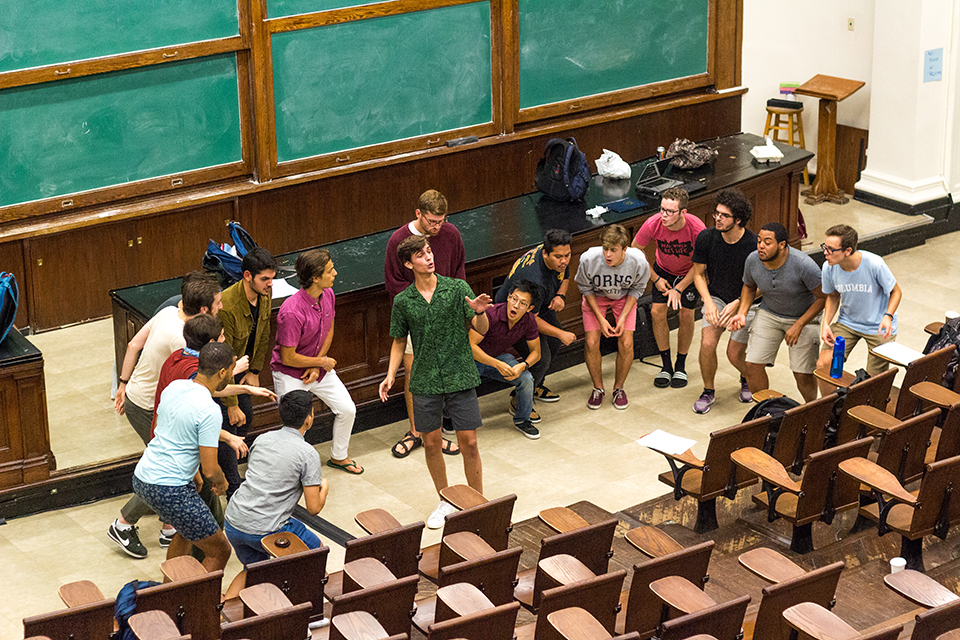 The Columbia Kingsmen recently celebrated their 70th anniversary and released their seventh studio album as a group.

Known for their blue jackets and carefully-constructed doo-wop melodies, the Columbia Kingsmen strike a distinctive picture as a staple of Columbia’s a cappella community. Now, with over 70 years behind them, the group can both look back on a celebrated history and consider the ways they continue the legacy they’ve inherited.

The Kingsmen formed when then-University President Dwight D. Eisenhower made a special request for a group to sing at the 1948 Homecoming ceremony. The group evidently found success early, as Eisenhower told them after their performance at a 1951 football game, “If you men can get 2,000 others singing with that spirit, I’ll personally pin a medal on each of you.”

In the 70 years since their founding, the Kingsmen have carved out a distinguished legacy, performing everywhere from Carnegie Hall to The Ed Sullivan Show. They’ve embarked on numerous international tours and produced such notable alumni as famed singer-songwriter Art Garfunkel and ’70s doo-wop revival band Sha Na Na. The formation of this band, in fact, resulted in the Kingsmen’s only period of inactivity, with 12 members splitting from the group in 1969 to perform at Woodstock to open for Jimi Hendrix. Following this mass exodus, the group disbanded, not officially reforming until 1982.

Putting this gap aside, it’s this long legacy that, as the Kingsmen’s own members note, has brought the group much of its success.

“One of the things … that has elevated our presence on campus is our age,” the Kingsmen’s current business manager, Will Connell, CC ’19, said. “A cappella started to really become a thing that colleges and college groups were trying to do much more often in the ’90s and 2000s than they ever had before. The fact that the Kingsmen had been operating for so long is one of the things that has set us apart, just having that longer tradition than anyone else.”

As former president Jack Guzè, CC ’19, explained, “There was this resurgence in the 90s and 2000s, but there was also this first wave of college a cappella in the ’40s and ’50s, and that's when you have Kingsmen at Columbia, Beelzebubs at Tufts, and Whiffenpoofs at Yale. They were all from that original era. And I think having that sort of history is something a little unique to Kingsmen.”

Surprisingly, one part of the Kingsmen’s reputation that has only recently emerged are the team’s distinctive blue jackets.

Though the group began with a similar blue uniform, “In the ’90s,” Connell said, “they changed to red blazers, which was supposed to be this ironic harkening back to the smoking jackets that the founding fathers of doo-wop all wore. But the routine was, if you got into the group, you had to go to the Lower East Side or somewhere in Brooklyn and buy the cheapest red blazer you could find. So everybody wore these horrible red jackets. Some of them were snakeskin leather, some were cotton, some were 60 years old and smelled like smoke.”

Four years ago, the group finally accepted that their uniform might have some issues and switched to a standard red blazer. But this change came with its own problems. As Connell said, “At my freshman Homecoming, we were playing Penn and somebody in the front row threw a beer at me and shouted, 'Get out of here, fucking Penn. Quakers, fuck you.' And we were like, 'What? We're Columbia. We're the Kingsmen.' And they said, 'Why are you wearing red then?' And we all thought, 'Hey, yeah … that's a good point.’”

The switch to the blue blazer came when, following a performance at an alumni-organized Columbia fundraiser, an alumnus offered an anonymous $10,000 donation for new uniforms.

“Four years ago,” Connell said, “we were wearing these awful thrift shop blazers––now we have custom-made, insane blazers. If you look closely, the buttons are metal engraved with the Kingsmen ‘K,’ the insides are all lined with our logo’ they have each of our individual names inscribed on the inside. We’re all very grateful.”

Today, Kingsmen membership entails six hours of rehearsal a week, along with three to four road trips and two major concerts per semester––not to mention the commitment of Song-o-Grams come Valentine’s Day.

But even with the amount of time required, as current president Austin Dean, CC ’20, said, “I would never describe Kingsmen as something I have to do, because we all agree that Kingsmen is really one of the defining parts of my college experience, and it’s just kind of hard to imagine college without Kingsmen. So yes, it is a big time commitment and all that, but it's also fun and just a great community to be a part of.”

Last spring, the Kingsmen recorded a studio album, “Public or Private,” the seventh in their history. While the group claims that they aren’t releasing another album anytime soon, they’ll continue to fulfill Eisenhower’s request in the meantime, donning their blue jackets to cheer Columbia on against Dartmouth at this year’s Homecoming.