“The Other Side” presents an imperative feminist narrative, though lacking tonal cohesion

“The Other Side” presents an imperative feminist narrative, though lacking tonal cohesion 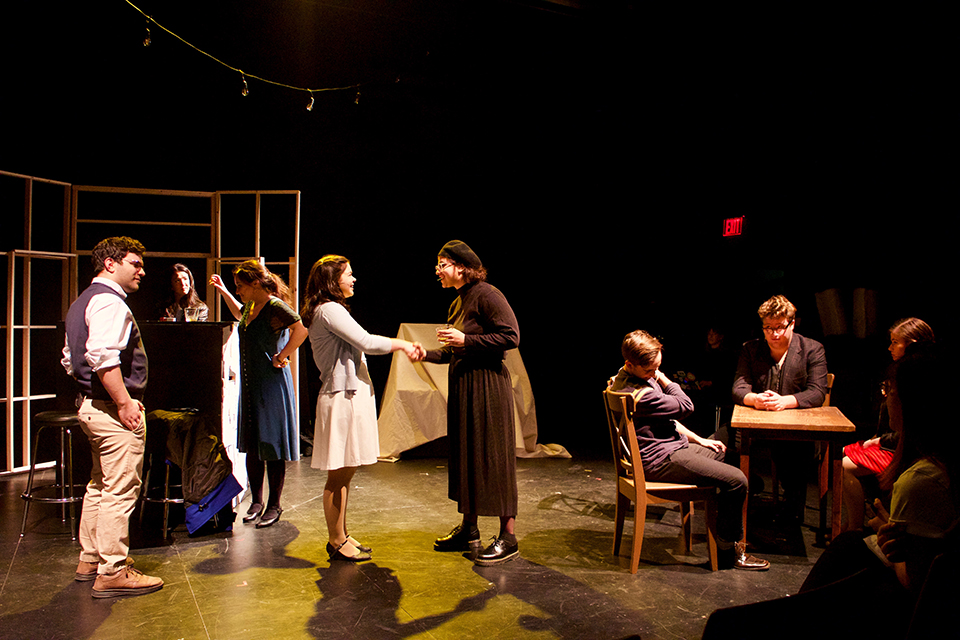 NOMAD's "The Other Side" focused on the forgotten female poets of the Beat Generation.

Elise Cowen, a Beat poet you have possibly never heard of, writhes on the floor, bathed in red light, hair tangled tightly in her fingers, agonized. Through the lens of student playwright Eden Arielle Gordon, BC ’19, this is the effect of the American Dream on a woman. Her new musical, “The Other Side,” aptly brings focus to forgotten female Beat poets—a necessary and important storyline to highlight—yet fails in providing a tonally cohesive and in-depth narrative.

NOMADS’ “The Other Side,” the original musical written by Gordon, played in the Glicker Milstein Theatre from Oct. 25-27. The show featured Sal Volpe, CC ’19, in his directorial debut. Volpe described the show as a poetic drama.

The musical was based on Joyce Johnson’s memoir “Minor Characters,” which chronicles a fragment of the Johnson’s (portrayed by Taylor Faires-Cordova, BC ’19) life, beginning with her time as a Barnard student, then as Jack Kerouac's beau, then poet herself, at the height of the Beat Generation’s emergence.

All of the typical Beat characters appear in intermixed appearance, in what Gordon refers to as a “tangle of mythologies”: Allen Ginsberg (Adam Glusker, CC ’21), the famed “Howl” poet in his explorative stages of both his work and his sexuality; Jack Kerouac (Jackson Wylder, CC ’21), as the “On the Road” writer conceived his seminal work; and Elise Cowen (Daisy Mayer, BC ’22), Johnson’s best friend and fellow poet. All of these figures went to Barnard and Columbia, in fact, before spiraling off into the greater New York City literary landscape, where they gained their legendary notoriety.

Gordon’s musical focuses on this concept of notoriety, and the comparable lack thereof between female and male poets of this time. Ginsberg, Kerouac, and other male beat poets achieved prominent infamy, leaning into narratives of wayward wanderings and nomadic natures, tied only to their words. Females attempting the same wouldn’t be honored with the same revered title of “rouge,” but, instead, were designated untethered or simply crazy. So, in the famed Beat poet circle, women were assistants, per se: emotional reliances, typists, cooks, and cleaners, restrained to their allocated segment of the American Dream.

Johnson and Cowen were the dual forefronts of this narrative, aided often by the ghostly presence of poet Diane Di Prima (Elli Furukawa, BC ’20). This character often stood to the side, judging male ignorance with pointed stares. However, her presence was perplexing, her spectral designation bizarre, as Di Prima remains alive today.

Mayer as Cowen skillfully portrayed an actualized representation of the musical’s themes—the tragic female version of the American Dream. Her deterioration from sprightly adventurist to detached, tortured soul garnered painful resonance. Faires-Cordova as Johnson was equally skillful, her vocal talent clearly apparent, but the character of Johnson was less provocative, leaving one desiring deeper complexity and poetics to intertwine within her narrative.

Ironically, as the story focuses on unwarranted male dominance over the female voice, this is mirrored within performance: Though female roles are aptly performed, the real interest lies within the stories of the leading males. Glusker as Ginsberg was commanding, fluting between lyrical ponderings, romantic confusion, and a suffocating self-assuredness. His lover, Pefter, played by Rafael Lippert, CC ’21, was equally entrancing with his naive poetics and soft chemistry with Ginsberg. Wylder’s Kerouac was suavely captivating yet irritatingly indecisive, compelling auxiliary compassion for Johnson through his lack of compassion.

Their characterizations were arresting, aptly answering Gordon’s thematic call. These men are alluring, yes, but painfully so, their smothering egoism substantiating the lack of empathy towards their female partners.

The quality of the music was inconsistent: Brighter tunes interspersed throughout the first act were well-conceived, but repeatedly were metaphorically transparent and tonally discordant with the often emotional subject matter. Vibrant orchestrations often seemed to stifle Cowen or Johnson’s building traumas, not aided by unfortunate interspersed audio issues.

However, bright tones were intermittently successful when paired with cynical parody. In “Shoot Up,” a sort of anti-lover’s duet, Joan Vollmer, Aliza Ducnuigeen, BC ’21, twirls around the stage alongside female compatriots. She tempts her husband and poet William S. Burroughs (Spencer Tilghman, CC ’19), to “be a big man” and shoot her with his gun, which hangs limply by his side. His face is daunting in its desolation, the underscore of upbeat melodies enhancing the palpably disturbing nature of this encounter.

Poignancy was best realized through subdued and sensitive numbers that coalesced in the play’s later moments. “Open Your Mind,” led by Ginsberg, was painfully ironic but especially resonant, and “Loba Rising” was pleasantly conclusive as a muted yet stirring final number.

The drama was best executed when poetics were palpable: dialogue transforming into the lyrical, quoted excerpts of Eliot, Carroll, or Blake, poetry handed out to audience members, or scribbled drafts draped from lights hung above the stage. Through these words, tangible or intangible, the musical accessed its obviously needed (given the subject matter) poetic core and flourished in a tonally graceful and more deeply expressive dynamic. Most times, however, text foundered in cliche, ironically blunt for an art form known for metaphor.

Johnson, Cowen, and Di Prima’s story, as Gordon suggests, certainly needs to be driven further to the forefront—this much is assured. However, their personas desperately needed deeper characterization comparable to their male counterparts, and the narrative an injection of heightened poetics through language and an increase of a pensively subdued and emotive musical performance.

NOMADS The Other Side Beat Poets