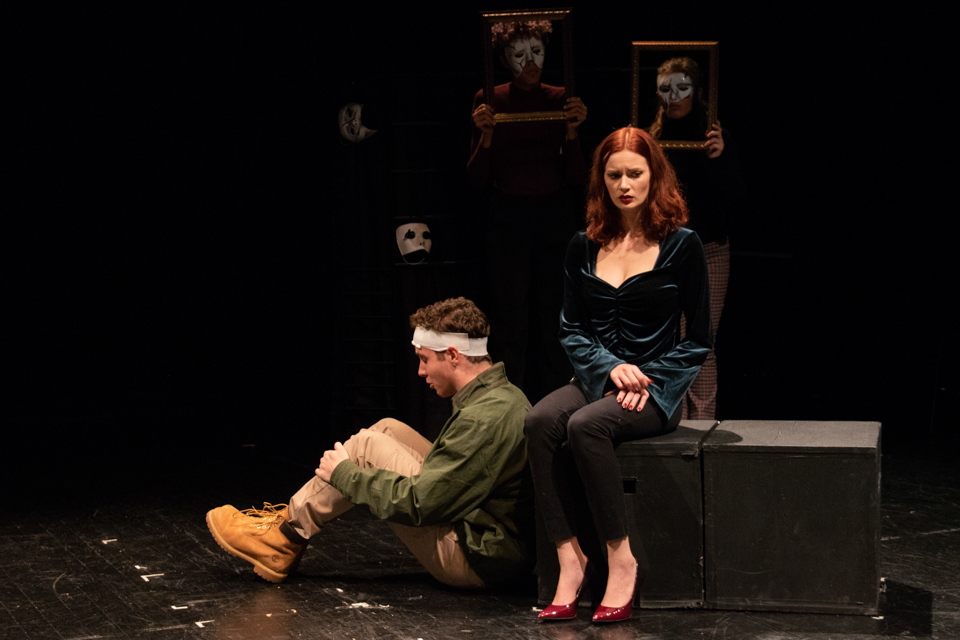 King’s Crown Shakespeare Troupe performed an abridged production of Eugene O’Neill’s “Mourning Becomes Electra” last weekend, a turn of the century retelling of Aeschylus’ classic play the “Oresteia,” that manifests grief in the characters and the space that they occupy.

The show was performed in Lerner Black Box Theater from October 25 through 27, featuring a full cast and chorus. This abridged version focused on the second section of the three-part original play, with an additional introductory scene.

The first half of the production established both a masked chorus who interact with the main cast and stage, and a Freudian dynamic between Orin and his mother Christine. This suggestively incestuous relationship was the driving plot until Orin learned of the cause of death of his father, Ezra Manning. Ezra was portrayed as a corpse by Jason Bowen, CC ’21, who also played Adam Brant, the lover of Christine who helps to plot Ezra’s murder.

A masked chorus, played by Carolina Teson, CC ’21, Cecelia Morrow, CC ’21, and Grace Geurin-Henley, CC ’20, haunted the main cast. They did not represent any recent ghosts of war, but the legacy of grief that is repeated, emphasized by the opening scene. The death of Ezra is not conducted by the actors, but by the chorus, disassociating death from the present and suggesting a ghostly repetition of death and haunting.

This is further accentuated by the usage of the chorus as dancers enacting the past. This occured twice, first when Christine recounted how she fell in love with Ezra, and then again when Orin tells of his first kill in war. There is a marked physicality to the chorus throughout the show, which makes it especially frustrating, given how underutilized they were.

One scene in particular featured them holding picture frames and staring at the characters in the house as they argued over the death. While their presence on the stage was notable, they didn’t do much besides very occasionally leaning in to listen dramatically. Outside of the scenes of Orin’s first kill and Christine falling in love, the chorus lacked a sense of motion and vitality, and instead of haunting the stage, they were lost to the background.

Part of what drew attention from the chorus was Meriam as Lavinia. Her performance was simply outstanding, by far one of the best of the cast. She was living the part, giving organic and emotional responses to everything she encountered, becoming the embodiment of grief and the desire for revenge. She made every interaction she had come to life, even without a lot of support from Multedo.

Multedo gave his second stage performance as Orin, and unfortunately it showed, with his portrayal of the character often feeling more like a Nicolas Cage impression than someone who has experienced a death in the family. Overall, he conveyed three emotions—ballistic anger, uncontrollable sobbing, and an overt affection for his mother. Instead of organic transitions between these states, Multedo simply jerked between them, giving the viewer whiplash as they tried to follow him.

Hargis as Christine was much more varied in her performance, stumbling sometimes but emboding her delightfully malicious character in manipulative arguments with Meriam. Her interactions with Multedo were much less realistic, but whether that was due to Multedo’s inexperience or the strange Oedipus complex between them is uncertain.

The second half of the play had more substance. Introducing the section was the Chantyman, played by Mark Pierce, CC ’20, who sang, danced, and fell over himself, sometimes almost into the audience, a character drunk on grief as much as whiskey.

Pierce’s performance was excellent, providing comic relief before cutting back to the themes of the play. He mused over the loss of Abraham Lincoln and Ezra Manning, and ominously left singing “They says I hangs for money / Oh, hang, boys, hang / They say I hanged my mother / Oh hang, boys, hang,” a foreshadowing call to the deaths soon to follow his departure.

Soon after his exit was the death of Christine’s lover, Adam. Bowen was functional in his performance but stiff at times, feeling like he hadn’t settled into his performance.

After hearing news of his death, Hargis gave an excellent sobbing performance as Christine before her character decides to end her own life, continuing the cycle of grief that haunts our characters.

“Mourning Becomes Electra” was a great experience to watch, but it was held-back brilliance. Outside of Meriam and Pierce, the acting was less than enthralling. The masked chorus gave itself physically to the space, but not always as was fully promised. Regardless, upon leaving, the audience was haunted by what they had seen, bringing the ghost of Eugene O’Neill into the 21st century.