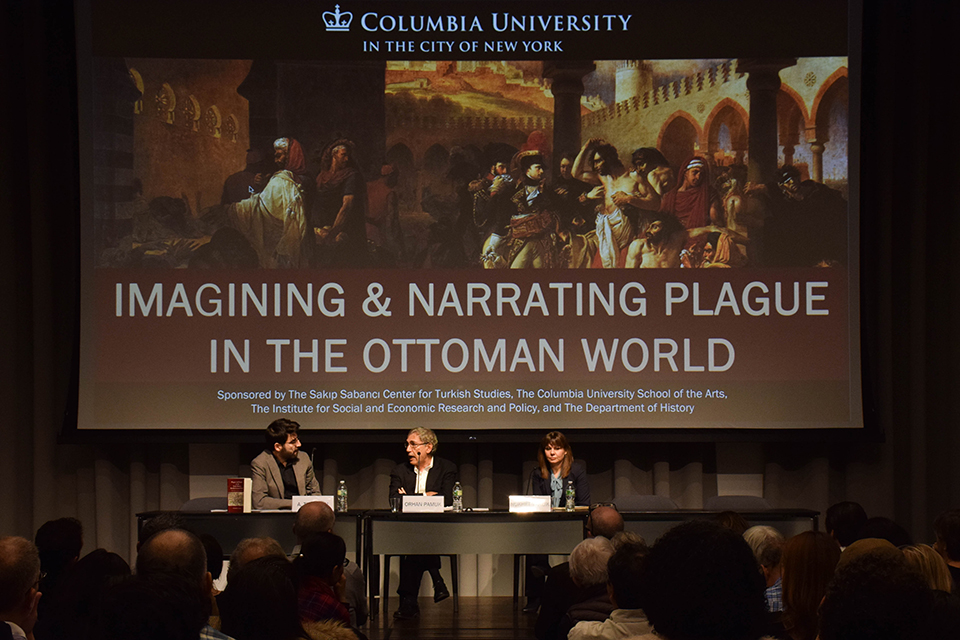 Empty houses are filled with the smell of rotting flesh. The rich have run to their country homes. What’s that noise? People peek out of their windows into deserted streets as pandemonium builds. Rumor has it, the plague has come to town. These visceral images are at the forefront of the writing of Orhan Pamuk and Nükhet Varlik.

On the evening of Monday, Nov. 12, the Columbia School of Journalism hosted Orhan Pamuk, Nobel Prize-winning novelist, and Nükhet Varlik, award-winning plague historian, for a conversation in Pulitzer Hall on narrating plague in the Ottoman world.

Pamuk won the Nobel Prize for Literature in 2006 and is the Robert Yik-Fong Tam Professor in the Humanities at Columbia. His translated works include “The White Castle,” which features an outbreak of the plague, “My Name is Red,” and “The Museum of Innocence.” The writer’s upcoming novel centers on an epidemic within a fictional Ottoman island in 1900.

Varlik is most well-known for “Plague and Empire in the Early Modern Mediterranean World: The Ottoman Experience, 1347-1600.”

For Varlik, studying the plague is, on a basic level, essential for the well-being of the human race. The bubonic disease should be interpreted as a continuum throughout history, up to modern day.

“Plague is a model infection,” Varlik said. “We tend to think of plague in the Middle Ages. Last year, there was an outbreak in Madagascar that resulted in the death of 200 people.”

The Black Death hit Europe in the mid-1300s, the Third Pandemic broke out in 1855 in China, and the homicidal microbe is still alive and well today.

Varlik points out the vital importance of studying the epidemic, as well as how nations and leaders react to these absurd events. Plagues are a natural apocalyptic experiment.

On the other hand, for Pamuk’s literature, the power of the plague should not be used as a tool to reach historical conclusions; it is beautiful in itself.

To be immersed in the individual experience of the plague, one needs to understand the terror of watching society decompose.

In this case, the Nobel Prize winner nods to author Daniel Defoe as doing some of the immersive grunt work already. Defoe’s 1722 novel, “A Journal of the Plague Year,” is an individual account about the experience of living through the plague in 1665. Pamuk quoted a passage in Defoe’s writing that reveals one of the plague’s key weapons: It breaks family ties. Family, the traditional structural core of community architecture, disintegrates as people desperately try to survive.

Although Defoe’s account is expressively useful for Pamuk, sources of plague in the Ottoman world are few and far between. During the conversation, Varlik pointed out that one needs to be creative in the absence of sources. Where specific areas—historical, literary, scientific—may lack resources, taking information from a multiplicity of fields is important.

Genetic testing of excavated bones is a relatively new method that can find traces of Black Death in DNA. Mapping the traces chronologically has allowed Varlik to thoroughly cartograph the evolution of the epidemic through historical periods.

Varlik found that the number of accounts on the plague experience rapidly increased by the 16th century. Physicians began recording the disease, civil registers took death tolls, and even biographies of Sufi masters recount offering spiritual assistance to release believers from sickness.

Nevertheless, Pamuk offered a witty, but insightful, opinion on why sources on the plague may always be deficient.

“It’s a very limited subject,” Pamuk said, “Partly because no one who had plague thinks, ‘Oh, I’m going to die in two days. Why don’t I keep a diary.’ No, no one did it.”

Hence, Defoe’s novel is fictional. It may be partially based on an uncle’s notebook, but to narrate plague in the Ottoman world requires imagination, since factual sources are incomplete.

This is where imagination has a chance fill in the gaps. Novelists, such as Pamuk, are handed the opportunity to craft the sensual and psychological experience of plague in the Ottoman world—a localised apocalypse.

“It’s not your own sickness; it is everyone’s sickness,” Pamuk said. “When you feel its presence, it’s so strong. It cannot be compared to anything else.”