CU Players’ ‘Almost, Maine’ served up a performance with enough cheese for Wisconsin

CU Players’ ‘Almost, Maine’ served up a performance with enough cheese for Wisconsin 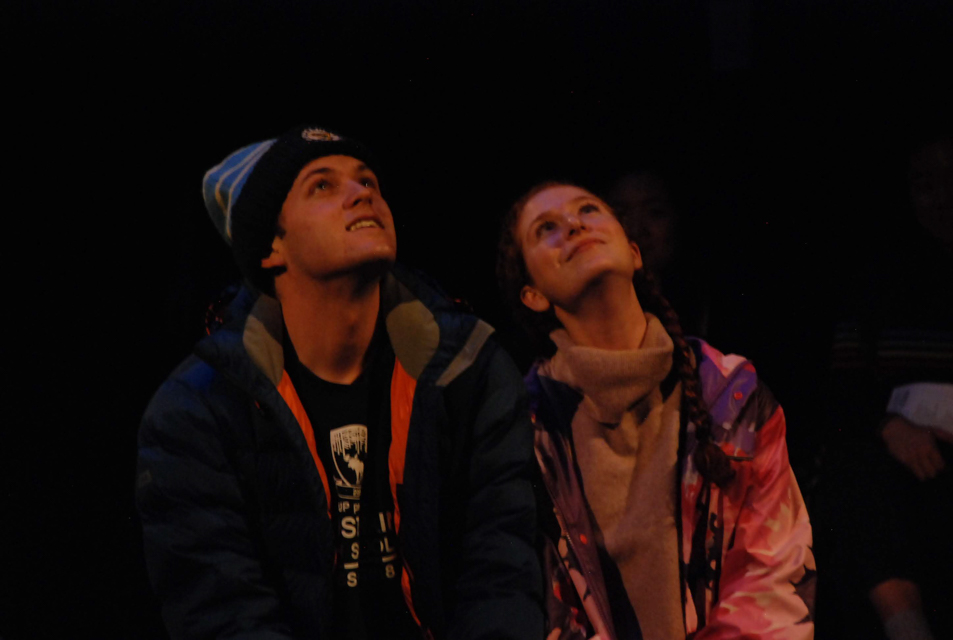 "Almost, Maine" entwined the romantic stories of nine couples living in the fictional town of Almost with a cozy atmosphere.

It’s almost that wonderful time of the year, and the CU Players brought an early sprinkle of that Christmas magic to Lerner Black Box over the weekend. The play was as corny as could be and it knew it, but the clichéd interpretations of love warmly heralded the merry season with a chuckle and wink to the audience.

On Nov. 16 and 17, CU Players performed John Cariani’s heartwarming comedy “Almost, Maine” directed by Alexandra Haddad, BC ’21. Cariani’s drama is set in the quaint fictional town of Almost and has nine separate short narratives, each with their own romance plot.

Actors were already in position for the opening scene as the audience took their seats. With several inches of snow layered outside Lerner Hall, members of the audience were comically similar in garb to the players, who were dressed in puffer coats and snowshoes.

On a wooden bench in the middle in Lerner’s Black Box Theater perched two lovebirds in woolly hats. They began the show timidly conversing in stunted sentences, turned away from one another.

When the girl, Sophie Freedman, BC ’20, shyly shuffled closer to the boy, Mitchell Thomas, SEAS ’22, looking for a level of physical intimacy, the boy picked up a plastic snowball prop and explained that the farthest one can be from another person is actually right next to them. Dragging one finger around the circumference of the snowball to elucidate his point, the lovestruck lass tiptoed off the stage, only wanting to be “closer” to the object of her affection. This moment of trite blind logic echoed the adorably blind love unraveling onstage.

For the rest of the play, Cariani’s short stories begged the audience to reserve judgement and indulge its playful corniness. And, oh wow, was the corniness entertaining.

Another scene saw two best friends, played by Elli Furukawa, BC ’19 and Brianna Johnson, BC ’21, arguing over who had experienced the worst date. While one friend confessed she had been blamed for smelling so bad her date had to evacuate his car, the other reminisced throwing her date too high into the air during a dancing lesson, consequently, and bizarrely, breaking his face. However, the real cheese came out as Furukawa’s character slipped when she tried to stand up.

“I fell,” she said. Then she slipped again. “I think I just fell in love.”

Cute (or queasy) moments such as these were delightfully accentuated by music from an acoustic playlist curated by Haddad and edited by Sound Designer Courtney Fulcher, CC ’21, that included The Maccabees’ tender single “Toothpaste Kisses.”

The final scene intertwined the nine narratives together as two members of Almost’s snowmobiling club, Dave, played by Harris Solomon, CC ’22 and Rhonda, played by Perry O’Parsons, BC ’21, broke out of their friend zoned relationship. Dave, giving Rhonda a self-made, blotchy painting of a heart, told his snowmobiling companion that he wants more from their friendship. Not only does he want more, but all sixteen characters that preceded them agree that Dave and Rhonda should be together. Once deciding their love story was written in the stars, the couple hurriedly started to strip all their clothes off—all nine layers of costumes that past characters wore.

While Cariani’s sweet mini plots do not exactly offer actors the role of a lifetime, it must be mentioned that Solomon’s comedic timing and stage presence—topped off with a gait like Shaggy from Scooby Doo—was superb in this production. His jokey mood suspended all notions of seriousness for the evening, allowing the love plots to appear simultaneously wholesome and goofy.

Dollops of heartwarming cheesiness saturated this performance of “Almost, Maine” and that’s what made it so effective. Love is cliché. Cariani knew there is nothing wrong with that when he wrote the play, and so did the CU Players.