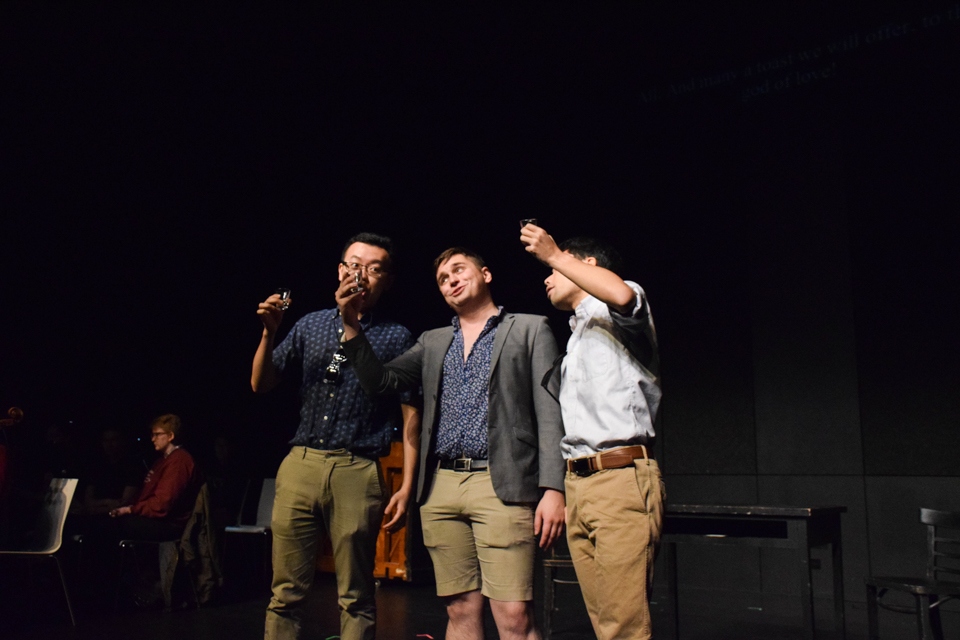 The New Opera Workshop performed a repertory concert with a modern spin over the weekend.

Mozart’s opera “The Magic Flute” is not about a lovestruck Boy Scout—at least, not traditionally. The Columbia University New Opera Workshop, however, is not afraid to stray from tradition. In NOW’s re-imagining of a scene from the classic opera, the lonely birdcatcher Papageno was clad in a khaki sash covered in badges, awkwardly wooing his Girl Scout crush, and it was nothing short of delightful.

NOW’s inclination toward innovation was evident throughout its production of nine repertory scenes, which spanned composers from Bizet to Beethoven to Columbia professor Matthew Ricketts. Presented in the Glicker-Milstein Theatre at Barnard, the program ran from November 29 to December 1.

Although each scene in the collection was brought to life by a different director, they all demonstrated NOW’s commitment to making opera accessible to today’s audiences. In a scene from Georges Bizet’s “Carmen,” Frasquita, played by Gabrielle Ferrari, GSAS ’22, and Mercedes, played by Cleome Barber, BC ’20, read their fortunes from a deck of cards. They wore contemporary costumes and sang the French text in a conversational, even gossipy tone. One could imagine Frasquita and Mercedes sitting on Low Beach, reading their horoscopes in Seventeen magazine or taking BuzzFeed quizzes to learn their fates.

Audiences were likely familiar with the bridal chorus from Richard Wagner’s opera “Lohengrin”— the tune of “Here comes the bride, all dressed in white”—even if they weren’t aware of its origin. However, they might not have been familiar with all the wedding customs represented in NOW’s performance of the piece, including group waltzing and stepping on glass. Director Rebecca Miller, SoA ’21, re-imagined the scene to reflect a multicultural world. Likewise, a blink-and-you-miss-it moment of dabbing and an Instagram-worthy photo-op firmly situated the scene in 2018.

By far, the most contemporary scene in the collection was from Ricketts’ 2012 opera “No Masque for Good Measure,” presented by NOW in its American premiere. While it was sometimes difficult to follow the action—despite the fact that the scene was written in English—there was never a dull moment. The Tenor, played by Carl Lian, GSAS ’20, burst onstage in a white bathrobe and sunglasses, a snake plushie draped across his shoulders. The reality-TV-style antics only escalated from there.

The repertory style allowed NOW to not only explore a wide range of operas, but also showcase its many talented performers in roles that suited them well. Sarah Fleiss, CC ’21, was a standout as Carmen in the scene from Bizet’s opera of the same name. Her warm, resonant voice filled the GMT as she sang of her imminent death, tears burning in her eyes. Callum Blackmore, GSAS ’23, was hilarious as Papageno in “The Magic Flute,” perfectly capturing the mood swings of an adolescent fielding first love. Jessica Edgar, CC ’19, displayed her stunning voice in a scene from Mozart’s “Don Giovanni.” The final chorus of that piece, when the singers’ voices swelled with the orchestra, was simply thrilling.

The orchestra, led by music director Katie Cooke, CC ’19, was consistently impeccable, a common thread running through the diverse collection of scenes.

It’s rare to see opera staged in such an intimate space as the GMT. The audience was so close to the action and the inventive staging of each scene, and the result was an approachable and engaging production. In a scene from “No Masque for Good Measure,” Ricketts pokes fun at opera, writing, “Who on Earth would sit through such a thing?” If every production was as enjoyable as NOW’s fall repertory, more people would sit through opera—and more often.