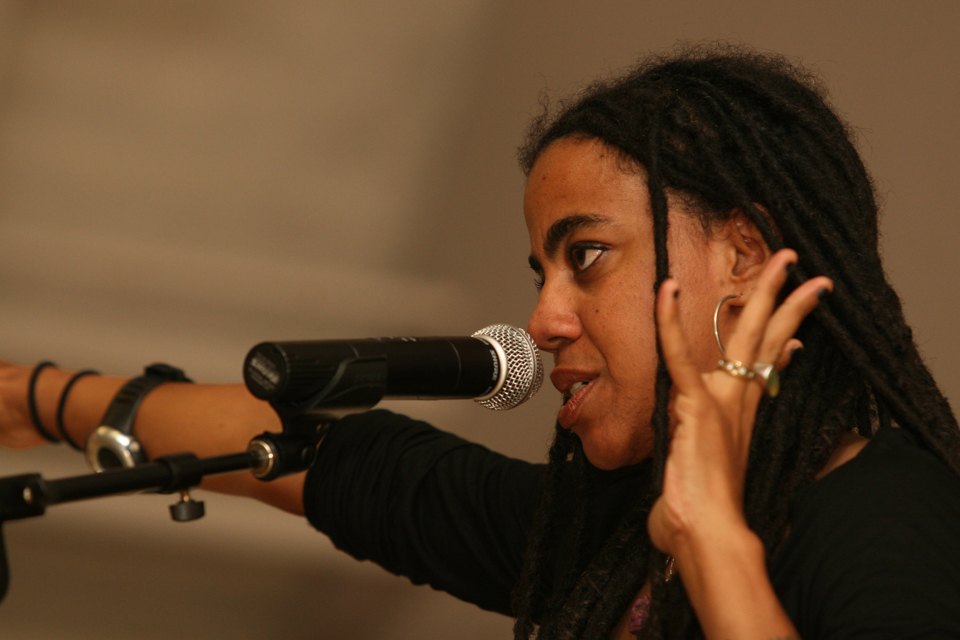 Suzan-Lori Parks was the first African-American woman to win the Pulitzer Prize for Drama.

Suzan-Lori Parks says that some have likened her forthcoming play “White Noise,” to getting your skin peeled off, layer by layer. But Parks’ works, while often an amalgamation of the provocative, unsettling, disturbing, and even upsetting, still remain a method of course correction, a way to heal through narrative.

On November 28, as the inaugural speaker for the department of medical humanities and ethics—the newest department of the Columbia Vagelos College of Physicians & Surgeons—Parks spoke in conversation with department chair Dr. Rita Charon, the creator of the field of narrative medicine. They explored this medical approach, one that considers and utilizes patients’ personal narratives in clinical practice, research, and education to promote healing, in relation to Parks’ works and the dramatic arts.

As a playwright, screenwriter, musician, and novelist, Parks has led a highly diversified and acclaimed career; her works repeatedly push the bounds of realism, lyrical narrative, and rewriting theatrical norms.

Her variegated repertoire includes the plays “Father Comes Home from the Wars (Parts 1, 2, and 3),” and “The America Play,” as well as the adapted screenplay for “Native Son,” a 2019 Sundance Festival selection. She is a recipient of the MacArthur Foundation “Genius” Grant, the first African-American woman to be awarded the Pulitzer Prize for Drama (for Topdog/Underdog), and most recently, the winner of the Steinberg Playwright Award, an accolade which has been equated to “winning the Nobel Prize, but for playwriting.”

Parks was chosen by the department in order to emphasize its commitment to “addressing racial justice, bias in healthcare, and cultural and political polarization,” according to the program of the event. The department chose to invite a playwright—rather than a clear-cut medical professional—in order to utilize a narrative-centered form of presentation, focusing on the power of words and the arts in regards to highlighting the truths and transformations of the human experience—especially in an increasingly technological medical landscape.

“Do they know I’m a fan of yours?” Parks said to Dr. Charon with a smile, opening the conversation portion of the evening. The two women met some years ago at an event much like this one, Parks attending a lecture given by Dr. Charon. Both fans of each other's work and residents of the same neighborhood, they became fast friends.

Charon began by working through the relationship between the dramatic and the physical, noting how plays help us understand questions about living in bodies, and, more intimately, consider gender, race, age, and ability. Parks continued, musing on the fluidity of the experiences that our bodies have, and their presentation in dialogue and on the stage.

“As a playwright, most of my work involves giving ... all people a place to be,” Parks said. “So when you write a play, you’re imagining people sitting on a stage—what are they wearing, what are they talking about, what are they wrangling with? And maybe they’re subjects that are too difficult or complicated or [have] too many layers and are hard to talk about with people you actually know.”

She continued by expanding her focus from the individual’s experience to when multiple experiences meet head-on.

“Theater gives us a safe place to have some very difficult interactions,” Parks said. “We can go back in time, we can go into the future, we can populate our plays with all sorts of people, and collide them like…”—she searched for a word—“boom!”, vigorously pantomiming an exploding motion with her hands.

“Theatre, and all of art, is a device for healing. ... There’s an examination of the self that can happen when you see someone going through difficulties, trials, and tribulations, what have you,” Parks said.

Charon then proposed to Parks how the department, and narrative medicine in general, moves to overcome the barriers of the social determinants of health, constantly reaching towards equity. She asked Parks: How do her works improve our capacity as the aforementioned collisions to actually move towards racial and social justice?

The evening then transitioned into a staged reading of two excerpts from Parks’ works. First, “Topdog/Underdog,” Parks’ most recognized work, which depicts brothers named Lincoln and Booth as they navigate their relationship, featuring actors Motell Foster and Curtis Morlaye.

Next was an exclusive excerpt from “White Noise,” Parks’ newest and yet-to-be-released work, set for a debut at the Public Theatre this spring. This scene featured an increasingly chaotic monologue by actor Chris Herbie Holland, portraying protagonist Leo. Leo harps on sleepless nights incurred when, at five years old, he experienced an existential crisis of sorts, discovering that the sun will one day die. A white noise machine becomes the only remedy. Yet, the noise persists, reverberating in his head daily, inhibiting his work as an artist, and again, inciting insomnia.

Perhaps the rarest element of the evening was, as an audience member suggested during the concluding question and answer, the opportunity to observe a playwright watch her work come to life. Parks’ face remained poised during “Topdog/Underdog,” a 17-year-old play she undoubtedly has witnessed many a time. However, during “White Noise,” she was especially transfixed, her face molding from an expression of pointed focus to one of pleased delight with each of Leo’s musings, perhaps mentally noting certain revisions all the while.