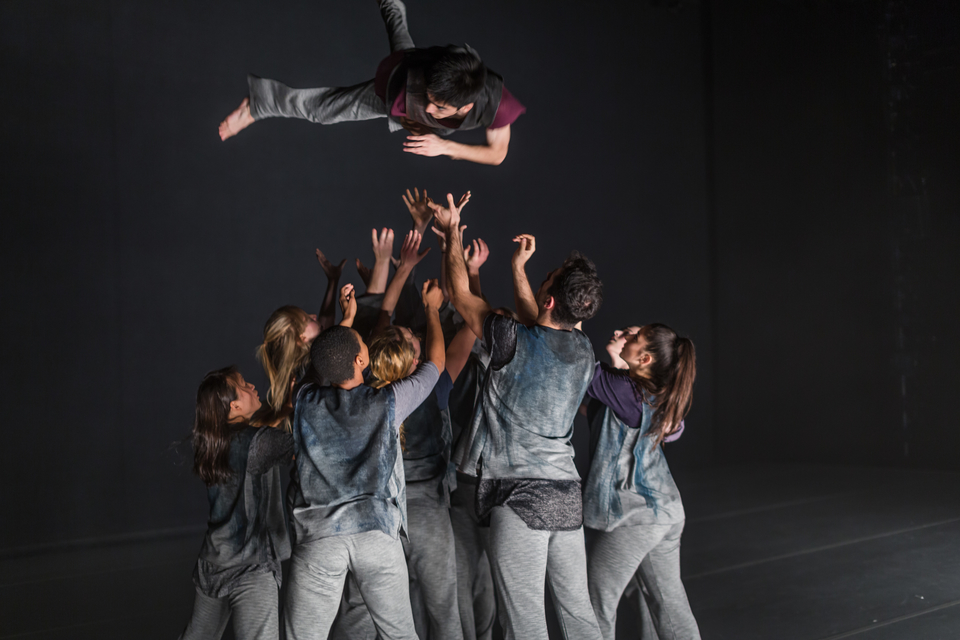 ‘-3RSSSS - (L-S)RSS + RS - π(R) = 0 where π(R) = 4-3 P/ AQR = -(2-3/A)dhui/DR’, better known as the ponytail equation, is a mathematical equation that models the swelling of a ponytail as the hair interacts with atmospheric forces. It’s also the title of a choreographed dance by Adrienne Truscott, which was second in the lineup performed by the Barnard/Columbia Dance Troupe at New York Live Arts.

From Nov. 29 to Dec. 1, dancers from all of Columbia’s undergraduate schools showcased four distinct pieces. The NYLA showcase, organized by the Barnard dance department, is now in its 14th year, and this time, it featured were dances by Amy Hall Garner, adjunct professor at NYU, Truscott, a Doris Duke Impact Artist, Merce Cunningham (d. 2009), renowned avant-garde experimentalist choreographer, and David Dorfman, professor at Connecticut College.

Garner’s “Ladylike” began the evening with its elegant ballet-style movements. Backed with a medley of big band jazz including both Duke Ellington and The Count Basie Orchestra, “Ladylike” both lulled and thrilled.

Arms outstretched like blossoming flowers, dancers glided across the stage in circular patterns. Soft hues of orange and blue lighting worked in tandem with the smooth motions of the dancers, gently highlighting lines of muscle here and there.

The next dance could not have contrasted more.

Experimental, fragmented and infrequently interrupted by pithy lines of dialogue from the dancers, Truscott’s composition allured with its unorthodox concentration on the symbolism of the ponytail (hence the origination of the unusual title). One dancer, comparing her middle parted ponytail to that of a colonial boy, stated her hairstyle to be linked to the declaration of independence.

Truscott’s unique method of critically prodding objectifying attitudes towards the female body was paired with unexpected and comical activities. At points, music stopped, a deep ticking noise began, and dancers would reach into colourful plastic trash bags tied around their waists to pull out a snack. Static for a brief moment, they would then proceed to chow down.

To finish off the embodied adaptation of the ponytail equation, the troupe climbed into the audience, stepping from armrest to armrest over the heads of the audience.

After the intermission, a MinEvent—a collage of abbreviated versions of various choreographed works by Cunningham—collected from the works of Merce Cunningham, three of which were performed at a 1976 Barnard recital, took over the stage. Dressed in green and orange unitards, the dancers executed Cunningham’s composition to the jarring musical accompaniment of Robert Boston—a composition made up of blips of white noise and scratchings of a metal rectangle played live, downstage right.

The set took a middle ground between the fragmented style of dance Truscott explores and the elegant, smooth style of Garner.

The final dance, ‘Fog’ by David Dorfman, unleashed a plethora of dance styles from experimental movements to structured ballet forms. Technical kicks accompanied by whimsical vocalised lines such as “I want to date. Or perhaps, I want a date” electrified the air around the theatre simply due to the extraneous effort being expended. The twenty performers were all sweating vigorously as they constantly shifted from synchronised segments of dance to focused solo periods. Dancers metamorphosed into sardines as they rolled over one another and slammed their bodies flat against the upstage wall. It was energized, fast-paced, and frankly, a banging climax to the evening.

This Barnard/Columbia Dances performance was capped off by the acknowledgement of Professor Katie Glasner’s retirement from her position as dance department chair. Glasner has served the Barnard dance department since 1998 and will continue to teach next semester. The performance was profoundly entertaining with dances ranging from the experimental to the traditional, serving a multifarious concoction of compositions.