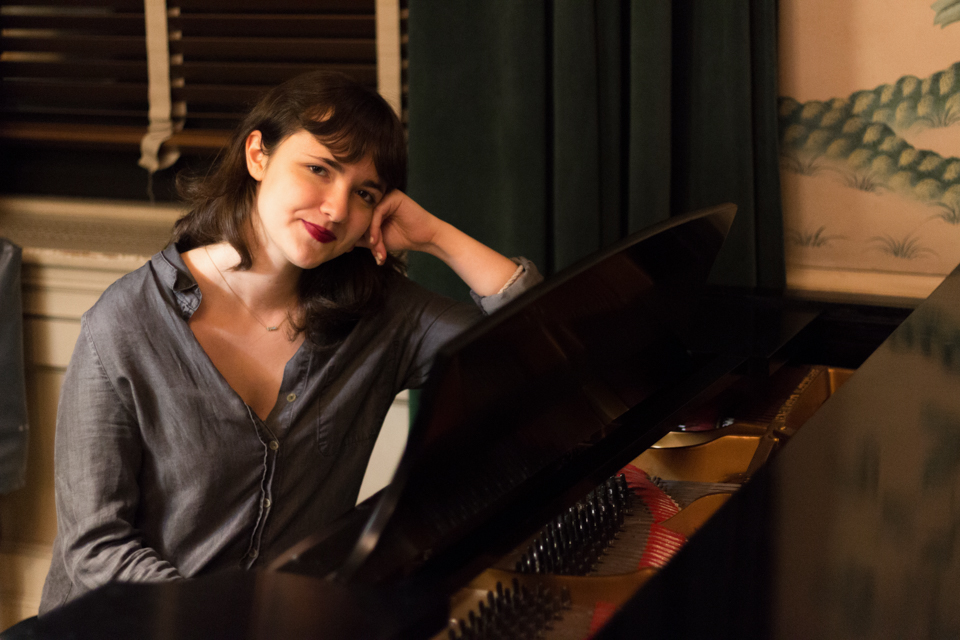 Since accepting the position of Barnard Balladeer, Gordon has written an average of three songs per semester relating to current events on campus as well as overarching themes that she feels are relevant to a majority of the college’s population.

Eden Arielle Gordon, BC ’19, and Talia Lakritz, BC ’16, met at an open mic downtown where they were both performing during their first and senior years, respectively. The two singers did not realize at the time that they would later share the title of the Barnard Balladeer, a position created for Lakritz during her senior year and passed on to Gordon upon her graduation.

The Barnard Balladeer is a student selected by the college to compose and sing original songs that seek to reflect the experiences of being a student at Barnard. Lakritz was chosen as the inaugural Balladeer after Barnard Communications came across her YouTube channel featuring a number of original songs. Lakritz and the Communications office worked together to establish a framework for what the position could entail, including the title it would carry.

“[Barnard] came up with two options. One was the Barnard Songstress and one was the Balladeer, and I said, ‘Balladeer sounds great.’”

During her year as the Balladeer, Lakritz wrote and performed songs for back-to-school season, a farewell to Lehman Hall—which was demolished during her senior year—and a holiday collaboration with Bacchantae, Barnard’s all-female acapella group, among others. Her final song, “Where It Begins,” written to commemorate the class of 2016, was played at Radio City Music Hall during that year’s commencement.

“Barnard is a place that encourages all of its students to use their voices, whether that’s a speaking voice or a singing voice. I came from a religious community growing up where women were not really permitted to sing in front of men, so it felt like a very full circle moment,” Lakritz said. “I came to Barnard to find a place that was really empowering for women, [so] then to finish out my time at Barnard by singing songs about it meant a lot to me.”

When the time came to find a successor for Lakritz, Communications approached Gordon, then a junior, after they came across a video of her first-year performance at the Riverside Park “Make Some Noise!” festival. She had been composing since high school, and saw the position as an opportunity to expand her songwriting experience by writing for someone other than herself.

Since accepting the position, Gordon has written an average of three songs per semester relating to current events on campus as well as overarching themes that she feels are relevant to a majority of the college’s population. These have included “Dear Ms. President,” a song to commemorate the inauguration of President Sian Beilock in February, and “More Than Numbers,” written to remind students of the dangers of stress culture.

The position’s novelty has allowed Gordon to continue molding it based on her personal interest while being cognizant of the fact that she will never capture every perspective on campus.

“I certainly couldn’t be a voice for the whole campus,” Gordon said. “I like to put in little critiques of the school in songs, so that’s been interesting. It’s a thin line between whether I’m singing for Barnard or working for Barnard. It’s been interesting navigating the position, because I didn’t want it to be just a Barnard propaganda position.”

For Lakritz, navigating the opportunity that music provided to express criticism of the college was never at odds with her excitement over expanding her musical repertoire.

“I think criticism of a place and love of a place are not mutually exclusive,” Lakritz said. “So those things to me are not in conflict. Just because I love Barnard and loved writing songs about it doesn’t mean that every minute there was perfect, or every interaction I had with administration was always perfect.”

Currently, Gordon, who was inspired by Lakritz’s farewell to Lehman, is composing a song about the Milstein Center, which opened this fall in the same place Lehman once stood.

“I think that everyone comes [to Barnard] because they do believe in something,” Gordon said. “That’s kind of the goal for the Milstein song. Yeah, it’ll be about the library, but also about the student possibilities and potential. We need the thought that’s going to happen in that library.”

Gordon believes that music can serve both as an outlet for personal expression as well as a vehicle for bringing the student body together.

“I would love to see people, especially Barnard students, be less afraid of forming bands, getting together, going out and playing,” Gordon said. “I have a theory that everyone here writes songs in their bedroom.”